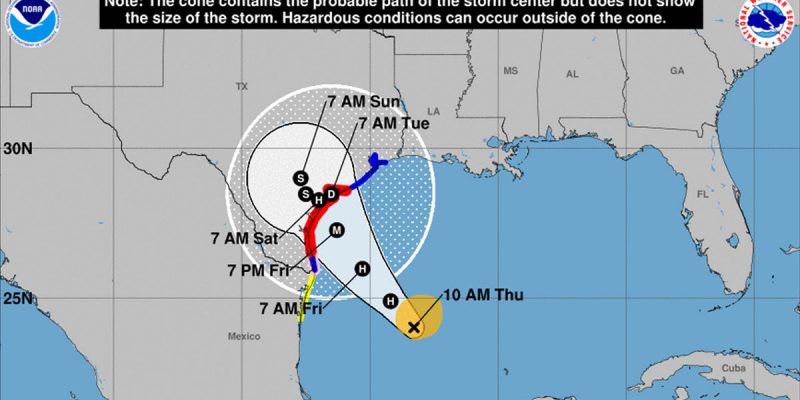 …at least, that’s what the forecasters are now projecting. Previously, it wasn’t considered likely that Tropical Storm Harvey would become Hurricane Harvey, but that has changed. The latest bulletin on the storm from the National Hurricane Center, from just a half-hour ago…

A Storm Surge Warning means there is a danger of life-threatening inundation, from rising water moving inland from the coastline, during the next 36 hours in the indicated locations. For a depiction of areas at risk, please see the National Weather Service Storm Surge Watch/Warning Graphic, available at hurricanes.gov. This is a life-threatening situation. Persons located within these areas should take all necessary actions to protect life and property from rising water and the potential for other dangerous conditions. Promptly follow evacuation and other instructions from local officials.

A Hurricane Warning means that hurricane conditions are expected somewhere within the warning area. A warning is typically issued 36 hours before the anticipated first occurrence of tropical-storm- force winds, conditions that make outside preparations difficult or dangerous. Preparations to protect life and property should be rushed to completion.

A Tropical Storm Warning means that tropical storm conditions are expected somewhere within the warning area within 36 hours.

A Storm Surge Watch means there is a possibility of life- threatening inundation, from rising water moving inland from the coastline, in the indicated locations during the next 48 hours.

A Hurricane Watch means that hurricane conditions are possible within the watch area.

A Tropical Storm Watch means that tropical storm conditions are possible within the watch area.

In addition, interests in southwestern Louisiana should continue to monitor the progress of this system.

DISCUSSION AND 48-HOUR OUTLOOK
——————————
At 1000 AM CDT (1500 UTC), the center of Tropical Storm Harvey was located by an Air Force Reserve Hurricane Hunter aircraft near latitude 24.0 North, longitude 93.3 West. Harvey is moving toward the north-northwest near 10 mph (17 km/h). A turn toward the northwest is expected later today, and Harvey’s forward speed is forecast to slow down during the next couple of days. On the forecast track, Harvey will approach the middle Texas coast on Friday and make landfall Friday night or early Saturday, and then stall near the middle Texas coast through the weekend.

Data from the Hurricane Hunter plane indicate that maximum sustained winds have increased to near 65 mph (100 km/h) with higher gusts. Rapid strengthening is forecast, and Harvey is expected to become a major hurricane before it reaches the middle Texas coast.

Tropical-storm-force winds extend outward up to 90 miles (150 km) from the center.

The minimum central pressure based on reconnaissance data is 982 mb (29.00 inches).

STORM SURGE: The combination of a dangerous storm surge and the tide will cause normally dry areas near the coast to be flooded by rising waters moving inland from the shoreline. The water is expected to reach the following heights above ground if the peak surge occurs at the time of high tide…

The deepest water will occur along the immediate coast near and to the northeast of the landfall location, where the surge will be accompanied by large and destructive waves. Surge-related flooding depends on the relative timing of the surge and the tidal cycle, and can vary greatly over short distances. For information specific to your area, please see products issued by your local National Weather Service forecast office.

SURF: Swells generated by Harvey are likely to affect the Texas, Louisiana, and northeast Mexico coasts by Friday. These swells are likely to cause life-threatening surf and rip current conditions. Please consult products from your local weather office.

If there’s any good news to be had in this it’s that the bulk of the storm’s winds will miss the Houston area and spare the highest concentration of people. But Houston is going to get a very large rain event, and flooding this weekend is likely.

What we don’t know is what will happen after Harvey makes landfall. Some projections had it bouncing back out into the Gulf and maybe smacking into Louisiana later, but now it looks like it might embed deeper into Texas and turn into a big rainstorm through the central part of that state before sweeping east through the southeastern part of the country.

Either way, Texas and Louisiana are going to catch a lot of rain. And it looks like a very good thing that the LSU-BYU game scheduled for NRG Stadium in Houston is on tap for a week from Saturday rather than this weekend.

Interested in more news from Texas? We've got you covered! See More Texas News
Previous Article Kip Holden Is Explaining Why We Don’t Want Him Back As Baton Rouge’s Mayor
Next Article What Will The Confederate Monuments Debate Look Like In 500 Years?