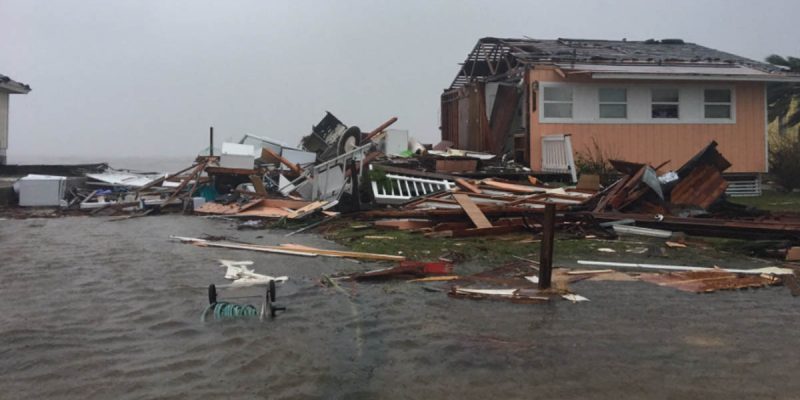 Hurricane Harvey is now on land, having come ashore just north of Port Aransas, Texas and then slamming into Rockport, Texas with full force as a Category 4 storm late Friday night with winds as high as 132 mph. As of this writing the storm is crawling north at 2 mph with 75 mph winds, with the eye located 25 miles west of Victoria, Texas and dumping very large amounts of rain all over southeastern Texas.

And here’s what Harvey looked like on the ground at various locations along the coast – specifically Houston, Corpus Christi, Port Lavaca, Brownsville and Victoria…

Thankfully, so far there are no reports of loss of life, though damage estimates now run from $1-2 billion so far. Rockport and nearby Fulton, which are across Nueces Bay from Corpus Christi, were extremely hard hit…

Rockport Mayor Charles “C.J.” Wax told the Weather Channel on Saturday that the storm hit his community “right on the nose” and left “widespread devastation.”

Wax said emergency response for the city of about 10,000 people has been hampered by the loss of cellphone service and other forms of communication.

We are stuck in the town of Rockport all roads are blocked due to high water & debris .#txwx #hurricaneharvey2017 pic.twitter.com/UOTx6MuZWJ

Storm chaser Jeff Piotrowski’s Twitter feed has been a fascinating source of first-hand information, including compelling video and still photos of the storm’s attack on the areas north of Corpus Christi where it made landfall. Piotrowski and his crew were actually under the eye of the storm late last night, and there was concern at one point for his safety since cell service went down north of Corpus Christi.

Interested in more news from Texas? We've got you covered! See More Texas News
Previous Article BAYHAM: How Latvia Got It Right (and New Orleans Got It Wrong)
Next Article It’s Likely The LSU-BYU Game Will Be Played In The Superdome, But Here Are The Five Options…