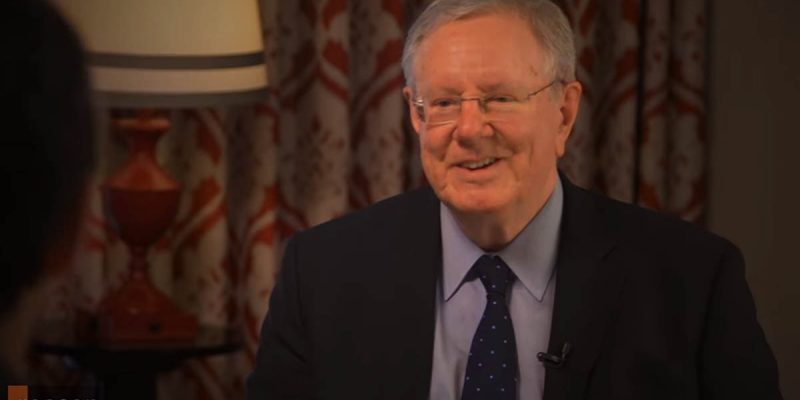 “We don’t see business as evil,” says Steve Forbes, marking the 100th anniversary of Forbes magazine, the iconic business publication started by his grandfather. “We see it as a noble undertaking.”

What follows is a 16-minute interview Reason.tv’s Nick Gillespie does with former 2000 presidential candidate and publisher of Forbes magazine Steve Forbes, and it’s well worth your time. Forbes, who just turned 70, gets into some interesting stories about his grandfather B.C. Forbes, a Scottish immigrant who traveled to New York by way of South Africa, including one we love – he couldn’t get a job as a business writer in New York, so he offered to work for free with one publication in order to prove himself, and then after he was successful in doing that he went to work for another publication under an assumed name and did both gigs at the same time, which led to an amusing fight the publishers of those papers had over which business writer was better (they were both talking about B.C. Forbes).

But Forbes goes beyond just talking about the publication, and where the interview gets really interesting is his advice for Donald Trump. He notes that while the regulatory changes the president is making are extremely important and that those will make a huge difference in the performance of the economy, Trump needs to recognize that legislative success isn’t a one-off proposition – it’s better to nibble away at the kind of changes you want and make tangible progress than to put all your chips in the middle and roll the dice.

Forbes also pleads, though sadly he doesn’t seem to have a majority of policymakers on his side, for sound money – noting that a stable money supply arising from the gold standard led to growth rates from the founding of the country to the 1970’s which were unprecedented in world history, and had America maintained that economic growth through the protection of a stable currency this economy would be 50 percent bigger than it is and many of our social problems would not exist at current levels.

It’s a great interview, and it really makes you wonder what might have been had Forbes’ 2000 presidential campaign taken off the way Trump’s did in 2016.