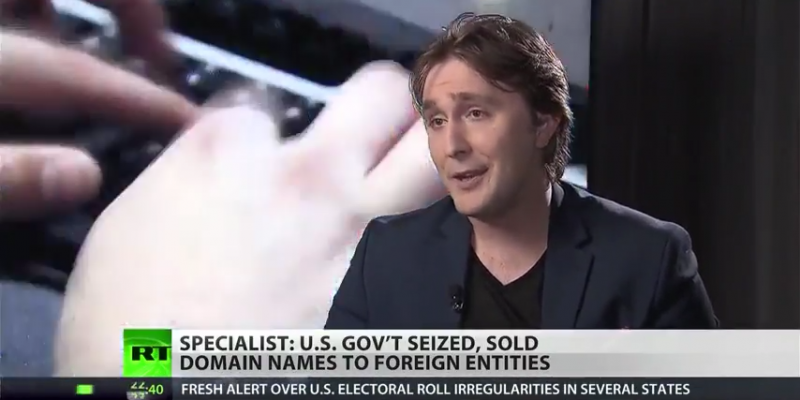 WASHINGTON, D.C. — After 100 days in office, President Donald Trump is still the target of endless false reports claiming that Russia “hacked” the U.S. presidential elections. While “Red scare” conspiracy theories may be no cause for alarm, America faces new and far more serious cybersecurity threats.

The Obama administration gave away U.S. ownership of the Internet to an international organization known as “ICANN” Oct. 1, 2016 — exposing America to increased risk of cyberattack and online censorship by anti-democratic regimes who will now have an equal claim on the administration of the Internet. America left a power vacuum, and unsavory characters are stepping into the void.

Russia Today (RT) has the story.

“The current media world is buzzing with everything cyber-related. But the U.S. giving up its domain-name assets to foreign governments, however, is not as sexy as unproven hacking [Russian] allegations,” reported RT’s Alexey Yaroshevsky.

“Domain names,” says by Yaroshevsky, are the foundation of the internet. DNS (the system that converts domain names into recognizable websites) is even called the “yellow pages” of the Internet in a story at The Daily Caller.

Whoever owns the largest number of domains controls the Internet, and what people see on it, Yaroshevsky explains:

“Imagine the Internet as a housing market. So, in this case, the dot coms would be the large elite houses, the villas, while all other domains would be affordable, cheap housing. But imagine an individual with bags of cash suddenly buying up all the property in a neighborhood. Easy to imagine that in either case, that individual would have a major say in how things are run in such a community.” [Emphasis Added]

And America is giving away its edge in domain name ownership — to China, according to the Huffington Post. Federal courts in Texas illegally seized Dallas resident Jeff Baron’s $100-million-dollar internet company, and then sold many of his 1 million domain names to Communist China.

Baron is an Internet pioneer who, on a shoestring budget invented technology competitive with Google during the early days of the Internet, according to The Daily Caller. He became incredibly successful and had web sites with over 1 million visitors per day and monthly traffic of 50 million. [RELATED: Federal Judge Declares Constitution Void, Threatens Civil Defendant With Death]

“WHY IS AMERICA DOING THIS TO ITSELF?” YAROSHEVSKY ASKS.

“The most bizarre part is that America is doing this to itself, by letting go of the U.S. government’s grip of the domain name system (DNS) last year to a nonprofit company called ICANN, which has governments and foreign businesses among its stakeholders,” Yaroshevsky remarked.

“The American government has stood behind the Internet historically, and that’s what has made the Internet what it is today. So, simply restoring the system we had, would do a lot to alleviate these issues.”

Baron and other concerned Americans are “waiting to see whether Trump’s administration will take any steps at all, to make the Internet ‘American’ again,” RT concluded.