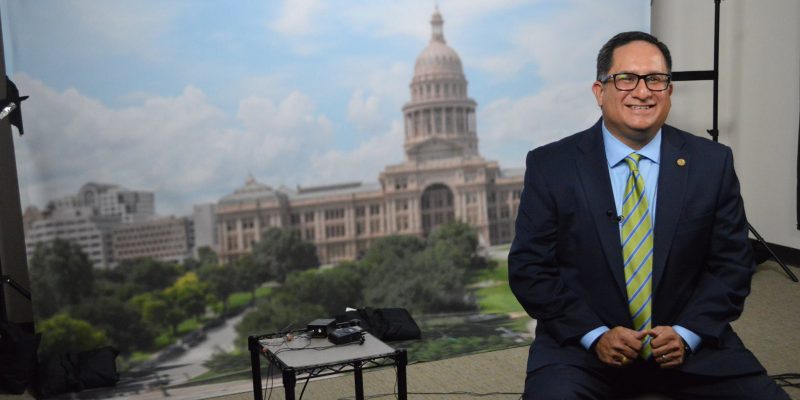 As we enter the 2018 primary series here in Texas I want to introduce you to the public servants that are retiring and those stepping up to run. These will all have similar questions and hopefully some interesting answers. You will see direct quotes from the politicians themselves. For this first Q&A I interview my own state representative, Larry Gonzales. I just moved to his district so I did not get to know him well. At the recent Williamson County Republican Executive Committee meeting Larry Gonzales announced it was time to step down and he would be done. Here is his exit interview.

What drove you to run the first time?

Two things: First, for the first time in almost two decades, we had a Democrat elected to office in Williamson County. They were ecstatic, and were convinced they had a beachfront in a solidly red county in Texas. They were planning to use that win as a springboard to wins across the county. That win for them was a fluke, and we had to set out to prove it was. I never had any intention of running in 2010. I was trying to find the right person who could be our candidate. It became clear several weeks into a search, that candidate was me. And so we decided to run. Secondly, we were being obedient as a family — we were called to run and were supposed to run.

What positions had you held before that?

Elected, none, but I had been in the state capitol for about 16 years working as staff in the Texas House, Texas Senate, Lt. Governor’s office, the Office of the Attorney General, and Texas State University System. I have worked for John Cornyn, Rick Perry, Wayne Christian, Kevin Brady, John Otto, Jim Pitts and many more.

How has your view of the Texas House changed?

How has Larry Gonzales changed?

I am more mindful, more aware, and my eyes are more open to the real world difficulty Texans face everyday. I have been in that pink building in a variety of capacities for 26 years, and to this day, when I open a new door, I find ten more doors. When I open one of those doors, I find ten more. This state is complicated, and very diverse, and the answers to our problems are not easy. I have learned a lot, and for that, I’m a better dad, husband, business owner, and community member for serving.

What policy shifts have you made as you have been part of the legislature?

I have voted for some of the most amazing and powerful policy shifts in Texas history. Governor Abbott called the 2015 legislative session, “The most conservative legislature in Texas history.” The pro-life laws we passed were significant as we continue the march to protect the lives of the unborn. What we accomplished with tax reform has put more money into the pockets of hard working Texans. And of course, our efforts on border security are unprecedented. When the Obama administration refused to do their jobs, Texas legislators stepped up and helped protect the people of Texas from drug cartels, human trafficking, international gangs, and illegal weapons smuggling.

What are some of Larry Gonzales’ favorite bills you passed?

There are so many! We did good work. Legislation which made possible the Round Rock Sports Center and the soon to be opened Kalahari Resort are big wins locally. The money coming into our city from those visitors helps keep our taxes very low. Obviously, serving as the Chairman of the Sunset Commission and passing the Railroad Commission Sunset bill and the Texas Department of Transportation Sunset bill were globally important to our Texas economy. But my favorite bills were the special education bills we passed. Virtually nobody knows what we did, but those bills are what being a good legislator are all about. THOSE BILLS deserve their own blog post! That’s the real stuff.

What are your favorite moments on the floor?

What about behind the scenes? (Larry Gonzales would not open up. But I will keep trying for the future)

Sorry, man. Those are forever private.

What doors back home did serving open for you?

None, really. I was very well established and known in this community long before I ran for office. I may have carried the “Mr. Chairman-Chairman” title in Austin, but I was always more comfortable and proud to be “just Larry” back home.

How did your family hold up as your served?

They held up great. My wife and in-laws were real troopers doing so much of the daddy things when I was not around — which was a lot. My daughter, 17-year-old Leah, always understood what I was doing and why I was doing it. Alexander, age 15, well, that kid just rolls with the punches, never saying anything negative. But make no mistake, it is time to be home. We started this journey together in late 2009, and eight years later, the family is fine, but it’s time.

Any advice for those running?

Be mindful of the needs of your district. You do not work for the governor, you do not work for the Lt. Governor. You are only responsible to the voters back home, the ones who sent you to Austin. It’s very easy to get caught up in the “Austin of things,” but don’t. You stay true to those who sent you there, and you stand strong for the values of your district, no matter who tries to tell you otherwise.

What do you wish you knew when you first stepped up?

I had been around as staff for so long, and I made my entire career in GOP campaigns, so I don’t feel I was caught off guard by anything. But to the spirit of your question, potential candidates need to know this job will cost you a fortune of personal income and precious time with your family you will never get back. I wish I could talk to all potential candidates and tell them just how difficult this job is and what they will lose. As a matter of fact, I used to do candidate recruitment for the Republican Party of Texas. They asked me not to come back because my honesty and truthfulness was convincing people NOT to run. Seems I was the only person being honest, I guess.

Tell us some of the funniest moments from your time in office.

Most of my funniest stories start the same way: “So, we were on the House floor, late at night, and people were really cranky…” After that, any number of stories which will remain solidly “in the vault” happened!

What are your biggest regrets from your time in the House?

Easy — the time I spent away from my family. Hands down, biggest regret.

What bills did your vote for that you wish you hadn’t and why?

At this point, I can’t think of any. There were two or three I was really worried about, wondering if I had made the right vote, but all these years later, it’s fine. Texas has a way of solving problems. I’m OK with my votes.

What bills do you wish you had been able to pass?

Of my personal bills? I passed what I needed to pass. What did not pass, I understand why. Legislation is really tough to pass, the system is designed that way. Any good piece of legislation can take years to get right. I don’t get too worked up over bills that do not pass — I’ve been around long enough to know a good idea will have a second, third, or fourth chance. Sometimes, the cookie is still raw in the middle.

Tell us about the people that impacted you the most.

The people of Texas House District 52. People here are wonderfully diverse in so many ways! I love it. I have learned so much from everyone here. There are many different needs and so many ways to get involved and make an impact in our local communities. I have watched these communities grow over the years in every way imaginable. I believe we have all grown together.

What do you hope the legacy of Larry Gonzales will be?

I hope my legacy is that I worked hard, I listened to and represented the people of House District 52 well, and that I stood tall and fought for our values.

Rest my tired body, rest my mind, and then in October, maybe November, get my life back to the wonderful place it was when I stepped up and ran for office. I am proud and honored to have served, but this job does not define me. This was never intended to be a long term gig for me, nor is it supposed to be. I was “Larry” long before I was “the honorable,” and I’m fine being just “Larry” again. As a matter of fact, I’m looking forward to it.

Many thanks to Larry Gonzales for taking the time to answer these questions. Currently, Jeremy Story and Christopher Ward have stepped up to run for Texas House District 52. With Larry Gonzales announcing his retirement more are expected to soon jump in the race.
Do you know a candidate that has just announced they are running? Do you know someone retiring? Shoot me an e-mail at [email protected] so I can cover their campaign as well.
Interested in more news from Texas? We've got you covered! See More Texas News
Previous Article Pro-Life Leader Kyleen Wright Attacks A Mom’s Kids To Defend Rep Cook
Next Article In Case You’re Not Clear On Why Texas A&M’s Loss To UCLA Was So Catastrophic…