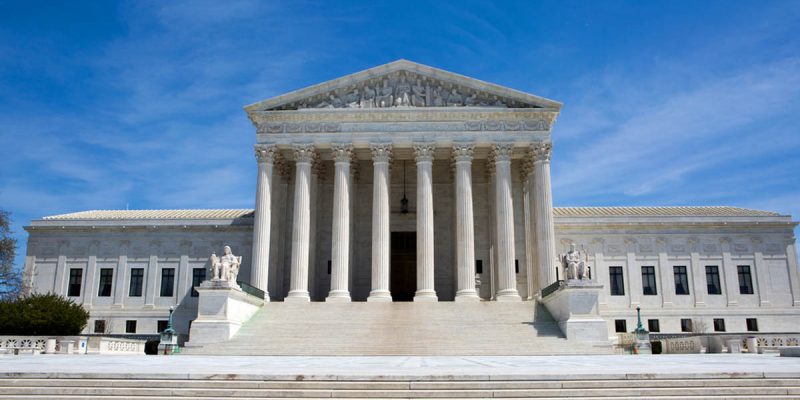 Our readers might not remember the case of Friedrichs v. California Teachers Association, and for good reason. When Friedrichs came before the United States Supreme Court to be decided, Justice Antonin Scalia had died and SCOTUS at the time had only eight Justices, split evenly among the conservatives and leftists. Accordingly, the case produced a 4-4 deadlock and the Ninth Circuit ruling in the case stood.

At issue in the case was whether Abood v. Detroit Board of Education should be overruled, with public-sector “agency shop” arrangements invalidated under the First Amendment, and whether it violates the First Amendment to require that public employees affirmatively object to subsidizing nonchargeable speech by public-sector unions, rather than requiring employees to consent affirmatively to subsidizing such speech. Specifically, the case concerned public sector collective bargaining by the California Teachers Association, an affiliate of the National Education Association.[1]

Justice Antonin Scalia died shortly after the case was argued in front of the Supreme Court, leaving only eight members to decide the case. In the end, the result was a non-precedential per curiam opinion affirming the lower-court decision by an equally-divided Supreme Court.[2] On June 28, 2016, the rehearing petition submitted by the Center for Individual Rights was denied, letting the Ninth Circuit’s decision stand as its final judgment.[3]

And what was that ruling? That it wasn’t a violation of individual First Amendment rights for a public employee union to collect dues from employees who have limited or even no choice but to pay them, as in the case of California school teachers like Barbara Friedrichs, and then spend the funds from those dues on political causes the employees might disagree with without their consent. A 4-4 SCOTUS vote meant this injustice would continue.

We mention Friedrichs because the same issue SCOTUS couldn’t decide with Scalia gone last year is coming up again, this time with Neil Gorsuch on the court to replace him. SCOTUS granted certiorari to a new case – Janus v. American Federation of State, County and Municipal Employees, Council 31 – yesterday.

In Janus v. American Federation of State, County, and Municipal Employees, the Supreme Court will look to determine the constitutionality of a 1977 high court ruling — Abood v. Detroit Board of Education — that said public-sector employees who do not belong to a union can still be forced to pay a fee that covers the union’s costs in negotiating the contract that applies to all employees.

The Supreme Court looked poised to overturn the Abood decision in Friedrichs v. California Teachers Association in 2016, but Justice Antonin Scalia’s death yielded a 4-4 split from the eight remaining justices. Since Justice Neil Gorsuch replaced Scalia, the nine justices’ decision to take the case suggests they could be looking to reverse the earlier precedent yet again.

The court’s announcement Thursday morning that it was taking the case is potentially momentous for public-sector unions and their members.

The case could rewrite federal labor law, severely limiting unions’ ability to automatically demand dues from those members. That would be a serious financial blow as many unions depend on those dues from unwilling members.

“With the Supreme Court agreeing to hear the Janus case, we are now one step closer to freeing over 5 million public sector teachers, police officers, firefighters, and other employees from the injustice of being forced to subsidize a union as a condition of working for their own government,” said Mark Mix, president of the National Right to Work Legal Defense Foundation, which is defending the plaintiff in the case.

The case specifically asks whether Mark Janus, an Illinois state employee, can be forced to pay a so-called “security fee” to the union as a condition of employment. Such fees are common provision in public-sector union contracts. Janus argues the fee violates his First Amendment rights because he doesn’t support the union and doesn’t wish to subsidize its activities.

At PowerLine, John Hinderaker notes that the public employee union folks, who can do enough math to realize how Janus is likely going to go at a SCOTUS with Gorsuch as the deciding vote, are petrified – and howling.

Although it was expected, unions have reacted hysterically to the Supreme Court’s granting of cert in Janus. The country’s four largest public sector unions–AFSCME, the American Federation of Teachers, the National Education Association, and SEIU–issued a joint press release. It is over the top:

The Janus case is a blatantly political and well-funded plot to use the highest court in the land to further rig the economic rules against everyday working people. The billionaire CEOs and corporate interests behind this case, and the politicians who do their bidding, have teamed up to deliver yet another attack on working people by striking at the freedom to come together in strong unions.

There is much more in the same vein. For example, the President of AFSCME writes:

This case is yet another example of corporate interests using their power and influence to launch a political attack on working people and rig the rules of the economy in their own favor. … The merits of the case, and 40 years of Supreme Court precedent and sound law, are on our side. We look forward to the Supreme Court honoring its earlier rulings.

Leftists are selectively enthusiastic about stare decisis–it is wonderful when they are trying to avoid reversal of the ill-advised Abood, not so wonderful when they are arguing for a brand-new constitutional right to, for example, gay marriage. The last thing the Democrats want is for public employees to be liberated to support the causes and politicians they believe in, rather than the ones the corrupt union selects.

Minnesota, where I live, is one of a number of states where public sector unions, especially teachers’ unions, are by far the most powerful political force. Conservatives who rely on voluntary contributions cannot begin to match the enormous revenues the teachers’ unions extract by force from people who are legally compelled to pay them. If the Supreme Court sides with the Janus plaintiffs, the political landscape in such states will be transformed.

The unions believe such a result is highly probable, which accounts for their hysteria. Our Never Trump friends should acknowledge that if Hillary Clinton had won the election, she would have appointed a justice to succeed Antonin Scalia who would have voted to keep public employees in a state of involuntary servitude to the unions, and the Democratic Party, forever.

That last bit is crucial. The Democrats can’t compete with the Republicans with respect to political fundraising if they don’t have the ability to simply command union dollars, and the political game will change momentously if the members of those unions are able to shut down their dues going to partisan politics. Certainly most public employees agree with a Democrat agenda, but there are a third, or more, who don’t. And if they’re able to shut down political spending of their dues it’s going to disrupt the Democrats’ funding model significantly – or if they’re able to opt out of having to pay the unions entirely, it’ll be even worse for that party.

The process by which one party has to actively convince people to write checks and the other party simply holds open a bag for unions to dump them in has been toxically corrupt ever since John F. Kennedy signed off on federal employees being unionized in the early 1960’s. Enough is enough. We could be seeing the beginning of its end when the Janus case is decided, and states like Minnesota, Illinois, Ohio, Wisconsin, Michigan, Pennsylvania and Iowa – and even others like New Jersey, Washington, Oregon, Connecticut and Maryland – could well move from various shades of blue or purple to a significantly more reddish political tone without those massive public-union cash funnels.

And for this, we can thank Donald Trump and his appointment of Neil Gorsuch to SCOTUS. The Janus case would have been hopeless had Hillary Clinton won last year.

Interested in more national news? We've got you covered! See More National News
Previous Article The Jones Act Was Waived For Puerto Rico, But That Won’t Help Anybody
Next Article Tom Price Out At HHS, With Rumors Jindal Could Get The Job