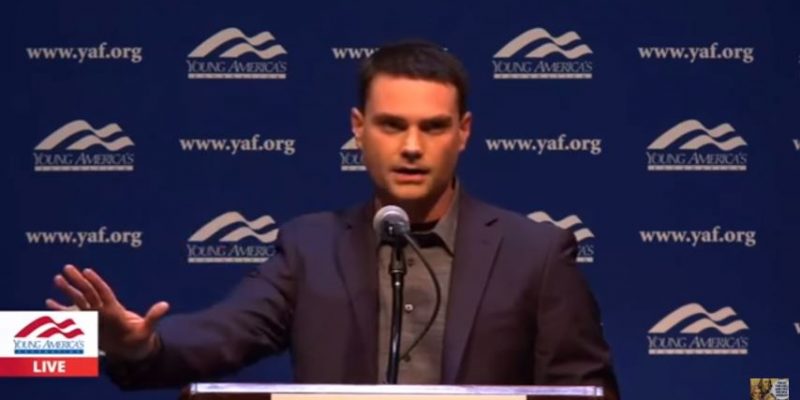 Last night was a substantial victory for free speech and reasoned intellectual debate, as conservative pundit and author Ben Shapiro gave a speech on campus at the University of California in Berkeley that can only be described as a rousing success.

The above statement is not overwrought, as our readers might be tempted to assume. Someone giving a mere speech, however powerful or well-articulated it may have been, should not constitute a substantial victory in a free society – it usually is, and should be, more of a “dog bites man” moment.

But not at Berkeley, and not in 2017. That campus and that town have been Ground Zero for the violent, anti-civil Left – which has responded with fire, fists, mace and brickbats at the suggestion speakers like Milo Yiannopoulos or Ann Coulter might be permitted to address a crowd there. We’ve all seen video and still images of the chaos and wondered where on earth the police were while over and over again the violence erupted. The answer has been that the political leadership of that city has refused to allow the police to maintain order and has, in fact, suborned the violence from groups like Antifa.

Shapiro’s speech, a reprise of an appearance on that campus from just 18 months ago at which there was no violence or rioting, was a flashpoint for another donnybrook in the streets. Businesses closed their doors and boarded up their windows in advance of what was expected to be a riot. The university essentially prevented a sold-out hall from being filled out of concern that it would become the scene of a melee. Some $600,000 was reportedly spent by the city and the university on security for the event.

And outside the hall, there was such violence. Nine arrests were made, including three for carrying weapons outside the hall. One of the arrestees was also charged with battery on a police officer. There was also a report of a stabbing, which the police have refuted.

Still, though it might have taken a ring of police in riot gear, Shapiro was not de-platformed. And inside the hall he demonstrated why the leftist thugs want to de-platform him, because he offered reason and logic and devastated the brutal stupidity of the social justice and identity politics tropes carried about by the Hard Left. Here’s his core speech, all 27 minutes of it…

Following that, Shapiro answered questions for nearly an hour. This might have been the most interesting moment in that time – it came when a young liberal from the mostly-Republican crowd challenged him on the question of abortion and specifically why the pro-life movement would assert the humanity of a first-trimester fetus. It’s a little hard not to be suspicious of the questioner, who comes off as the type of guy who might be pro-choice as a means of gaining license to make a sexual conquest of every target of opportunity in sight without having to shoulder the burden of responsibility should one of his trophies conceive a child in the bargain. Shapiro doesn’t address that suspicion, but he does wipe the floor with the argument about when life, and the “moral status” of the fetus, should take hold…

There was much more, but mostly we were impressed with the hopeful development that Shapiro, who while representing a very mainstream strain of conservative thought is one of the more combative and forceful articulators of it, was able to deliver that tour de force despite Antifa’s efforts to shut him down. If this is a sign that perhaps the Left’s de-platformers have hit their high-water mark and are now draining out of fervor, then last night was a significant victory indeed.

Interested in more national news? We've got you covered! See More National News
Previous Article Is The Vote of No Confidence In Joe Straus Really Useful Or A Distraction?
Next Article The Contrast between Knives and Guns in Texas: A Dull Distinction