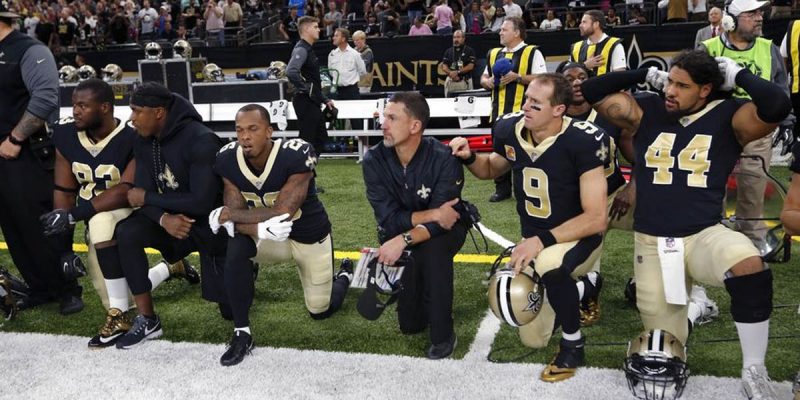 Did you hear about the “triangulation of misunderstanding” in the Superdome on Sunday? It was the perfect storm of social-justice virtue-signaling, fan irritation and poorly-thought-out planning which led to the Saints being booed during a moment of silence to honor fallen NOPD officer Marcus McNeil, who was shot to death last week.

The Saints’ head coach Sean Payton, who has demonstrated enormous skill at making dumb statements in his own right, tried to explain…

“You had a triangular effect of misunderstanding, ” Payton explained.

Just before the national anthem was played, the team took a knee together… however, the Superdome PA announcer then called for the moment of silence.

“Number one: The players were going to kneel and stand for the anthem.  That’s understood, all right. Then number two: There was a moment of silence for the slain officer, and quickly then everyone realized, ‘Hey let’s have a moment of silence.’ And so, look, I don’t think it was anything more than that,” Payton told reporters.

Some fans in the Dome, however were upset with the team on a knee during the tribute to McNeil, so they booed the Saints during the moment of silence.

The Saints management says what’s sad about this whole misunderstanding about the tribute is that the Saints players asked for that moment of silence.  They say the players wanted to show love and respect for McNeil and his family.

There is a lot of screaming out there to the effect that the Saints were kneeling out of hostility to the dead policeman, and that’s not what they were trying to do, obviously.

That said, how did these guys expect all this to be received?

The fans don’t like the kneeling. The kneeling was invented as a protest against the police. When you kneel during a moment of silence for a freshly-killed cop in Marcus McNeil who met his end by the hand of a career criminal – y’know, somebody a whole lot like Mike Brown and Alton Sterling who are the martyrs of the Black Lives Matter movement these stupid protests are furthering – don’t be surprised when the fans see it as something of a touchdown dance against the police.

There’s a very easy answer to all this: stop kneeling.

Maybe the Saints came about their decisions to kneel in protest honestly, but guess what? Those decisions have gone over like lead balloons. The best anyone has said about them is a vague defense of the First Amendment, which frankly doesn’t apply to political speech unrelated to job performance given by employees on company time. Nobody thinks any of this is good for business in the NFL.

It’s pretty clear the Saints suck at politics, though at one time the team’s owner Tom Benson wasn’t bad at the game. Benson took Louisiana’s taxpayers for some $150 million in freebies, which was quality work. Since then, though, it’s been Payton running his mouth about gun control in one of the most pro-Second Amendment states in the union and a host of grossly overpaid players like Mark Ingram (whose father spent a lengthy amount of time in prison) and Kenny Vaccaro kneeling while in London.

All of it is terrible. The fans are exhausted with the kneeling. And nobody seems interested in trying to figure out if you’re kneeling to honor Marcus McNeil or if you’re kneeling to spite him. They just assume bad will on your part and start booing, because you’ve broken their trust by disrespecting the national anthem.

At some point someone needs to put it to these people – do you want to be football players, or politicians? Because trying to do both didn’t work for Colin Kaepernick and it sure isn’t working for you.