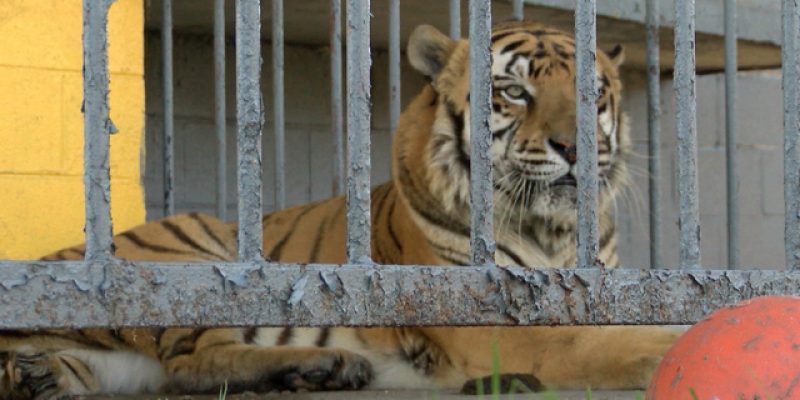 Word came through late Monday evening that the Tony, the Bengal tiger that was a fixture at Tiger Truck Stop in Iberville Parish for over 17 years, had been euthanized due to health problems.  The news originated from a statement made by Ted Baldwin, purportedly on behalf of owner Michael Sandlin, the Advocate reported:

Tony was put down Monday evening, after his health declined due to kidney failure, the statement says. A necropsy will be done by veterinarians to learn more about Tony’s illness.

Tony was six months of age when he came to live at the Tiger Truck Stop in January 2001, according to the statement.

“The decision was made to end his suffering at his facility,” the statement says, describing “a sad day for his owner Michael Sandlin and the entire (Tiger Truck Stop) family.”

Sandlin could not be reached Monday night for comment. Back in April, he denied that Tony was suffering and said the tiger was seen regularly by a veterinarian, limped from arthritis and only had loose stools after getting anti-worm medicine.

“He is not sick. He’s simply an old man with some arthritis,” Sandlin had said.

Tony was old for a tiger, which typically lives 14 to 18 years in captivity, Dr. David Baker, a veterinarian with the LSU School of Veterinary Medicine, said at that time.

Despite repeated attempts by animal rights groups to have Tony removed from the roadside attraction over the years (including some that remained ongoing), Tony remained there until his death, which by all appearances was not usual or untimely for a tiger in captivity.  However, legitimate questions had been raised about the quality of his enclosure and the propriety of using a wild animal in such a way.  Fair-minded people fell down on both sides of the debate.

The watershed moment for Tony’s legal status came in 2014 when legislation was passed passing a specific exemption for Tony.

Regardless, because Tony’s captivity operated under a specific legislative exemption, it would not appear likely that Sandlin will be able to either obtain or keep another tiger legally. Present law in Louisiana only allows large exotic cats to be kept by “colleges, sanctuaries, zoos, wildlife research centers and scientific organizations.”

Nevertheless, an existing petition on “SAVETONY.com” is prefaced by the tagline: “They are trying to make sure our exhibit is closed after Tony dies! NEW PETITION! IMPORTANT! PLEASE SIGN NOW!!” The fight may well continue.

Interested in more news from Louisiana? We've got you covered! See More Louisiana News
Previous Article Who’s Up For Watching An LSU-Auburn Replay?
Next Article The Saints’ Failed Tribute To Marcus McNeil Ought To Be The Last Of The Kneeling