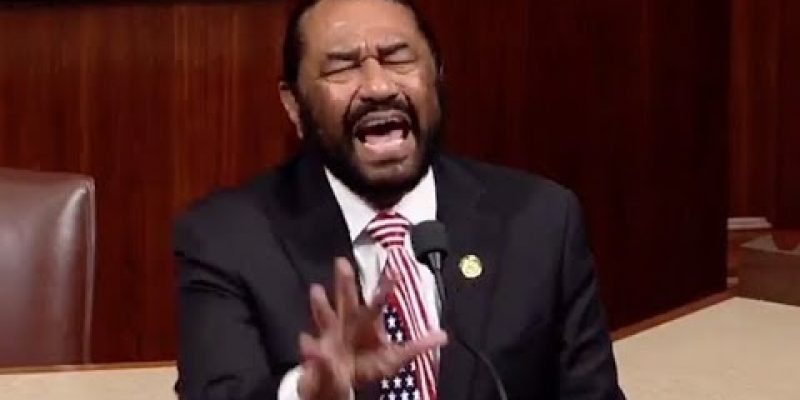 But it’s not odd at all. As Shakespeare once said, the guilty mind is full of scorpions, and you can bet Green, who isn’t one of the brighter bulbs in Congress, has been wringing his hands the past few weeks waiting for the juicy details of his sordid affair to come out.

Texas Democratic Rep. Al Green had sex with a staffer who he said was a drug addict and then sued her when she threatened to go public with claims she suffered a hostile work environment, saying he “will not be extorted or blackmailed.”

Lucinda Daniels, his onetime district director, claimed she suffered a hostile work environment, claimed sexual harassment and demanded $1.8 million. Green sued her, saying she was using their sexual relationship to shake him down at the behest of other unnamed conspirators.
“Daniels has threatened to go public with her complaints if the Congressman does not per her money. Green has done nothing wrong and refuses to pay ‘hush money’ just for political expediency. Green will not be extorted or blackmailed by Daniels. He will not be the victim of a shakedown by Daniels and her agents. Green demands vindication of his actions and now sues Daniels for declaratory judgment relief relating to her workplace allegations and her quest for money,” documents Green filed in federal court in 2008 say.

Daniels also unknowingly dialed the congressman while she was allegedly buying cocaine. Green submitted the voicemail, now sealed, as evidence in the case.

In the recording, “Daniels is heard ‘snorting’ the cocaine immediately before questioning whether it was ‘cut’ with some other substance and being assured that it was “straight off the ki[lo] … Daniels asks for the purchase price of the drugs, which she calls her ‘Tuesday special’ price. In response, the drug dealer sells her the drugs for $40.”

Green said Daniels “act[ed] sluggish at work as through under the influence of drugs” and “slurr[ed] her speech as if under drug influence.” He claims she fell “asleep on the phone in the middle of telephone conversations with staff and the Congresswoman” and had “a general appearance of incoherence at times due to apparent drug use.”

Green confronted Daniels on the drug use and suggested she seek treatment. Not long afterward, Daniels “claims the Congressman retaliated against her in the workplace because of her gender and because she refused additional romantic requests.” Green rejected her claims as false.

So you have Green sleeping with a cocaine-loving staffer who then claims that Green discriminated against her after she refused to have more sex with him. Green’s camp released this statement even though no one was even asking for it yet.

In the present climate, we wish to jointly quiet any curious minds about our former and present relationship with one another. We are friends, and have long been friends. At an unfortunate time in our lives, when both of our feelings were hurt, we hastily made allegations and charges against one another that have been absolutely resolved. This matter has been resolved without payment of any money or transfer of any consideration of any kind by either of us to the other. As friends, we have both agreed that we see no need to make further statements regarding this absolutely resolved matter.

I don’t know about you, but I’ve never been so mad at a friend that I just had to file a lawsuit against them alleging sexual assault. Even if the lawsuit was withdrawn, you have to wonder what those backroom conversations between Green and Daniels were like.

It’s not like Green is even denying that he had sex with the staffer, or that he was aware she was a fan of cocaine. The statement really poses more questions than it answers, and this is probably going to backfire on ole’ Al. I really doubt the fact that Green volunteered this information will make any difference to the lynch mobs on Twitter from calling him a piece of garbage and demanding his resignation.

Green, by the way, is at the forefront of the cabal of politicians trying to impeach Trump.  Seems like it isn’t the President who most urgently needs impeachment in Washington.

Interested in more news from Texas? We've got you covered! See More Texas News
Previous Article CROUERE: Who’s The Ringside Politics Turkey Of The Year? Who Else But Mitch Landrieu?
Next Article The John Bel-For-President Pre-Campaign Continues Apace