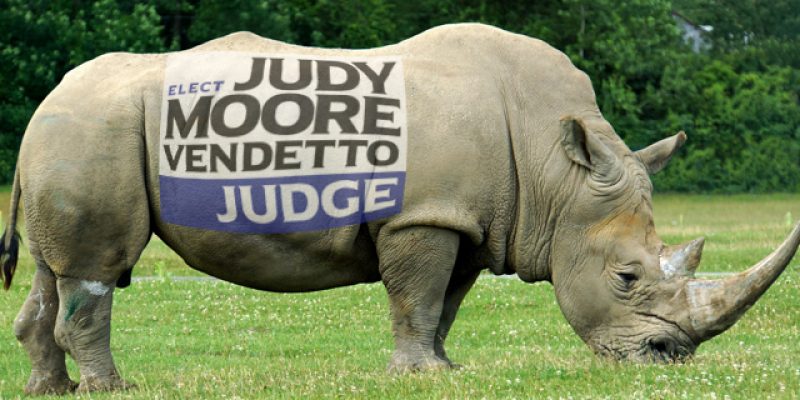 There’s a race brewing for an open Baton Rouge City Court Judge spot that shows the importance of paying attention to down ballot races. The race pits prosecutor and political newcomer Chris Hester against Judy Moore Vendetto, whose main qualification she touts for the office appears to be that she is the sister of East Baton Rouge District Attorney HIllar Moore.

Hester narrowly edged out Whitney Higginbotham Greene for the second runoff spot behind Vendetto, who prominently featured her Democrat brother in her campaign tv ad (in which she does not actually say a word).

Both are registered Republicans. More on that later.

Vendetto, 48, has been a clerk to Judge Mike Erwin who you may remember we have written about at length. For the last 21 years she was basically his assistant. She is, in fact, a lawyer–like her brother she graduated from Southern Law. However, in her campaign she hasn’t touted her experience taking depositions, writing wills, arguing or even trying cases, instead, she focuses on “courtroom experience” and a claim to 21 years of experience as a licensed attorney. But, she’s never practiced law as a courtroom lawyer. She’s a law clerk.

Compared to Vendetto, Hester, 35, is basically a boy scout. He’s the son of a retired Judge with just shy of a decade’s experience practicing law. But he’s practiced law, which is nice, with some civil experience before 8 years of experience at the East Baton Rouge Parish District Attorney’s office (serving under Vendetto’s brother), including a stint in charge of the violent crimes unit. He touts his experience as a civil attorney before joining the DA’s office, and his 8 years of crime fighting and putting the bad guys behind bars.

As you can see, there’s some pretty big differences in these candidates, and neither are perfect. But the momentum from Hester is building.

The East Baton Rouge Parish Republican Party on Friday chose to solely endorse Hester, which was a surprise since Vendetto (who says she is a Republican) led in the primary and spent some serious money in the primary. Upon further investigation, including watching this Chamber of Commerce Forum between the two from last week, there is a pretty stark contrast between the two.

The contrast is not just about Hester’s obvious qualifications for the job and Vendetto’s lack thereof. It is simply that Hester is an actual Republican and Judy Vendetto appears to be something else.

Vendetto’s campaign finance report and her social media tell the real story. She’s a Democrat. After she led the general (by turning out her brother’s Democrat voters) she admitted as much. Here’s a screenshot from her Facebook Page: 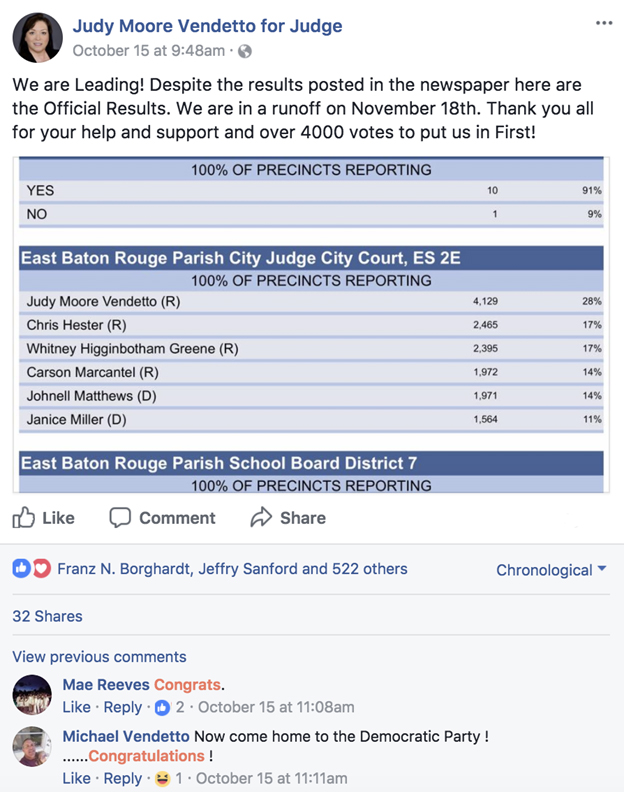 As you can see someone “liked” that “come home to the Democratic Party!” comment. That person? None other than Judy Vendetto herself.

Now this seems innocuous enough, a simple joke. But as you dig deeper, Vendetto’s connections to Democrats are not mere coincidence. Her max contributions come from Democratic boosters. Her pollster and advocacy services are provided (for a fee) by Chism Strategies, whose stated mission is “to help elect Democrats and advance progressive causes.” I am not making this up.

And, perhaps most striking, Vendetto’s largest expenditures to date have been to Ourso Beychok, the Democrat firm that brought us none other than Gumbo PAC, the thoroughly corrupt Baton Rouge Council on Aging tax and John Bel Edwards as our Governor. Ourso Beychok very clearly have a significant role Vendetto’s campaign.

Michael Beychok, a well known Democratic operative, has his own sordid history, as he recently claimed that BRPD is a “club that protects themselves before they protect the citizens.” 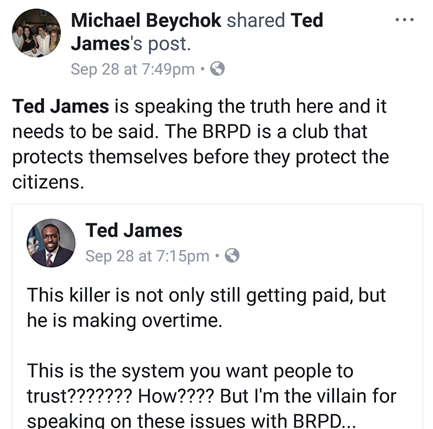 All of this is documented evidence that Judy Moore Vendetto is a running a Democrat campaign while telling the conservative voters in this district that she is a Republican. And that’s why the business community and Baton Rouge Republican groups (and their donors) are coalescing around Chris Hester.

On November 18 the voters of the largely conservative subdistrict will choose a replacement for Judge Suzanne Ponder, who retired June 30 before her term ended in 2018. The winner of the race will have to run again, very soon. And because both candidates are fairly young, we can expect they will both be trying to move on to bigger and better judgeships.

When the Republican Party took over the Louisiana legislature and other bodies it was a necessity that they onboard some icky characters like John Alario and his like, who were clearly Republicans of convenience, and not of character. As offices, like Judgeships, begin to turn over, conservative voters need to be aware that there are politicians trying to fool them into believing they are actual Republicans when they are anything but.

The conservative choice in this race is clear, and that’s Chris Hester. He may not be the oldest guy on the block–in fact he’s downright young at 35–but he has actual experience, ya know, trying cases and stuff. He’s represented clients and argued before Judges–which she hasn’t done since mock trial class at Southern Law.

And, importantly: Chris Hester is not a wolf in sheep’s clothing. Judy Moore Vendetto has shown herself to be just that.