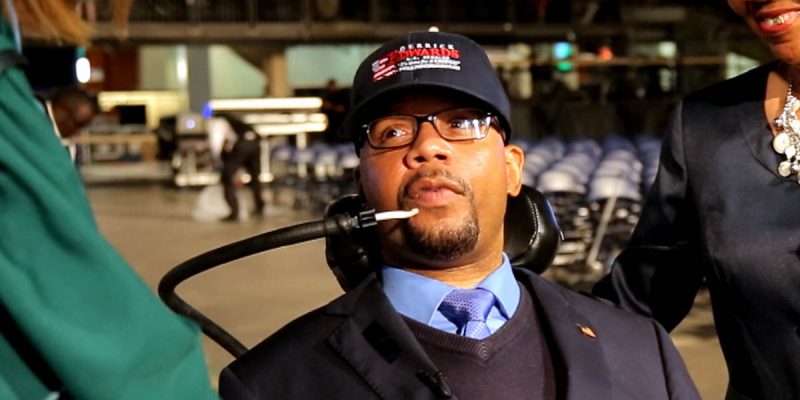 We delved into this earlier, when Edwards was asking for campaign fines to be waived by the Louisiana Board of Ethics arising out of his failure to timely report his campaign’s contributions and expenditures during the primary in the State Treasurer’s race. That was when Edwards was running a sad-sack campaign without the endorsement of the Louisiana Democrat Party and the primary source of his campaign’s finances was a $6,000 loan from a family member.

Here’s what we said then…

We hope the ethics board does waive the fine, because after all he did file the report and there’s no evidence he was trying to hide anything. Edwards’ campaign has suffered from the late report and the fine; after all, it was the reason given for his party refusing to endorse him.

And the Democrats still haven’t endorsed Edwards, which is exceptionally peculiar to us – and let’s face it, downright shameful.

Edwards shouldn’t even have to appeal the fine. It’s only $2100. He ought to have the money to just pay the stupid fine.

Looking through his campaign reports, we only find one max donation in the entire bunch – that was a $2500 check from New Orleans Democrat moneybag John Cummings. So yes – Edwards’ campaign performance suggests a certain lack of vigor which indicates that if Louisiana were to make him treasurer it would be a real concern whether he could get a requisite amount of work done.

But on the other hand, one really can’t say enough negative things about the Louisiana Democrat Party and how they’ve handled Edwards’ campaign.

They didn’t find another candidate. He’s the one Democrat who actually offered to bear their standard. That should count for something, but obviously it doesn’t.

They can’t raise this guy $50,000? That’s 20 phone calls to plaintiff lawyers like Cummings, who are all over the state and give money to hopeless Democrat candidates all the time.

That was on Oct. 20, which was six days after the primary and Edwards had done scant little to timely file his campaign reports.

Today it’s Nov. 13, and he’s filed precisely one report since then. In fact, he’s filed only one campaign finance report since Oct. 12. And the one he filed on Wednesday isn’t up to date; it covers activity only up to Oct. 29.

In that report we see that the union money has started coming in for Edwards. He’s got $2,000 checks from Local Union No. 60 in Metairie dated Oct. 4 and Oct. 27 – that’s the Plumbers and Steamfitters union – and he has another $1,000 check from the International Brotherhood of Electrical Workers on Oct. 26. He also has a $500 check from Foster Campbell listed in that report, which shows him taking in some $14,000 and spending all but a few hundred of it on radio and TV ads. There is no reporting on campaign staff in any of his reports, and the only consulting fees of any kind it looks like Edwards has paid went to a Mandeville company called Fleurish Media Productions – that was $1,700 paid a long time ago.

In other words, we’re completely in the dark as to what this campaign is doing.

Compare that to John Schroder’s campaign, which filed five reports last week – they’re following the campaign protocol to provide 48-hour reports when they take in campaign donations, and have been timely in reporting all through this campaign.

This stuff is important, because while it might have been excusable for Edwards not to have filed his reports timely before – he’s a quadriplegic, after all, and he has to use voice recognition software to “write” documents, plus without any money for campaign staff he’d have to do all this stuff himself – he doesn’t really have that excuse now. The Louisiana Democrat Party has endorsed Edwards, and so now he’s their problem and it’s their responsibility to make sure their candidate is following the campaign finance laws.

Is Edwards taking money? If he is, then he’s obligated to file those 48-hour reports. He isn’t doing it. What that amounts to, we are entitled to conclude, is an attempt to hide from the public who’s behind his campaign.

And that lack of transparency, which again can’t be passed off by Edwards as a function of his disability because he’s got people helping him now, matters because he’s running for State Treasurer. The State Treasurer’s job, in very large part, is to provide transparency to the public about matters financial. If Derrick Edwards can’t do that in a campaign setting, with requirements which are about as basic as they can be, what chance is there he’ll perform satisfactorily when his job will be to provide the public information about the state’s finances?

Yes, there is a large staff who works for the state treasurer, and yes, that staff can make sure the requirements are followed. So it’s OK to have somebody at the top of that pyramid who’s shown himself unable or unwilling to do what the staff does, or to properly supervise them?

It’s disqualifying. And we say this with all sympathy to Edwards’ condition. If you’re going to run for a statewide office you have to be able to fulfill the campaign finance reporting requirements. Period. If you can’t do that you’re not in a condition to run for the job. That would be true if you’re a candidate for a parish council seat somewhere, but it’s unquestionable if you want to be State Treasurer.

And this is a blight on the escutcheon of Karen Carter Peterson and the Louisiana Democrat Party, especially. The point of their endorsement had to be to shape the Edwards campaign up into something that wasn’t a joke, and they’ve completely failed in that regard. If Edwards couldn’t at least file the finance reports then maybe they were right not to endorse him from the beginning. There are no excuses now.

In the meantime, there is a formula by which Edwards still might be able to win this race. They’re now projecting, based on the early vote totals, that Orleans Parish’s Nov. 18 turnout will amount to 89,000 votes – a reflection of the mayoral runoff. Meanwhile the state’s overall turnout is being modeled at 12 percent – a total of around 350,000 votes in total. So if Edwards can get 70 percent of the vote in Orleans and 40 percent of the vote in the rest of the state, he can win.

We’re going to say that’s unlikely, because Edwards got about 79,000 of 327,000 votes outside of Orleans Parish in the primary, or 24 percent. To get to 40 would mean a much different turnout model, and we just don’t see it happening. We also don’t see Edwards getting any Republican votes, or pulling from Angele Davis’ or Neil Riser’s support base.

Still, it’s not over. And if the rest of the state doesn’t turn out on Saturday that formula could be a winning one which puts Edwards in as the most unlikely successful statewide candidate in modern times.

Maybe then we’ll get to see who’s been giving him money, and what he’s spending it on. Maybe.

Interested in more national news? We've got you covered! See More National News
Previous Article After Weighing What We Know About The Roy Moore Case, Here’s Where I Come Down…
Next Article John Bel Edwards’ Big Announcement Today Is He’s Giving Away $120 Million In Corporate Welfare (UPDATED: $44 Million)