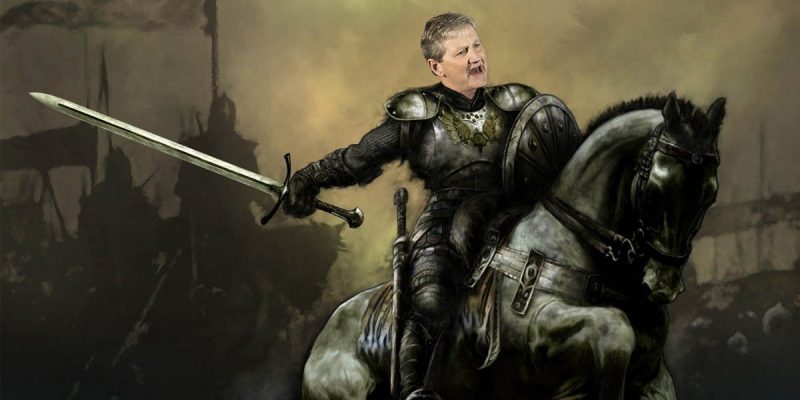 In a missive which made us wonder if his staff saw our post this morning on Gov. John Bel Edwards’ use of Louisiana’s recently-passed criminal justice/prison reform package as a launching pad for his apparent pre-campaign for president in 2020, Sen. John Kennedy took the opportunity to drag Edwards through the swamp this afternoon.

The release is a fairly thorough castigation of Edwards’ record on prison reform – but specifically in a respect we predicted. Here’s what we said this morning…

And as we’ve discussed, the criminal justice reform package Edwards is attempting to ride on isn’t a particular political thoroughbred. It’s not that Louisiana didn’t need to do something about its gargantuan prison population, and it’s not that there aren’t lots of Republicans willing to break bread with him on that issue – the package that passed the legislature was, after all, a bipartisan one. The problem is nobody is going to share the blame with Edwards when the parade of Smokey Whites begins in earnest, and the easiest thing for the governor’s critics to do will be not to criticize the reform package passed in the legislature but rather his administration for its suspect implementation of it. After all, in the case of White Edwards’ administration cut loose an unquestioned career criminal under the auspice that he was a “nonviolent” offender, and within a week of his release White was brandishing an illegal gun on a construction crew in an armed robbery. There will be lots more Smokey Whites and they will all be on Edwards’ head. Prison reform might well be a salutary public policy advance; what it isn’t is a big seller as a political prize.

Particularly given that the complaint against Edwards on prison reform implementation is a specific one of long standing – successful prison reform is about breaking criminals out of the behavioral cycle which made them criminals in the first place by giving them other options, etc., whereas Edwards’ strategy has always been about driving a number of bodies released from the jails so Louisiana wouldn’t be the largest incarcerator in the country anymore. That critique becomes granite the minute the next Smokey White goes and kills someone, and Edwards becomes Michael Dukakis on steroids. Odds are he doesn’t get invited to discuss his great success at the next Pew Charitable Trust event then.

Short version: Edwards was always going to get beaten up not because prison reform was passed on his watch, which would entail some Republicans in the legislature getting hit with collateral damage, but because of his implementation of it.

And then came Kennedy’s release, which fleshed out that prediction in technicolor…

WASHINGTON, D.C. – U.S. Sen. John Kennedy (R-La.) voiced concerns today about the Louisiana Justice Reinvestment Act.  Those concerns include the Louisiana Department of Public Safety and Correction’s ability to competently administer it.  Under the act, Louisiana began releasing inmates in November in order to lower populations at prisons across the state.  Included in the release were career criminals who have already committed additional crimes and are back in jail.

The Louisiana Justice Reinvestment Act calls for DOC to review Louisiana’s prison population for early release opportunities in order to cut costs.  The savings will allow Louisiana officials to continue their spending sprees. Already, 1,900 inmates have been released with more due to be freed every month.

The releases are happening even though:

There’s even a video…

Kennedy’s made the best case yet for the obvious attack on Edwards as a latter-day Michael Dukakis, and this is before there have been any real Willie Hortons to exploit against him. Everybody knows those are coming; after all, Louisiana has all these people in prison for a reason, and with some 2,000 or more already let out of jail if only two percent of them turn out to be dangerous you’re looking at 20 violent criminals plying their trade and preying on our citizens.

Politically, we’re very comfortable in saying prison reform will be the gift that keeps on giving to Edwards’ critics. It seems Kennedy and his people agree.

Interested in more news from Louisiana? We've got you covered! See More Louisiana News
Previous Article Overregulation Strangles Baton Rouge Microbrewery Before It Could Even Open
Next Article Mitch Landrieu Spent Over $16,000 In Taxpayer Funds For His Paris Trip