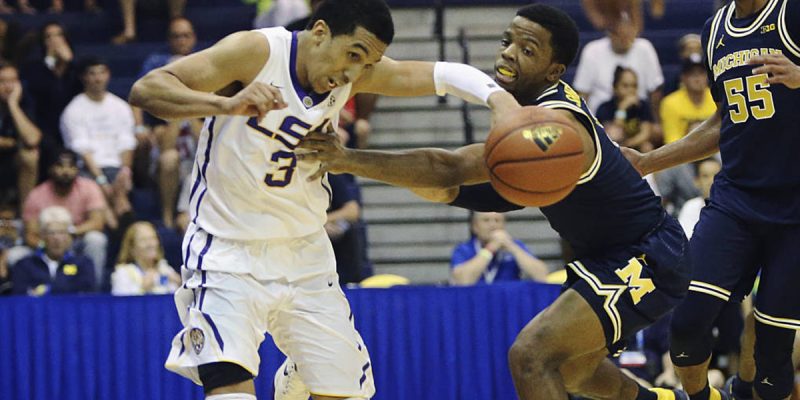 UPDATE: In case you missed the game, here’s the whole thing…

Oh, and then there’s the fact LSU had the No. 1 AND No. 2 plays in Sportscenter’s Top 10 this morning…

ORIGINAL: In case the game ran too late for our readers to watch it to the end, Will Wade and the LSU basketball Tigers managed to knock off Michigan in a thrilling 77-75 contest at the Maui Jim Maui Invitational tournament last night. It was perhaps the best basketball game LSU has played in a decade, and while any proclamations about LSU hoops three games into Wade’s tenure as the school’s basketball coach are premature it paid off some of the excitement and chatter about the coach and the future of the program.

So with that, here are three thoughts on what happened last night.

What A Difference A Year, And A Coach, Can Make

The typical pattern for last year’s 10-21 LSU team which finished a miserable 2-16 in the SEC and lost, at one point, 15 games in a row was that for a while in most games they’d play fairly well and hang with their opponent – and then the opposition would go on a massive run at some point in the game which would never be answered, at which point garbage time would ensue.

That pattern seemed to hold into the second half of the Michigan game. LSU took an early lead mostly of between two and seven points and didn’t really relinquish it for the first three quarters of the game, though Michigan did manage to tie it up a couple of times – and then the Wolverines went on a run which erased a seven-point LSU advantage and when it was over Michigan was ahead by nine, 68-59, with 8:38 left in the game

But instead of patting each other on the back for having hung with a quality opponent for so long like last year’s Tigers would have done before packing things in and ultimately losing by 15 or 20, this crew fought back with a vengeance.  Even despite losing Brandon Sampson with five fouls with a little more than five minutes left in the game – Sampson had 10 points and, amazingly enough, played shutdown defense on Michigan’s leading scorer Duncan Robinson – LSU dominated the last several minutes of the game. Down nine, Tremont Waters – whose 27-point performance in the season opener against Alcorn State was no fluke, as he finished with 21 – drove to the basket for a layup and an and-one free throw to make it a 68-62 score. Then after a defensive stop courtesy of a Skylar Mays blocked shot, Waters drained a three-pointer for a 68-65 score. The teams traded baskets and then Moritz Wagner, Michigan’s 6-9 post player, buried a three for a 73-67 margin with 3:18 left.

At that point LSU really turned on the juice. Wayde Sims made a layup to cut the lead to four. After another defensive stand LSU managed an offensive rebound and then Aaron Epps dropped in a three-pointer to make it a 73-72 game. Then, following a Michigan free throw Waters scored again to tie the game at 74. Waters then hustled his way to a steal and a beautiful no-look, over-the-head pass to Mays for a dunk to make it a 76-74 game with 1:18 left. From there the only offense was a free throw from each team for the final margin. By game’s end it was LSU possessing far more energy than Michigan – something which hadn’t been the case for a very long time.

The Michigan outcome gave credence to virtually everything Wade has been preaching since taking the LSU job. He talked about how winning the last six minutes of a game was paramount. He talked about the importance of conditioning. He’d been fanatical about the willingness to play defense. With the light dying out on the game LSU did everything he’d been preaching, and won.

And if you hadn’t seen LSU play this season before last night you’d wonder who these guys wearing the jerseys of Duop Reath, Epps, Sampson and Sims were, because they sure didn’t look much like the same guys in those jerseys last year.

Time will tell how good Michigan really is, but by appearances LSU shouldn’t have won that game. Michigan is really a pretty good basketball team, one which is very well coached by John Beilein and which has a nice mix of size and athleticism. They’re also a very experienced crew – four of Michigan’s five starters were juniors or seniors. And Michigan had, arguably, the two best players on the court in Wagner, who had 24 points on 9-for-14 shooting, and Charles Matthews, who dropped in 28 on 10-of-17 shooting with eight rebounds. LSU really didn’t have an answer for either all night.

But despite losing those individual matchups LSU won anyway with a combination of Waters’ wizardry and a lot of team play. The Tigers had four guys in double figures (Waters with 21, Epps with 14 on 6-of-7 shooting, Reath with 13 and Sampson with 10), and got hard-nosed efforts from Mays (8 points, five rebounds, three assists, two blocks) and freshman Brandon Rachal (7 points, four rebounds, four assists). What was obvious was that despite this not being the kind of LSU team which will dominate quality opponents with the weight of its talent, the whole is greater than the sum of its parts. That hasn’t been true of LSU’s basketball team since John Brady’s Final Four season 11 years ago.

Tonight at 9:30 central time LSU will have another opportunity to beat a team better than they are in No. 13 Notre Dame. The Fighting Irish, who clobbered Chaminade by 27 points 83-56 after leading by only six early in the second half last night, might not quite be as athletic as Michigan, but they’re tremendously efficient. Wade’s team will have to ramp up their play even more to win that game.

But the Michigan game showed that LSU can overcome weaknesses and win with grit and smart play. It was a notice served to the country – but most importantly, LSU’s own players – that Wade’s system works. The dividends of that should be that this team believes in itself, something which hasn’t been true of LSU hoops for a long time.

Don’t Wait – Get On The Bandwagon Now

This is going to be a really fun season for LSU basketball, because any accomplishments this team manages can be enjoyed for their own merits. They were picked last in the SEC, after all, and though it was clear in the first two games LSU wasn’t going to be the worst team in the conference when you’re picked last you really can’t hold yourself to expectations like winning more than half your games in the conference or going to the NCAA Tournament.

Last night’s effort was good enough that, replicated, could maybe accomplish those things. But we won’t bother burdening this team with expectations of that kind. At this point we can just take each game on its own and enjoy watching a team that plays together, brings a lot of effort, runs good offensive sets, shoots a high percentage and has a lot of fun.

And we can enjoy this team for what it is, whether it can get to a postseason tournament or not, in the knowledge that LSU will be a monster of a program in the future.

That’s not an idle boast, and it’s not just fan exuberance after three games. Objectively this is going to be a nationally relevant basketball program as long as Wade is here. Because next year LSU is bringing back Waters, Sampson, Sims, Mays, Rachal, Darryl Edwards and two freshmen who aren’t in the playing rotation yet in Mayan Kiir and Galen Alexander, plus 6-11 post player Kavell Bigby-Williams becomes eligible after transferring from Oregon, and then comes what’s currently rated as the No. 4 recruiting class in the nation. JeVonte Smart, the Top 30 superstar point guard from Scotlandville, Top 100 forward Darius Days of IMG Academy in Florida and Top 20 post player Naz Reid out of New Jersey will essentially replace Randy Onwuasor (who’s the 10th guy in LSU’s playing rotation at this point), Epps and Reath, respectively, and in each case it’s fair to expect LSU will be trading up.

And to top it off, it’s beginning to look like LSU might finish the recruiting class with a Top 20-caliber player in Emmitt Williams, the 6-7 forward from Orlando who’s been considered a pie-in-the-sky recruit. Williams’ status was thrown up in the air earlier this fall when he was arrested on suspicion of sexual assault, but he’s yet to be charged in the case; we’re told the reason for it is there are text messages from the girl in question to Williams’ phone indicating that the sex between the two was consensual and it’s quite likely he’ll be cleared. LSU backed off Williams just like everyone else did, though at the time the Tigers looked increasingly likely to land him, but Wade and his staff have still kept in touch and the recruiting services seem to think Williams will ultimately sign with LSU in the April signing period. If that happens Wade will have added four highly-rated players (Nos. 19, 21, 30 and 60 in the Rivals 150, Nos. 18, 20, 32 and 61 in the ESPN Top 100, Nos. 21, 24, 36 and 59 in the 247 Sports Top 247) to a pretty good returning basketball roster.

Things are about to get fun in the PMAC. This is going to be a great ride. It’s still early, but last night’s win was a clear indication of which way this thing is going.

Interested in more news from Louisiana? We've got you covered! See More Louisiana News
Previous Article Together Baton Rouge’s Never-Ending Attacks On The Baton Rouge Police Are Troubling
Next Article The Pressure On Kennedy To Back Kyle Duncan Is Increasing