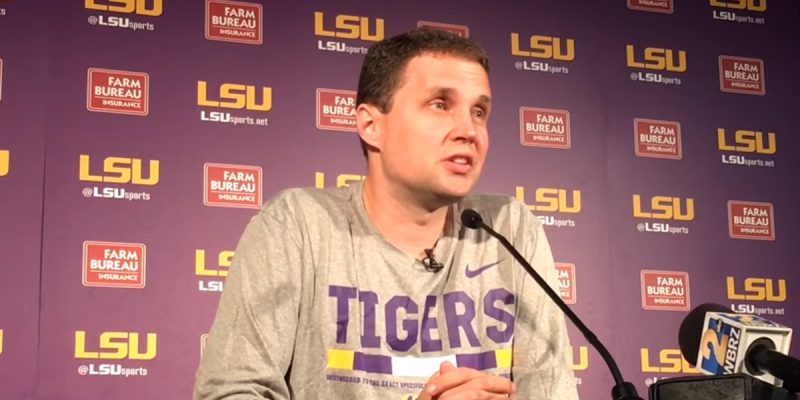 We got a kick out of this when we saw it yesterday, because even with an 84-74 loss at Tulane Tuesday night it’s a source of optimism to see LSU basketball coach Will Wade look so much like a Nick Saban after an unsatisfactory effort.

Wade is known as a stickler for defense. He builds his teams around an aggressive, intense, pressure defense which contests every shot and forces lots of turnovers. But he’s taking over a team which last year was the worst defensive team from a Power 5 conference in some 15 years; that was the primary reason LSU was 10-21 last season and only 2-16 in SEC play. To say that it’s a major rebuilding job and a complete rework of the LSU program in order to make it look like the kind of basketball club that suits Wade’s style might be an understatement.

And in the scrimmage against Tulane in New Orleans on Tuesday, LSU looked a lot more like last year’s team than what is hoped for this year. Letting the Green Wave put up 84 points was alarmingly bad. Shooting 4-for-24 from the three point line was worse. Wade decried lots of those three-pointers as lazy, and ripped his team’s poor offensive execution.

But more interesting was that without naming any names, Wade said he’s grown tired of waiting on his returning players, who are on film from last year as playing terrible defense, to make improvements. He said he’s about to give up on that and play different players.

It’s the kind of statement – Wade is saying this to the reporters, but he’s really talking to his team – that Saban was and is famous for making. Call it smart tough love, if you want.

And to be fair, LSU played the exhibition game against Tulane without three players likely to see a lot of action this year – forwards Aaron Epps, Jeremy Combs and Galen Alexander, who are recovering from foot, ankle and knee injuries, respectively. When those three rejoin the active roster, which is expected to be the case one week from today when Alcorn State comes to town for the season opener, this team should be considerably beefed up from the crew which struggled so badly in New Orleans.

But they have a long way to go to meet the expectations Wade has for them. And as he showed in his post-game press conference, he’s not interested in giving much benefit of the doubt.