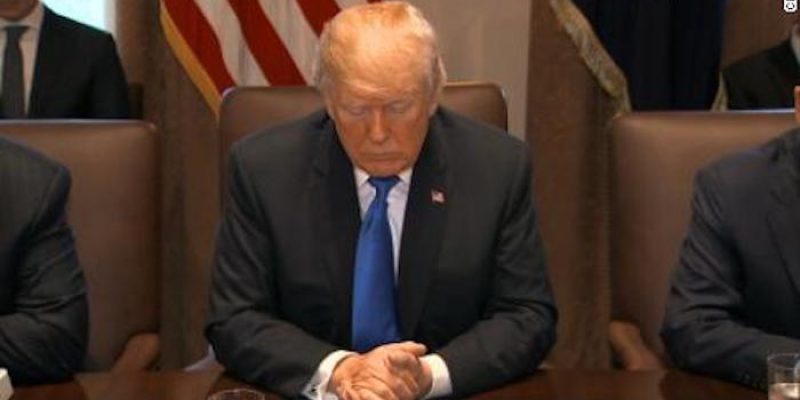 President Trump’s Cabinet meetings begin with prayer. Before Housing and Urban Development Secretary Ben Carson led the prayer to kick off Wednesday’s Cabinet meeting, Trump had a suggestion for the media.

According to reporters in the room, he said: “You can stay if you want because you need it more than we do.”

Our kind Father in Heaven, we’re so thankful for the opportunities and the freedom that you granted us in this country. We thank you for the president and for Cabinet members who are courageous, who are willing to face the winds of controversy in order to provide a better future for those who come behind us. We’re thankful for the unity in Congress that has presented an opportunity for our economy to expand so that we can fight the corrosive debt that has been destroying our future. And we hope that unity will spread even beyond party lines, so that people recognize that we have a nation that is worth saving, and recognize that nations divided against themselves cannot stand. In this time of discord, distrust and dishonesty, we ask that you would give us a spirit of gratitude, compassion and common sense and give us the wisdom to be able to guide this great nation in the future. We ask in the name of the Father, the Son and the Holy Spirit. Amen.

Trump listened with his eyes closed, hands clasped and head bowed. It’s uncertain if the media heeded his advice. Especially after all of the false propaganda being spewed about Russia and everything else instead of focusing on real corruption in the media, and the ongoing Clinton corruption scandals.