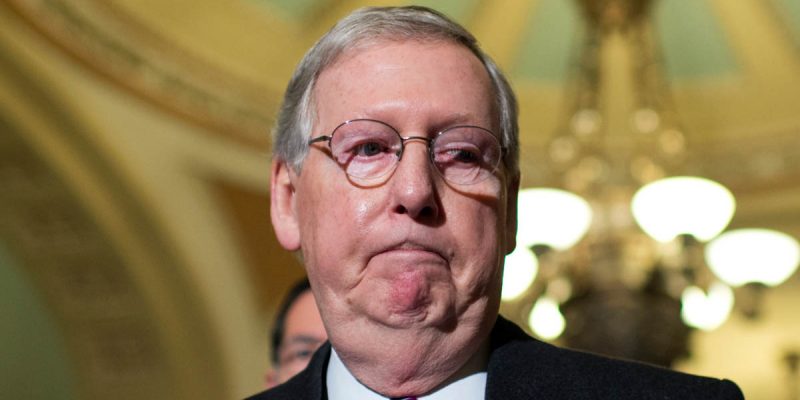 Senate Majority Leader Mitch McConnell has been a disaster for the Republican Party and has been a totally ineffective partner for President Trump in passing critical legislation. After failing on the vitally important bill to repeal Obamacare, McConnell and his Republican colleagues face a major test in the tax reform bill.

The stakes could not be higher for the GOP and President Trump. If they cannot show results to the American people, there will be a political bloodbath in the 2018 mid-term elections.

If they fail again on tax cuts, Democrat voters will be energized, and Republican voters will be disenchanted in the mid-term elections. Without a signature legislative achievement, there will be a national repeat of the disaster in the Alabama Senate race this week. In the showdown that resulted in a Democrat winning an Alabama Senate for the first time in 25 years, voter turnout in Democrat precincts was much higher than in Republican areas. After losing in a deep red state like Alabama, Republicans should be petrified about the 2018 mid-term election prospects.

The only way to turnaround their fortunes is to start following through on their campaign promises to the American people. This is why the tax cut vote next week is so important. Until now, Congress has delivered nothing except rhetoric. The real culprit has been the U.S. Senate. In fact, the House has passed hundreds of bills that have not even been considered by the Senate. In other cases, such as the Obamacare repeal bill, reform measures that passed the House have failed in the Senate, which has become the graveyard of good legislation.

While the President has been very successful on his own issuing executive orders, cutting red tape, eliminating useless regulations and taking unilateral actions, the Congress, particularly the Senate, has been an abysmal failure. Next week the U.S. Senate can begin to redeem its rather poor reputation. The bill is the most significant tax reform legislation since the Reagan tax reform measure of 1986.

While there is little doubt it will pass in the House, there is still some concern about its fate in the Senate. Currently, several Senators are in the hospital, while others have been demanding additional changes to the bill.

Incredibly, it seems the GOP is more comfortable as the minority party. They have been failing the all-important test of leadership. Along with the failure to repeal Obamacare, other aspects of the President’s agenda have stalled. Americans are still waiting for the border wall to be constructed. In addition, the Senate has been confirming the President’s appointments and judicial nominees at a very slow pace.

With the devastating loss in Alabama on Tuesday, next year there will only be 51 Republican Senators. In that majority are many “Never Trump” Senators like Ben Sasse (R-NE) and Bob Corker (R-TN). There are also Trump haters like John McCain (R-AZ) and Marco Rubio (R-FL). Finally, there are very liberal Republicans like Susan Collins (R-ME) and Lisa Murkowski (R-AK).

Overall, this group of Senate Republicans is an unreliable group to say the least. Nevertheless, the American people entrusted the congressional leadership reins to the Republican Party. If they can’t even pass tax reform, the rationale for their leadership positions totally evaporates.

If there is no tax reform bill passed next week, it will certainly not happen next year. If there is another failure, the GOP Senate may as well relinquish power to the Democrats in January. This will give the Democrats an early start, because they will eventually take back control of Congress if the GOP continues to fail to produce legislative accomplishments. Hopefully, Republican Party leaders realize that in the 2018 elections, the American people will not be played for fools again.