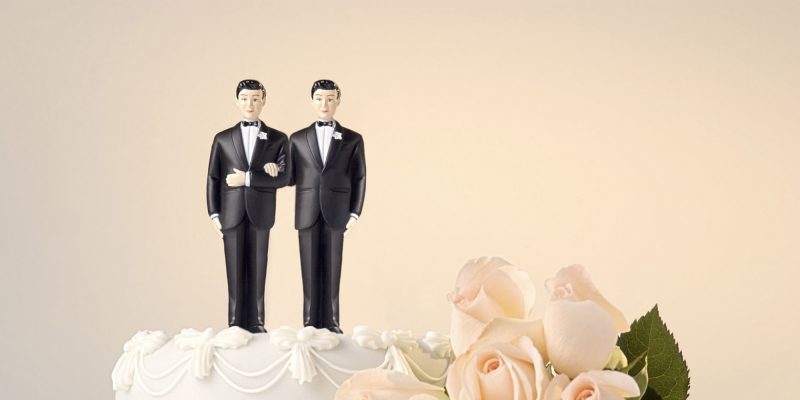 Good grief, if I hear one more thing about a baker and a same-sex couple, my head might explode.

Sorry, friends, but it is. It just is. It’s a slippery slope. It’s dangerous. It’s … well… just stupid.

The brouhaha began several years ago when owners of a bakery declined (Iet’s not say “refused,” OK?) to make a wedding cake for a same-sex couple’s wedding. The couple complained. The state fined the bakery. That’s BS, and for so many reasons.

First, let us assume, for the sake of discussion, that I tried to order a wedding cake for – oh, I dunno, an interracial wedding – and the bakery in question declined. Stupid of them. It’s money. My money is as green as anyone else’s. Next! Down the block I go, to bakers that respect commerce more than “religious conviction.” BOOM! I get a cake.

Now, let’s assume I’m a gay baker. (For the record, I have lived in my current abode for seven months and have yet to turn on either the stove or the oven; my kitchen is for making coffee, and nothing else.) A hetero couple comes in and wants a cake. Sure! Give me your money, I’ll bake you a cake! Easy.

I’m a Jewish baker and someone comes in wanting a cake with a Swastika on it.

I’m an African-American baker and someone comes in wanting a KKK symbol on a platter of white cake goodness.

Seriously. Enlighten me, someone. I don’t get it. Why in the world would you even WANT to force someone who doesn’t approve of you to make your wedding cake – even, especially, if there are other options for you.

The argument I’ve heard back is that same-sex couples in small towns might only have one bakery to choose. Yeah, I bet there are a ton of those. As in none.

Of course, anti-discrimination laws don’t exist only for the urban majority. They exist for reasons. Real reasons. Laws also shouldn’t exist when or if they cause more harm than good.

Thus, if SCOTUS rules in a certain way later this term, saying that the anti-gay-marriage bakery in question violated some imaginary constitutional provision requiring something that isn’t really there, the impact is far-reaching. It could reach your business, too.

Discrimination against anyone is antithetical to capitalism and profit. It’s not just morally wrong (despite what ersatz “Christians” might say), but it’s stupid. But there are limits, just as there are on the First Amendment.

A bartender can (and should) refuse service to someone who is already intoxicated. A waitress can have people ejected from a restaurant for grabbing her butt. A lawyer can refuse a client or case. A banker shouldn’t be able to refuse anyone’s money – and would be a fool to do so. As a political consultant myself, I don’t want to be required to work for a liberal communist, for example. Notwithstanding that a liberal communist shouldn’t even want me to, a ruling that calls the cake-baking fiasco a matter of constitutional discrimination opens the door for me – and you – to be sued, fined, held liable, for something the potential client wouldn’t or shouldn’t want us to do anyway.

To the plaintiffs: Make all the noise you want about these anti-capitalist, faux-Christian “business” people, but just get your cake somewhere else. I mean, really. It’s cake.

I’m an ordained minister. I have performed legal weddings for both hetero and homo couples, but at my own discretion. I am not compelled to perform any rite I find contrary to my beliefs. Should I be required to? If I decline, am I open to fines, lawsuits, public acrimony? In a few months, we may need to see what SCOTUS says.

This is an issue on which both sides should agree: Butt out, dear government. Liberals (and rational conservatives) don’t want to be forced to make cakes that say “GO, TRUMP!” and conservatives don’t want to make cakes for Planned Parenthood. So what? Move on. Let anyone who tries to force commerce, call “discrimination” at every turn, and interrupt the free market feast on crumbs. Let them eat cake.

Interested in more national news? We've got you covered! See More National News
Previous Article Al Franken Ungraciously Falls On His Sword For The Democrats
Next Article Why is the NFL Funding OPEN BORDERS?