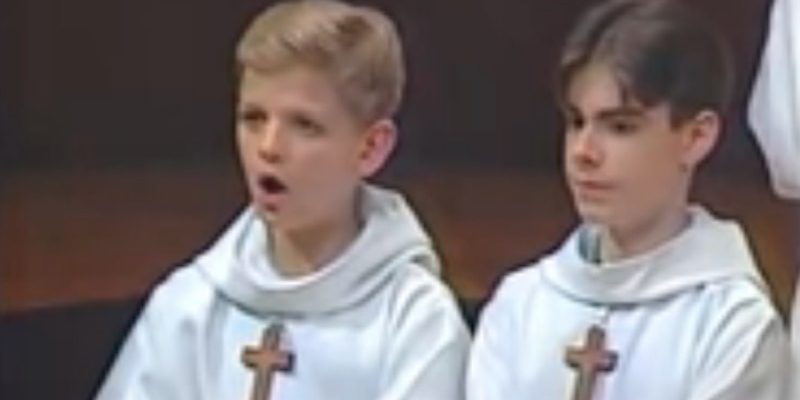 In case you’ve never seen this song performed during the holidays, you’re in for a treat.

Believe it or not, it’s a classic composed by Giovacchino Antonio Rossini (1792 – 1868) called, “Duetto Buffo Di Due Gatti,” (the Duet of Funny Cats). Rossini was serious when he composed it’; it’s not intended as a joke, but rather a song with one universal lyric (or word) that any singer of any nationality could sing. However, it is quite difficult to not laugh when hearing the universal language of cats– no matter who is singing it.

One of the most famous versions online was sung by the French soloists Hyacinthe de Moulins (L) and Regis Mengus of the boys choir, Les Petits Chanteurs a la Croix de Bois (PCCB), (The Little Singers of the Wooden Cross) in 2008.

They are now adults, but their performance as boys still appears to be the most popular online. Many adult vocalists sing the song, as the original was sung by an adult female vocalist.

In the version below, the French female vocalists Natalie Dessay and Camille are more “catty.” No pun intended.

Some versions include a male and female singer, to appear as if the male cat is courting the female. Each singer adds their own personality to the piece. The boys’ performance was more classic of a boys choir with soft soprano tones. The adult versions range from deep baritone to mezzo-soprano.

To date, no version of a dog duet exists. Meowing is easier to sing than barking is apparently.

Interested in more national news? We've got you covered! See More National News
Previous Article CROUERE: Tell The United Nations Goodbye And Good Riddance
Next Article Is Google’s Eric Schmidt a Human Rights Abuser? What level of Clinton Corruption is he involved in?