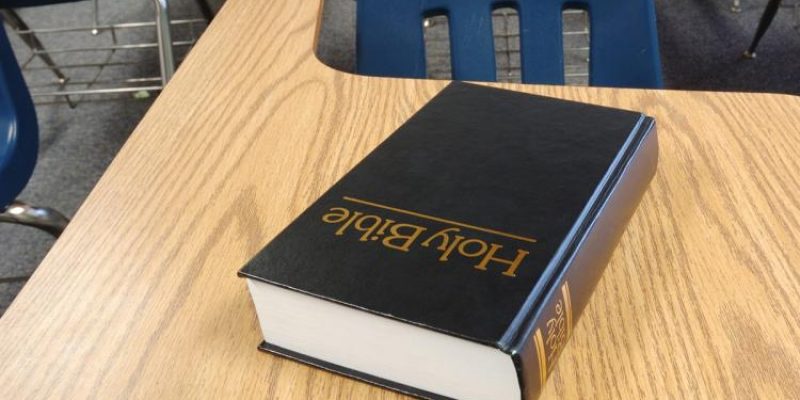 It also requires that federal and state laws be followed regarding religious neutrality, and was based on a similar bill that recently passed in Kentucky.

The bill states its purpose is to:

Since then two committee meetings have been held to discuss the bill and a revised version of the bill was introduced. It doesn’t require schools to offer the elective, but instead gives them the option to do so. So far, no action has been taken to move the bill forward.

Sen. Azinger explained why he cosponsored it:

The reason it’s the Bible only is because America was essentially founded on the Bible. It was integral to our founding.

Can we singularly teach one particular religion? Even though Hebrew Scriptures are part of the Bible, we are really only teaching Christian texts. I’m fine with that. I’m a Christian but I’m just wondering if we have to leave this open to teach other religions.

Azinger then remarked that the bill wasn’t about religion, but was about the Bible. He added, “You’re talking about the book that had more influence on America than any other book up to 1963. America was built on biblical principles.”

Angela Mann, a principal at Peterstown Middle School, told the committee that public schools already don’t have the resources to provide electives. She said, “The problem is in West Virginia, we don’t have the money to provide barely any electives besides what is required.”

Sen. Romano also offered an amendment to the bill that would allow teaching all religions in social studies classes. It failed by a vote of 5-7.

The senate bill comes after similar ones were introduced by Delegate Ralph Rodighiero (D-Logan) in 2015, 2016, and 2017. In 2015, HB 2499 called for “making available, as an elective course of instruction, the history of the old and new testaments of the Bible” by the completion of 12th grade. It did not make it out of the House Education Committee. In 2016, again a similar bill and outcome, and the same in 2017 with HB 2073.

Of these bills Rodighiero said,

The history of the Bible is fact—it’s factual history. Why not have that as an elective, something as popular as the Bible? A child should have a choice about what they want to learn about in their history class.

The 2018 senate bill comes after the Freedom From Religion Foundation (FFRF) sued West Virginia school districts last year over what it claims was a violation of the First Amendment. The suit resulted in halting Mercer County’s “Bible in the Schools” program last April and its teachers lost their jobs. By November the lawsuit was dismissed after the program was suspended in May.

The Mercer County Board of Education voted to suspend the “Bible in Schools” program for at least one year in order to review and modify the program. The Bible program was still offered as elective classes at Bluefield and PikeView high schools.

According to debate.org, 59 percent of poll respondents agree that the Bible should be taught in public schools.

Interested in more national news? We've got you covered! See More National News
Previous Article Why Do Olympians Bite Their Gold Medals? [video]
Next Article Did You Hear About Southern Law School’s Investigatory Review In The Helen Plummer Case?