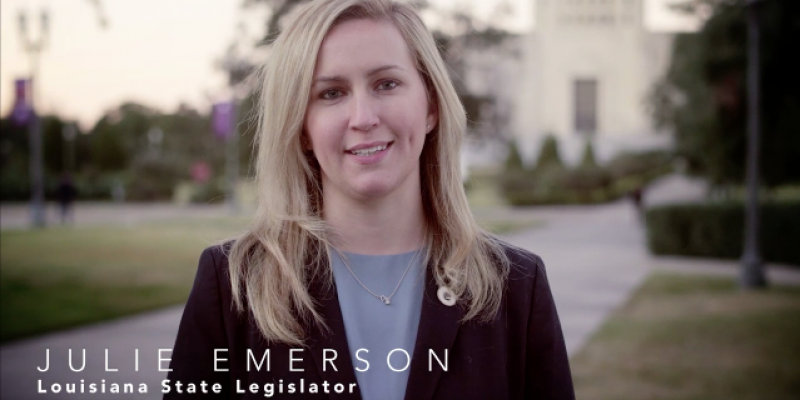 State Rep. Julie Emerson (R-Carencro) has racked up yet another honor. She has been named as one of America’s most persuasive millennial activists and politicians.

Emerson gained national attention with her video announcing her entry into the LA GOP race. The video was targeted towards millennials. The Hayride’s Charles Keenan wrote the following about Emerson last month:

Rep. Emerson is one of the most popular young legislators in Louisiana. She also happens to be the youngest one. Her work across the party aisle last year for criminal justice reform made national headlines. Yet, a true member of the so-called “Party of No”, she still has one of the most conservative voting records in the Louisiana House of Representatives.

After 14 years, Roger Villere is retiring as chairman of the Republican Party of Louisiana. Chairman Julie Emerson would certainly be a jolt of lightening into a state party that has had some trouble fundraising over the past couple of years.

Emerson has many things going for her. She’s young and hungry, she’s a committed conservative, and passionate about her beliefs. Those are things are important in a state party chair. Emerson is a very attractive candidate for state party chair and receiving yet another honor will surely help her candidacy.

Interested in more national news? We've got you covered! See More National News
Previous Article There Is Absolutely No Reason Whatsoever To Believe JBE’s Claim The State Is Saving Money On Medicaid
Next Article By The Way, Did You See What The Legislative Fiscal Office Did To JBE’s Tax Hike Plan?