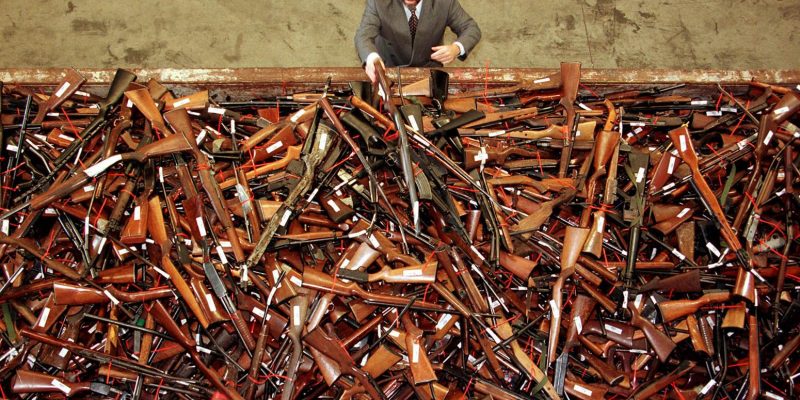 Major gun control legislation was enacted in Australia in 1996 after a mass shooting occurred at the historic Port Arthur former prison colony and popular tourist site in southeastern Tasmania, Australia. A gunman opened fire on shop owners and tourists with two semi-automatic rifles, killing 35 and wounding 23. It was the deadliest mass shooting in Australian history.

Within three months the newly elected conservative Prime Minister John Howard announced a bipartisan deal with state and local governments and enacted the “National Firearms Agreement.” A decade and a half later, government officials maintained that the policy “worked really, really well” and was the primary reason why no mass shootings occurred since 1996.

The law included a government buyback of more than 600,000 semi-automatic shotguns and rifles, representing one-fifth of all firearms in circulation in Australia. It also prohibited private sales, required gun owners to register their weapons, and for new gun purchasers to prove why they needed a gun with a “genuine reason,” which excluded “self-defense.” The legislation received roughly 90 percent of public support at the time.

Several studies attribute a decline of gun violence to the effectiveness of the National Firearms Agreement. Homicides committed by firearms is reported to have been reduced by 59 percent between 1995 and 2006, and suicide by guns decreased by 65 percent.

Gunfacts.info maintains that the gun control legislation had no effect on homicide rates. The site reports that homicide rates for seven years before and after the ban “are identical down to four decimal places (a slope of -0.0286)” on a graph based on data it analyzed. The site maintains that “homicides were falling before the gun ban and after the gun ban; the rate of decline was identical before and after.”

It also states that over the last twenty years firearm-related murders increased by 19 percent, armed robbery increased by 69 percent, and home invasions increased by 21 percent. (It does not provide sources to support these claims.) It also references a study conducted ten years after the Port Arthur shooting, which concluded that the gun ban had no effect on crime rates, and that a decline in gun-related homicides after Port Arthur evidenced an already ongoing trend.

However, the paper’s methodology was discredited, according to the Washington Post. Peer-reviewed papers also noted that a decrease in gun-related deaths more than doubled after the gun buyback program, including a 2011 Harvard report.

The former Australian Prime Minister John Howard visited the U.S. after the Aurora, Colorado school shooting. He wrote an op-ed in which he argued that America needed to get rid of its guns but never would because of the National Rifle Association and the “gun culture” of the U.S. He wrote, “so deeply embedded is the gun culture of the US, that millions of law-abiding, Americans truly believe that it is safer to own a gun, based on the chilling logic that because there are so many guns in circulation, one’s own weapon is needed for self-protection. To put it another way, the situation is so far gone there can be no turning back.”

Whether or not the gun control measures in Australia worked remains to be seen. However, the biggest problem with the gun control law is that it denies individuals the right to self defense, which is a right Australians, unlike their American cousins, don’t have.

The reason why the U.S. will never ban guns is because the right to bear arms is the second most important right the founding fathers articulated in the Bill of Rights. The Second Amendment would need to be abolished to implement Howard’s plan, which will not happen, save another Civil War.