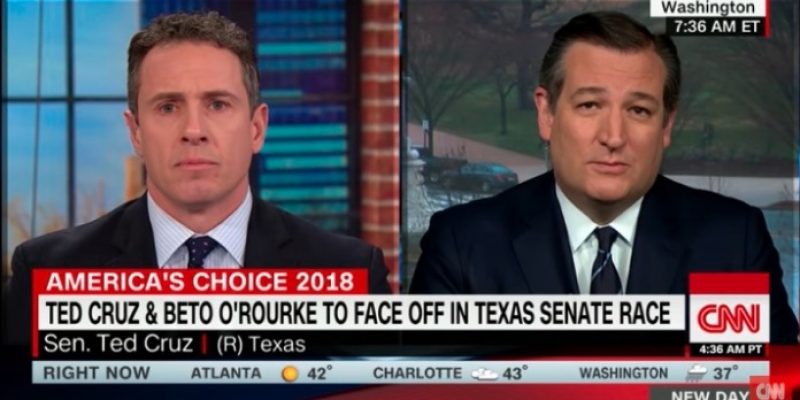 In November Texans will vote for either Republican Ted Cruz or Democrat Beto O’Rourke. Cruz recently poked fun at O’Rourke’s first name, noting it is not Beto, but Robert Francis. Beto is a Hispanic nickname for Robert.

Cruz was pointing out in his ad that he is the more authentic Hispanic running for U.S. Senate. O’Rourke isn’t remotely Hispanic– he’s Irish. Here’s the jingle:

If you are going to run in Texas, you can’t be a liberal man. I remember reading stories, liberal Robert wanted to fit in. So he changed his name to Beto and hid it with a grin.

CNN host Chris Cuomo went crazy claiming Cruz is a hypocrite, his real name is Rafael Edward, and he was born in Canada. Cruz’s reply was great:

In response to criticism by the leftist propaganda machine, Cruz’s campaign manager posted online examples of O’Rourke’s name use.

And he penned columns in college as Robert and rowed crew at Columbia using the same.

He tried to join the Hispanic caucus for crying out loud. https://t.co/7FDgdPB7ny

Criticism over O’Rourke’s name is not new. When O’Rourke announced he was running for Senate last year, the Washington Free Beacon published an article, Meet the Irish-American Going by a Mexican Nickname Challenging Ted Cruz, claiming that O’Rourke’s “Mexican nickname” helped him beat an Hispanic opponent in the Democratic primary.

Cruz’s plan is to make clear to undecided voters that his opponent is not Hispanic and is trying to be someone he isn’t.

Interested in more news from Texas? We've got you covered! See More Texas News
Previous Article VIDEO: Remy’s Latest Is A Bit Of A Buzzkill, But We Like It…
Next Article Miami-Dade officials considering tiny homes to tackle housing crisis