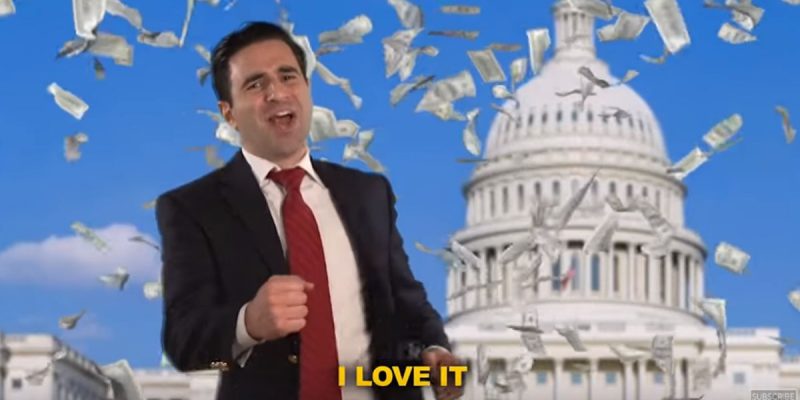 …hell, we love it. We want some more of it. Here’s Remy’s knockoff of the Tim McGraw classic…

The Republicans in Washington haven’t even made much of a pretense toward fiscal restraint since capturing the White House to go with majorities in the House and Senate. The federal budget and the deficit have grown – the fiscal 2017 deficit, which was an Obama product, was $587 billion, while it grew to $666 billion in Trump’s first year this year and it’s projected to top $1 trillion soon and stay there on an annual basis.

At some point we are going to have to rein in spending. And Remy is completely correct to ridicule the Republicans for campaigning on fiscal restraint and then breaking that promise when it’s time to govern. There is no doubt the Democrats have played a destructive role in the budget process, which brings us to something like a reprise of the 1980’s in which defense spending was bought with domestic spending at the price of a spiraling national debt, but at some point the fiscal responsibility piece has to be played.

Now, a couple of things should be said on this.

First, Donald Trump did not run and win on balancing the federal budget. Trump, of all the GOP 2016 contenders, had the least to say about that subject. He talked about America winning again, and he talked about putting the country back to work. Essentially, he was about economic growth, not a tight federal budget. So you can’t really say Trump fits in the box Remy’s building of Republican drunken sailors who got elected on fiscal sanity – he’s never been about that. Lots of Republican congressmen and senators fit in that box, but not Trump. And without Trump on board, you’re just not going to win budget fights with the Democrats. It just isn’t going to happen.

And second, Trump’s Office of Management and Budget (OMB) does have a plan for a balanced budget. In February they put this graph out plotting their budget strategy… 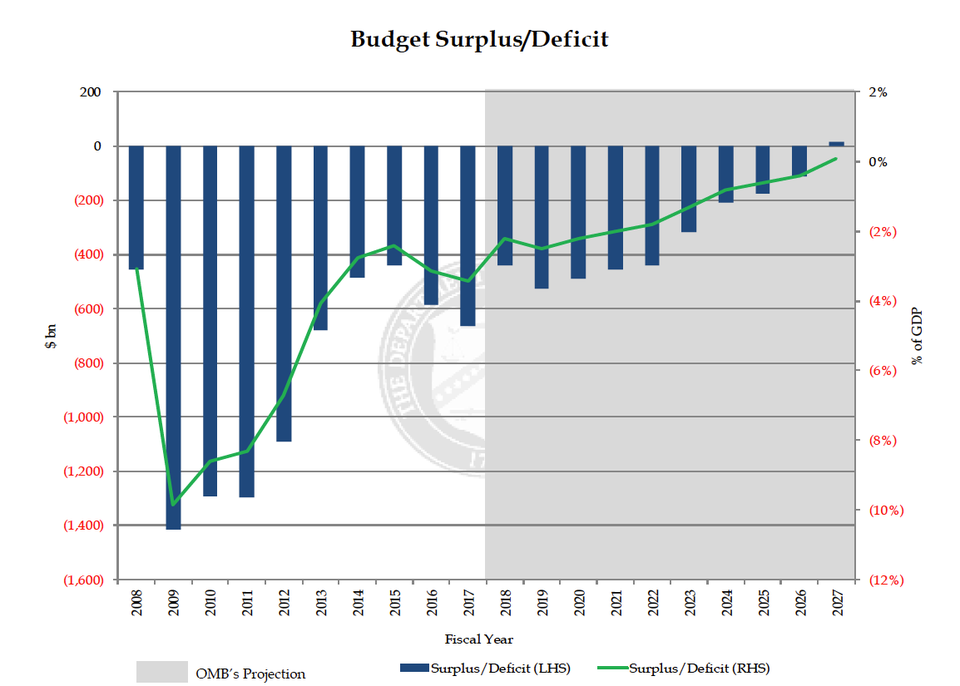 Most other forecasts are nowhere near as promising as that one, which indicates a balanced budget 10 years out.

But on the other hand, there certainly seems to be some evidence that the economic growth piece on which the OMB projections are based is beginning to form. After all, the economy created a TON of jobs last month…

The US economy added 313,000 jobs in February. That was much stronger than economists expected and the biggest gain since July 2016, according to Labor Department figures published Friday.

The unemployment rate stayed at 4.1%, the lowest in 17 years.

Wages grew 2.6% compared with a year earlier, a few notches below the pace in January. That delighted investors: The Dow opened up 150 points.

More modest wage growth cools fears about inflation and rising US interest rates, both of which spooked the markets last month. The initial wage growth figure from January was revised down a notch, too.

In the first two months of the year, the United States has already added more than half a million jobs. February also marked the 89th consecutive month of job gains, the longest streak since the Labor Department began keeping track in the 1940s.

More Americans are coming off the sidelines and into the job market. The participation rate, which reflects people who are working or looking for a job, registered its best one-month gain in nearly eight years and is at 63%. The rate has been in long-term decline for several reasons, including Baby Boomers retiring.

The past three months have seen the economy soaking up a lot of the available workforce and, as the labor participation rate’s rise shows, it’s beginning to empty out some of the people who were no longer counted as unemployed for having abandoned a job search long ago. Trump’s policies do appear to be putting the country back to work. At some point those job numbers won’t be sustainable because we’ll be in a situation where we’e not only achieved full employment but we’ll have a bona fide labor shortage. We already have that in the skilled trades, thanks to decades of forcing kids through four-year colleges which have largely become political indoctrination centers dispensing useless and often destructive information when what lots of those kids really needed was trade school. That’s a policy and cultural battle which is coming, and coming fast, and the battlefield is being prepared now by the move to full employment.

The long term effects of that on the federal deficit should be positive. It was the Reagan economic expansion which allowed for the federal budget to finally balance at the end of the 1990’s, after all.

We’ll see if the GOP has the electoral strength to win elections this fall and 2020 and consolidate the power it needs to capitalize on all this job growth by starting to scale back entitlement programs (the more people are working, the less they need to be on the dole). Trump might just prove Remy wrong after all.

But in the meantime, it’s worth doing to shame these guys for not holding the line on federal spending – even if it’s done with a sense of humor.