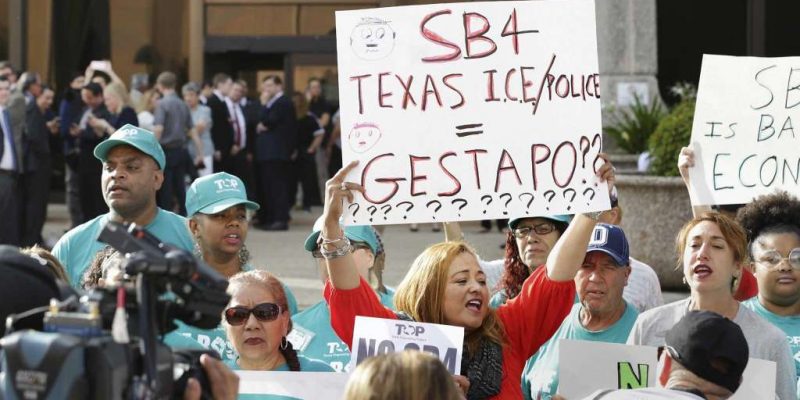 According to the New York Times, the Houston Police Department said officers had asked detainees about their immigration status only twice since September. In Austin, only once. The Times points out that there is a disconnect between the law that was passed and officials sworn to uphold the law who aren’t in the primarily Democratic-led cities.

It writes: “The low number of reported inquiries illustrates the conflict between the state Republican leaders behind the law and local elected officials and law enforcement in largely Democratic major cities like Austin, Dallas, Houston and San Antonio.”

After the court’s ruling Houston Mayor Sylvester Turner attended a rally of opponents to SB 4 and said, “It remains my position that the Houston Police Department is not U.S. Immigration and Customs Enforcement and H.P.D. should not function as an arm of ICE.”

Sanctuary sheriffs like those in Travis County and Democratic gubernatorial candidate Lupe Valdez must now follow the law. Lt. Gov. Dan Patrick said in a statement, “Hopefully this ruling will make the law crystal clear for those liberal public officials in some Texas cities who have flaunted their opposition to S.B. 4 and misrepresented its intent.”

SB  4 doesn’t only prohibit sanctuary city policies. It also mandates that officials who violate the law be fined, jailed and removed from office.

After SB 4 became law, the cities of Austin, Dallas, Houston and several counties sued the state to block the law, arguing it was unconstitutional. The appeals court disagreed. Lawyers representing the group suing the state said they were considering appealing the decision to either the full Fifth Circuit or to the U.S. Supreme Court.

Parts of the law went into effect after a court ruling last September. Now, the court’s ruling allows for nearly all of the law’s provisions to be implemented.