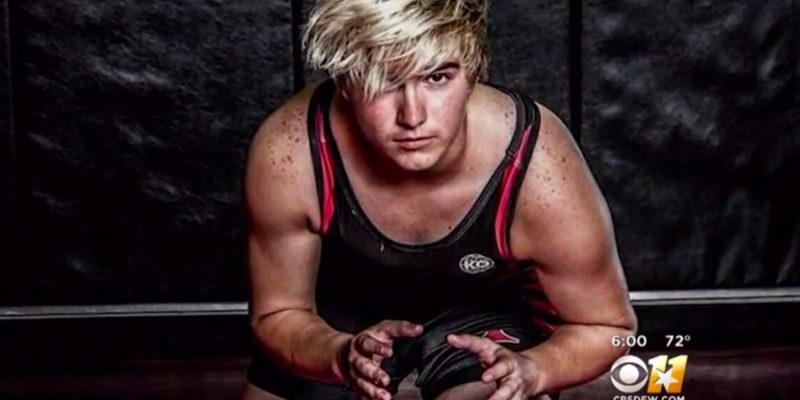 For those who are unaware, girls wrestling tournaments exist. In Euless, Texas, a suburb outside of Dallas, an 18-year-old Euless Trinity High School female student who thinks she is a boy has been taking testosterone and steroids to “transition” into being a man– while also competing on its female only wrestling team.

Powered by taking doses of testosterone and anabolic steroids, Mackenzie “Mack” Beggs is “undefeated” and won her second Texas’ girl’s Class 6A 110-pound division title at the end of February at the UIL State Wrestling Championships. Her non-testosterone-taking challenger, Chelsea Sanchez, is the same opponent Beggs beat in 2017 for the same title.

Unfortunately, parents of female athletes are not protesting or complaining loud enough against this girl’s drug-enhanced performance. To do so is viewed as politically incorrect and “gender-insensitive.” A last-minute lawsuit did attempt to stop Beggs from competing, the Blaze reported, but it failed.

Texas law requires that athletes must compete on a team that reflects the athlete’s gender stated on his or her birth certificate. Beggs was denied permission to compete in the boy’s wrestling division. The deputy director for the state’s University Interscholastic League, Jaime Harrison, told Fox News that “the birth certificate rule was approved in 2016 by the University Interscholastic League – the governing body for Texas high school sports … to help schools determine competition.”

However, fans in the audience were not happy with Beggs being able to compete or stealing the title from the rightful best female athlete in that weight class. Sports News Dallas Daily writes,

A piercing cascade of cheers and boos enveloped Beggs at the end of the match, the last of his high school career. He responded by repeatedly tapping his chest and turning in a circle so that every soul in the Berry Center, pro and con, could see him.

End of Mack Beggs title match was chaos. Had huge lead, nearly got pinned, then came the crescendo of cheers/boos. pic.twitter.com/FrLixVsTAj

But the fact that Beggs was allowed to take performance enhancing drugs when doing so is prohibited is what gave her the unfair and unnatural advantage. Without the drugs it’s unlikely that Beggs would have won.

Beggs’ unashamed mother, Angela McNew, disagrees though. She argues that her daughter’s talent and wrestling strategy is the reason for her success– not her male hormone therapy. She told the Associated Press,

She’s right anyone can win with the unfair advantage of taking steroids– that’s why they are banned.

Beggs argued that the law discriminates against her and violates her “civil right” to compete as a male – even though she is a biological female. She said,

But what can I tell people? I can tell the state Legislature to change the policy, but I can’t tell them to change it right now. All I can hope for is that they come to their [senses] and realize this is stupid and we should change the policies to conform to other people in my position.

Sanchez would have most likely won last year and this year. If Beggs wants to compete and play fair than she should not take steroids.

And– if she is really a boy– she wouldn’t need to take testosterone. She is taking male hormones specifically because she is not a male.

If she was a male and she was taking hormones and steroids she would be disqualified. Testosterone and anabolic steroids increase muscle mass and strength gains– that is why they are prohibited from use in competitions.

Unfortunately, although illegal, the LGBTQI agenda has persuaded state officials to accommodate gender dysphoria by allowing for an exception to be given to Beggs. Using performance-enhancing testosterone hormone therapy is permitted because doctors prescribed it to her for “valid medical purposes.”

Why wouldn’t every other athlete then get a note from their doctor stating that taking performance enhancing drugs was “medically necessary”? Better yet, make no exceptions at all for anyone.

She can pretend to be a boy and compete as a girl with girl strength without any performance enhancing drugs. Otherwise she is just cheating and she should be stripped of any awards she’s received.