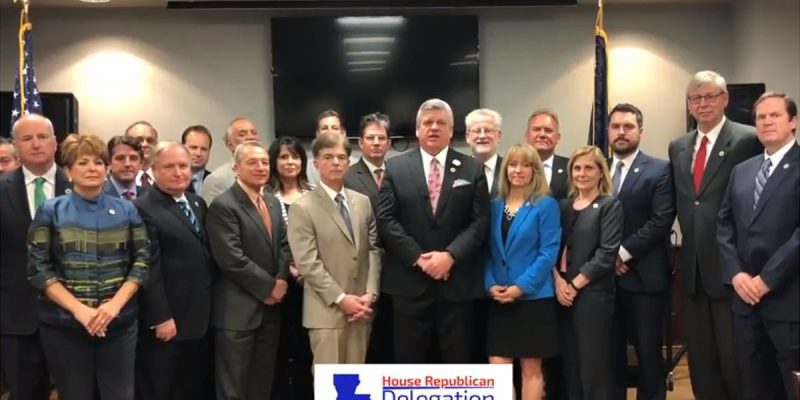 …isn’t so much that its content is eye-popping. It’s that the video went out at all.

“Despite what some may say, you can’t spend your way out of debt,” said Representative Harris.

Harris also cast doubt on the size of the so-called “fiscal cliff,” saying “We do not have a billion dollar budget deficit. That’s a fact.”

“We are looking forward to working with the House GOP Delegation during this session and in the future to oppose government growth and waste,” newly-elected LAGOP Chair Louis Gurvich said.

That it isn’t true Louisiana has a billion-dollar budget deficit, as was advertised ad nauseam by Gov. John Bel Edwards and his lickspittles in the legacy media in advance of the special session he called in order to attempt tax increases last month, is not news. At least not to our readers, who’ve no doubt seen our countless posts on the subject.

But the delegation found itself buffaloed throughout that special session by the “fiscal cliff” howling in the media and the governor’s nonstop Chicken Little messaging. That was all strategic, of course – there is a long strain in modern progressivism of manufacturing at least the perception of crisis in order to make policy the public would never tolerate otherwise, and the “fiscal cliff” narrative was an attempt to raise taxes on the constituents of the Republicans in the legislature.

Let’s bear that in mind. The aim of the special session and the strategic messaging around it was to raise taxes on Republican interests. If it weren’t, the special session would have been about renewing the sales taxes passed two years ago to “stabilize” the budget amid a “fiscal cliff” Louisiana dealt with then, amid a crash in oil prices and a steep recession in Louisiana’s economy. This was seen as a preferable alternative to right-sizing a Louisiana budget of $25 billion at the time.

Those taxes expired, because House Republicans would only agree to them for a two-year window during which they expected to see spending reforms passed. But instead, the Governor wouldn’t cooperate with those and the Senate struck them when the House passed legislation therefor, and thanks to Edwards’ Medicaid expansion Louisiana’s budget swelled to $30 billion this year. And while some $4 billion of that number might have been federal Medicaid dollars coming in, another $1 billion was state money.

Had that $1 billion in state money not been spent, there would be no reason to talk of a “fiscal cliff.” Louisiana would be running a sizable surplus.

And with some $300 million in fresh cash hitting the state’s coffers thanks to the federal tax reform passed in December, there is not billion-dollar “fiscal cliff.” The real number is considerably less.

That the GOP delegation is willing to go on the record on a video staking out that position is important, because for what’s really the first time they’re now attempting to take the messaging initiative and becoming proactive in articulating their point of view. You need to do this if you’re a Republican in modern politics, because you cannot expect the legacy media to help you in explaining your position to the public. They will do the opposite.

That’s been known, obviously. The change here is that instead of throwing their hands up and complaining that they’re going to get beaten to a pulp by the Advocate and the Times-Picayune no matter what they do, this video is evidence that they’re willing to do something about it.

Why the change? Well, we know that the delegation has hired Lionel Rainey, the Baton Rouge-based political and PR consultant whose name keeps popping up with respect to successful campaigns around the state – including most recently with John Kennedy’s Senate campaign in 2016 and John Schroder’s campaign for Treasurer last year. Rainey’s modus operandi is not to be reactive in messaging; to the contrary, his clients go on offense and pull no punches. The videos we’ve posted periodically of Rep. Cameron Henry, the House Appropriations Committee chairman, talking about the state’s budget, are an example: Henry is a client of Rainey’s.

And that means this is merely an opening salvo in what we can expect will be a campaign by the delegation to start telling a much different story than the one the governor and his media pals have forced down the throats of Louisiana’s taxpayers.

There are a lot of members in that delegation, and many of them have told us they’re fed up with having demands made of them by the Powers That Be. In the special session they bent, but didn’t break, on what could have been a deal to raise taxes, only to be blamed by Edwards when he lost control of his own side in the negotiations. Now, they’re the ones seizing the initiative.

It’s another step toward the independent legislature people have begged for all along. We’ll see how well the people begging for it several years ago like seeing the actual product now.