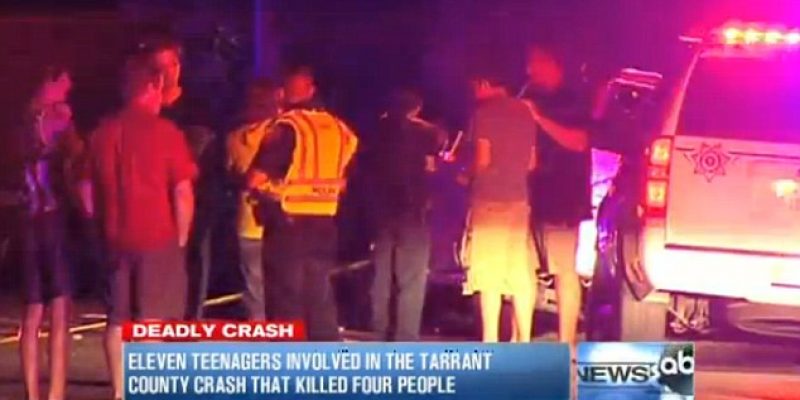 Vehicular homicide used to warrant prison time, and especially if the offender was intoxicated while driving. Unfortunately, this was not the case for the then 16-year-old Ethan Couch, who killed four people and injured nine others while driving under the influence of alcohol and drugs on June 15, 2013, in Burleston, Texas.

Couch was driving on a restricted license and speeding in a residential area. He collided with a group of people who were assisting another driver with a disabled SUV. He killed four people and inured nine. Two passengers in his truck suffered serious bodily injury, one was completely paralyzed.

And what was Couch’s sentence? Ten years of probation.

What was his defense? A new term a psychologist used at his trial: “affluenza.” Being a spoiled rich kid made him do it. He was irresponsible because his family was rich.

There are plenty of rich kids who are responsible and don’t kill people.

The problem isn’t wealth, it’s judges who don’t enforce the law. Judge Jean Boyd was intensely criticized for not sending Couch to prison, including calls for her to step down.

The ABA Journal reported that at a February 5, 2014 hearing, Eric Boyles, whose wife and daughter were killed in the crash, said, “Had he not had money to have the defense there, to also have the experts testify, and also offer to pay for the treatment, I think the results would have been different.”

Six multi-million dollar lawsuits were filed against Couch and his family, all of which were settled out of court.

Couch never learned his lesson during probation. Instead, he went to a party where alcohol was served in 2015 and pictures of him being there were posted on Twitter. A warrant was issued for his arrest for violating his probation after he apparently “went missing.”

What did his mother, Tonya Couch, do?

She fled to Mexico with him to avoid him going to jail.

She now awaits trial on charges of hindering apprehension of a felon and money laundering.

When will these criminals be locked up?

Couch was flown back to the U.S. on January 28, 2016.  His case was transferred to the adult court system and his probation was extended to 2024. On April 13, 2016, the court sentenced Couch to serve four consecutive terms of 180 days in jail (one term for each of the 2013 car crash victims) equaling two years in jail. He served less than two years and was released today, according to Tarrant County sheriff spokesman David McClelland.

According to the Daily Mail, Fred couch, Ethan Couch’s father, has a long list of criminal and traffic citations against him on record from speeding charges, theft, and assault against his now ex-wife, Tonya.