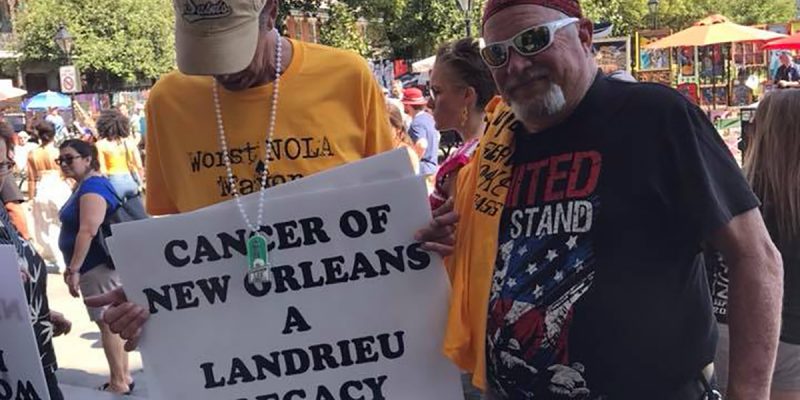 Mitch Landrieu had his one and only scheduled public book reading event on Sunday, March 25th and a group of disappointed citizens gathered for the opportunity to get face time with Mitch.

The New Orleans Mayor has kept a very high profile nationally, making dozens of appearances on the big television news outlets since the monument removals.  But locally, Mitch has been much more low profile.  When in town, he appears for media events, or disasters such as the S&WB, surrounded by staff and public servants.

The Faulkner Book Society hosted a “Meet The Authors” event at the Presbytere.  Seeing this event announced, an effort was made to “Resist Mitch.”

The Marxist destroyers of Take Em Down had a march to remove monuments of five people that same day, one of whom was John McDonough who donated substantial sums of money to build public schools in New Orleans.  The Take Em Down contingent learned of the Resist Mitch movement and crashed the mayor’s book reading.

Meet The Authors’ thin attendance only had a few elderly people who actually showed up to meet Mitch Landrieu.  Some from the Resist Mitch group believed the attendees were mostly acquaintances of Walter Isaacson’s as one was a relative.

The museum staff let the Resist Mitch crowd gather outside the Presbytere’s door. Malcolm Suber, Michael Quess Moore, and the other Take Em Down people vocally challenged Mitch, some went inside.  The preservationists waited further back.

It appeared that Mitch walked out of his book event in great spirits only to crash back into the real world he has largely avoided.

Moore offered a “critique” to Mitch, mainly complaining that the mayor stole their platform and used it for his own gain.  Mitch did not mention Suber or Take Em Down in his book.

“There is a history of…years of equity being taken in the mouths of white people, particularly white men of a particular privilege, to do what they think is a justice to us or a favor to us.  It ends up not being a favor, just listen to what I’m saying.”  As Moore speaks to Landrieu, you can see Mitch’s face, head, and ears getting redder and redder. “Yeah you did it to sell more books, but what I’m saying is–”

“I did it for me,” Mitch told Moore, revealing the unquestionable, self-serving agenda of Mitch Landrieu. “Because it was the right thing to do.”  Nice attempt to cover, Mitch.

“But the right thing to do and this is what we’re saying is to acknowledge the people that put 40 plus years of work into this.”

They bicker over Moore’s age which he ignorantly says, “You can’t tell me how old I am.”

“All this work came before you.  Establish a platform for them, that’s how you’d be a good ally, better than an ally, a comrade.  But when you do it like this, you coopt and steal a narrative and perpetuate the same system of supremacy and privilege that you say you’re fighting against.”

Take Em Down wants credit for something they didn’t start.  Malcolm Suber has admitted previously that Take Em Down did not start the removal talk.  “Regarding all the attention to the NOLA mayor’s speech in May, we have to recognize that he did make the initial motion that he would take down four monuments,” Suber was quoted telling Workers World in July 2017.

A point Mitch and Take Em Down both missed is that Mitch could have included them in his book as part of the fictitious grassroots movement that grew from the monument issue.  Mitch is likely too embarrassed and politically guarded to include anything about Take Em Down’s greater “Remove it all” agenda.

If Take Em Down was actually serious, all they had to do was go before the City Council and request a review of their targeted monuments as they pertain to the Nuisance Ordinance.  They have not.

One thing that should not be lost in the exchange recorded between Mitch and Moore was the mayor asking at the start, “Tyronne was in touch with you, right?”  “Absolutely, absolutely.”  Tyronne Walker worked as Communications Director in the Mitch Landrieu administration.  Walker also made at least one public statement during the monument review “process” in 2015, he was not working for the city at the time.

Walker told the Advocate that “Any rumors are not worth responding to because there’s a million and one going around. (people) have no clue about when and how these monuments are coming down, and we’re not talking about it because of safety concerns,” Landrieu’s communications director Tyronne Walker said when word leaked that Liberty Place monument would be removed in April 2017.  (Walker was wrong in his denial.)  But note that the communications director from Landrieu to the media was also “absolutely in touch” with Take Em Down NOLA and heavily steered the fraudulent “safety concerns” angle allowing Mitch to remove the monuments without accountability.

Once Moore finished addressing that Take Em Down should get credit for something they did not initiate or execute, Mitch made a dash for his waiting SUV.  Mitch exited the Presbytere with a big smile on his face that quickly turned to a look of horror.  The preservationists awaited Mitch with signs and even some Mitch Landrieu Voodoo dolls.  One man walked with the mayor to the car, telling Mitch about the wrongs he has done for his own gain, his failures as mayor, and delusions of grandeur.

NOPD was on the scene, but Mitch had what appeared to be an off-duty officer as his security.

A preservationist submitted the following statement: “We are here showing continued opposition to Mitch Landrieu and his campaign of lies. People of New Orleans have very vocally opposed Mitch since the beginning of this scam he camouflaged as ‘democracy.’ The absentee mayor wrote his book of lies while the city flooded and was overridden with major crime, now he’s traveling the country doing a book tour all the while collecting a paycheck on the backs of New Orleanians. Mitch Landrieu is the worst mayor in New Orleans’ 300 year history.” 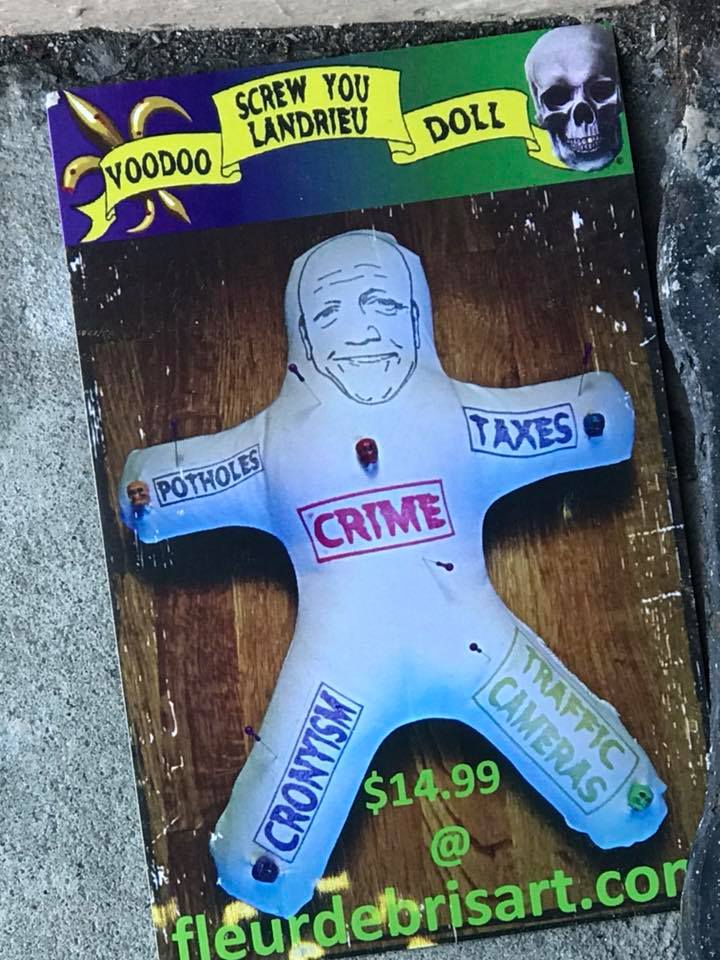 Interested in more news from Louisiana? We've got you covered! See More Louisiana News
Previous Article SICK: Parkland Shooter Cruz Receiving Fan Mail and Money from Admirers
Next Article On The Issue Of TOPS, And The Plot Against Funding It