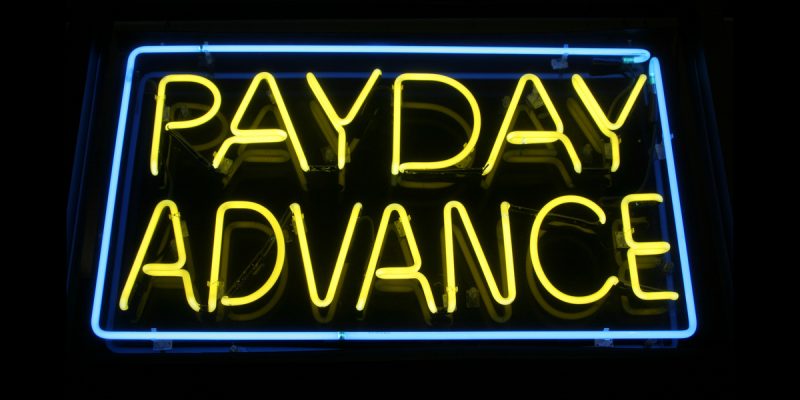 …and the never-ending attempts to kill the payday loan industry, supposedly on behalf of the people it “victimizes” but who generally don’t appear to be all that broken up about their victimization, are still playing a role at the Louisiana Legislature.

There is a bill sitting on the Senate calendar called the Louisiana Credit Access Loan Act (SB 365, authored by Sen. Rick Ward), which would essentially keep the industry from completely shutting down by June of next year. And the Left is screaming about the bill and mobilizing people to kill it, and a $240 million, 6,000-employee industry in Louisiana, in the process.

We’re going to oversimplify the timeline here in the interest of brevity, because this issue can be a bit “in the weeds” since it involves the regulatory process. The long and short of this is during the Obama administration, some of the key funders of the Democrat Party – most notably a man named Herb Sandler, who together with his wife Marion essentially broke Wachovia Bank by dumping $15 billion in bad subprime paper on them before the housing crisis hit and who skated away from that mess with enough money to bankroll something called the Center for Responsible Lending – declared war on the payday loan industry around 2014.

That war originated in state legislatures, where a number of bills circulated which aimed to greatly curtail the ability for the payday loan industry to function. In Louisiana, there were a raft of bills filed, backed by the Soros-funded Together Louisiana, which would limit the payday lenders to essentially 1.38 percent interest they could charge every two weeks – an absurd result coming from a prospective restriction of a 36 percent APR annually; the effect of which would be that if you were taking out a payday loan the law would restrict them to charging you terms a whole lot more generous than any bank would ever dream of.

That same year Rep. Cedric Richmond (D-Louisiana) filed a bill in Congress which would have given the Post Office permission to write payday loans, something which might not sound like such a terrible idea until you give it about five minutes of thought and realize what a managerial mess the Post Office is and how much of a frightening overreach into your privacy it would be if the government was the borrower of last resort and would then know when you’re having money problems.

None of these bills passed in either the Louisiana legislature or Congress, and that’s basically how it went in other state legislatures. So in November of 2016, when the Obama administration was a lame duck, his Consumer Financial Protection Bureau – the brainchild of Elizabeth Warren, of course – instituted a set of regulations called Rules For Small Lending. These were fairly restrictive, as you might imagine; by CFPB’s own estimates they’d put about 80 percent of the payday lending in the country out of business.

Some highlights, or lowlights, of what CFPB did…

And Forbes noted another nonsensical provision tucked into the 1,690 pages of the CFPB rule…

This was one of the regulations the Trump administration and Congress couldn’t kill in time last year, so it’s set for final implementation in September of 2019. The whole industry is planning to disband in June of next year other than in states where there are bills passed making payday lending both CFPB-compliant and still viable.

Which is what Ward’s bill does.

Basically, here’s what’s in the bill…

It essentially converts the payday loan industry in Louisiana into an installment loan industry. Which is a governmental overreach nobody really needs – a 2015 poll by KRC Research showed that 69 percent of the users of payday loans opposed the kind of aggressive regulations CFPB has imposed, and in 2013 Harris Interactive found that some 95 percent of those borrowers were opposed to those regulations – but it’s either this or the industry goes away altogether.

And we know this, because CFPB was bombarded with data to that effect, then went and put the regulations in anyway.

It’s possible this will get addressed at the federal level, either by CFPB director Mick Mulvaney, who doubles as the director of the Office of Management and Budget (and who presented himself as a certifiable badass by turning the CFPB’s lack of transparency on its creators earlier this month), or by Congress. Whether that’s doable or not is an interesting question – the same people who began this attack on payday lending are now doing everything they can to kill any efforts to halt the implementation of that rule.

And as RedState has noted, those people have been joined by Google. The internet giant, as it turned out, made a $1.5 billion investment into LendingClub, the peer-to-peer loan site, back in 2013 and has been on board with the assault on payday lending ever since. Payday lenders are not allowed to advertise with any of Google’s products or platforms, which is both (1) somewhat understandable given that they’re now competitors with Google to an extent, and (2) also the kind of creepy monopolistic practice which argues strongly for someone coming along and treating Google as a trust needing to be broken up like Standard Oil and Ma Bell. But we digress.

Predatory payday lending drains more than $240 million each year from Louisiana workers by saddling vulnerable borrowers with high-interest loans that they often cannot afford. But instead of working to address this problem, the Legislature is considering a bill that would make it worse.

Senate Bill 365 aims to expand predatory lending in Louisiana by allowing payday and car title lenders to issue “installment loans” with annual interest rates of up to 167 percent. The bill is being pushed by national payday lenders as a way to evade new federal regulations that protect consumers. Similar bills have already been rejected in several other states (Florida being the lone exception).

The payday loan industry markets its products as a solution to short-term financial problems. But the reality is much different. The Consumer Financial Protection Bureau reports that the typical payday customer is stuck in 10 loans per year – many customers take out far more – creating a long-term debt for vulnerable borrowers.

Current law allows payday loans of between $40 and $350, which have to be repaid within 60 days at annual interest rates that often exceed 400 percent. In Louisiana, 79 percent of all payday loans are issued to borrowers on the same day that they paid back a previous loan. Nearly nine in 10 payday customers (87 percent) take out a new loan within 14 days of paying back a previous loan.

Senate Bill 365 would expand this industry by allowing loans of between $500 and $850 for periods of 3 months to 12 months. These new products would be in addition to current payday loans – not a replacement, as the payday industry claims. The payday industry officials backing the bill claim it is needed because of a new rule from the CFPB that aims to stop the debt trap by requiring lenders to ensure that a loan is affordable, so it can be repaid without taking out another loan or defaulting on other expenses.

Got that? The bill would “expand” an industry which is set to lose, by CFPB’s own estimates, four fifths of its book of business.

They define “behaving responsibly” by charging no more than a 36 percent APR – which, again, for a two-week loan as is typical of payday loans, comes out to 1.38 percent. Which, by force of law, makes for better terms than any bank would give its best customers much less the type of people who borrow from payday lenders.

This whole attack on an industry providing a service people obviously find valuable is beyond obnoxious. On its face it’s literally insane – who are the Center for Responsible Lending and the Louisiana Budget Project to tell people who they can and can’t borrow from? And if they do win the day, does that somehow mean people won’t find a way to do short-term borrowing? Of course not, which is why this is so pernicious – once that hole in the market is made, not accounting for the Cosa Nostra or local dope dealer entering into the less-salutary side of the business Google will be there to fill it, if the government in the person of the Post Office or some other failing agency is not. You’d either have a private or public monopoly on short-term lending instead of a competitive marketplace like you have now.

Given how well the government performed via Fannie and Freddie in bringing on the housing collapse, we know how well it would work taking over the payday loan industry. As for Google, given their Big Brother-style presence in your life as is do you really want one of their tentacles to emerge as a monopoly in short-term lending? Think about that – who’s creepier than Google or the government when it comes to your private information, particularly your financial information in the event you should have the kind of money problems necessitating a payday loan? You OK with that?

If not, it might be a good idea to ignore the Budget Project and support Ward’s bill. At least in Louisiana there will be somebody other than the people who fired James Damore for noting men and women are different who can fill the consumer need in question. We’ll reiterate something we said back in 2014 when this fight first came up…

All of these people are pathetic hypocrites. They’ll scream and yell all day long about the immorality of a legal industry which services hundreds of thousands of adults who willingly engage them in business, but they won’t lift a finger to “help” those adults in their actual lives. They won’t pitch in and try to do it better; instead they want to play God and dictate who can do what. Or, said another way, they think it’s their business to deny their fellow citizens the freedom to contract, rather than affirmatively enter the market to offer a better alternative.

But if those things are in your wheelhouse, I’m not arrogant enough to tell you you shouldn’t be allowed to spend your time and money there.

And that’s the difference between me and the dime-store tyrants at Together Louisiana, the Louisiana Budget Project and the rest of the leftist scolds who probably can’t even explain what APR actually is. For those people, anything they like must be subsidized, if not required, by the government – and anything they don’t like must be banned.

This isn’t a difficult concept. It’s easy. The freedom to contract is a fundamental tenet of American liberty; it is what the Founders were talking about when they installed the pursuit of happiness along with life and liberty as fundamental rights enumerated in the Declaration of Independence. That the Soros gang couldn’t care less about fundamental American rights the Founders enumerated is hardly a surprise, but if so-called conservatives have trouble with it then maybe they oughtn’t be representing us at the legislature.