…and on Thursday we’ll find out if that funding mix can survive a vote of the full House.

The vote in committee was 17-6 for the budget, with one Republican voting against it – that being Bubba Chaney (R-Rayville), who can rarely be counted on to support his party’s position. Appropriations Committee chairman Cameron Henry cut a video yesterday afternoon highlighting the priorities…

Let’s remember that the budget Gov. John Bel Edwards sent to the House already contained most of the cuts the legacy media will howl about as HB1 moves through the legislative process – that budget was drawn up more or less as a bluff to create panic and soften the legislature up for tax increases.

But the majority on House Appropriations didn’t really take it as a bluff. They used it as a starting point and proceeded to add funding in places they prioritized given the additional revenue recognized by the Revenue Estimating Conference – which reduced the state’s “deficit” from $994 million to $648 million.

In truth, there is no deficit, at least not anymore. The state budget going to the House floor is balanced. It has an eight percent cut to the Louisiana Department of Health, to be sure – but let’s remember what that “cut” entails. Three years ago, LDH’s budget was $9.5 billion. It’s now over $12 billion. That it had risen to over $14 billion last year and was going to push $15 billion if Edwards had been successful in passing his full raft of tax increases should give you some indication as to how savage these “cuts” are.

So naturally the Advocate’s Elizabeth Crisp reported it this way…

The Appropriations panel rejected a proposal from Gov. John Bel Edwards, a Democrat, that would have put more funding toward broader higher education and health care priorities. As approved, HB1 calls for a $22 million cut to higher ed, compared to this year, and the Louisiana Department of Health’s budget would be slashed by $1.6 billion with the loss of significant federal funding linked to state dollars.

First, the use of TOPS as a funding mechanism for higher education should be defended, vociferously, by the state’s conservatives. TOPS is the vehicle for higher education funding we want – much more so than state general fund appropriations. With the general fund, it’s politics which governs how Louisiana’s public colleges and universities are paid for, and the little regional legislative delegations will horse-trade with the higher education bureaucrats until they can do the maximum amount to fund the regional jobs programs they see the state’s higher ed institutions as. That’s how we got to the current higher ed funding formula which makes sure LSU is underfunded compared to its peers while a host of small, poorly performing regional colleges stick around at a subsistence level insuring the employment of an adequate number of legislative constituents.

And that money, in Louisiana’s experience, is rarely used on behalf of the students. It’s used to build little public-sector empires. Which is why a state with only 4.6 million people, and a college-eligible student population far below the national average, has 14 four-year public colleges – most of which record atrocious six-year graduation rates and none of which score particularly highly with respect to their academic quality (LSU and Louisiana Tech can say they hold their own, but neither can claim to be true rivals of the “public ivy” institutions at Ann Arbor, Berkeley, Boulder or Austin).

So Louisiana’s experience with the Soviet funding model isn’t such a positive one, and what TOPS offers, among other things, is a way to fund those public colleges which relies on market forces. Though at some point it would be better to adjust the TOPS formula to weight its awards toward the higher end of the academic achievements of its applicants, TOPS generally operates on the principle that the better a high school student scores as to GPA and the ACT test the more his or her TOPS scholarship will be worth – which means the more of the state’s higher education funding mix comes from TOPS the more funding for those colleges will derive from the attraction of top-quality academic achievers.

And the benefits of that, for the winners, involve higher graduation rates, more successful alumni, more ease in attracting good faculty and higher prestige. For the losers, what likely results is being shut down – something the state actually needs, since 14 public colleges is too many in an age where online degrees are more common and the entire higher education industry is becoming a bubble of student debt ready to burst. With Louisiana’s community and technical college graduates earning more money upon graduation than most of the graduates of those regional universities do, it’s worth noting that perhaps more of the state’s current four-year students should be going the cheaper two-year route.

That’s why Appropriations found $22 million in cuts to higher ed through the regular general fund and yet fully funded TOPS. They’re making a policy decision here which embraces the market at the expense of the Soviet model. That’s a decision Edwards and his staff will attack, and it’s a matter of time before they’ll enlist the university presidents and others to castigate Henry and his committee for doing what they did yesterday.

Our second observation involves this concept of the “loss” of federal dollars because the state is failing to match the funding for them. This plays heavily into the debate over cuts to the Louisiana Department of Health, because most of its budget comes from federal dollars for Medicaid – and of course, with half a million Medicaid recipients added to the rolls under Edwards’ Medicaid expansion, that’s the primary source of the massive budget increases House Appropriations is rolling back.

If you talk to bureaucrats at the state level and politicians on the left side of the political aisle, they will bemoan the loss of any federal dollars as a “cost” to the state’s budget – and they will do so without regard for what strings those federal dollars carry with them. This is how you get bizarre results like the Jim Richardson/LSU College of Business study last week claiming that the Medicaid expansion has been a major boon to Louisiana’s economy, despite the fact Louisiana was the only Southern state to lose jobs last year on net – obviously Medicaid expansion can’t be much of an economic savior given the overall result.

Left unsaid by this narrative is the fact that those federal matching funds require the state to lay out funding in its own right – and when the purpose for this funding is not effective in solving anything, the real cost is in state dollars thrown away in pursuit of federal dollars to also be thrown away.

Even at $12 billion, Louisiana is still spending far above the Southern average in per capita health care spending. Here’s a graph from the Kaiser Family Foundation based on 2014 numbers – and remember, the 2014 numbers are from the Bobby Jindal era, when Louisiana’s hospitals were left for dead and the state’s health care infrastructure was supposedly in crisis… 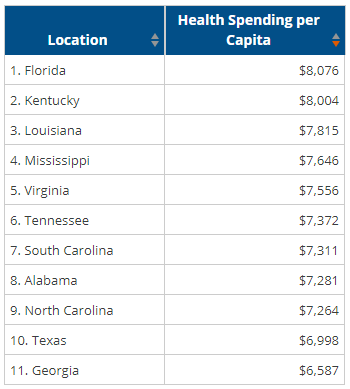 The per capita number is considerably higher now – even with this mythical $1.6 billion “cut” House Appropriations just passed. It’s worth asking why Louisianans are supposedly so much harder to provide health care to than Texans, Georgians or even Mississippians, and given the state’s low ranking with respect to health care outcomes it’s also worth asking whether that $1.6 billion difference between what Louisiana has to spend on public sector health care and what Edwards and his allies demand doesn’t just involve waste, fraud and abuse.

Going forward, the vote on Thursday will be an interesting test for Louisiana’s legislative independence. Edwards will have all, or virtually all, of the House Democrats voting against Henry’s budget. We’ll see how many of the Republicans the governor can corral behind amendments to put funding back into LDH. The initial bet here is that with only Chaney voting against the budget in committee (and independent Dee Richard), the budget can get to 53 votes without major amendment – though we wouldn’t bet the farm on that.

The real fun would come in the Senate, because it’s a virtually sure thing the House’s budget will be torn up once it goes to the Senate Finance Committee and a budget which looks a lot more like the one Edwards wants will be written in its place. That won’t be very popular in the House, and the controversy will come down to how unbalanced the budget will be at the end of this regular session.

Because Edwards and his allies in the Senate won’t want to pass a balanced budget like the one which came out of House Appropriations yesterday. They want a shortfall, so they can have a special session to pass tax increases to fill it. That’s always been the game in the Louisiana legislature, and it will be the game this year. The question will be whose will is stronger. Typically it’s been the Senate winning these battles, though less and less decisively in recent years.

But as of today, the House Appropriations Committee has passed a budget which is balanced without raising taxes. Edwards says that budget isn’t worth the paper it’s printed on. And the battle is underway.

Interested in more news from Louisiana? We've got you covered! See More Louisiana News
Previous Article Russia Launches New Cyber Attacks Against US, Allies
Next Article JACOBS: Why The Medicaid Expansion Is A Drain On Louisiana’s Economy