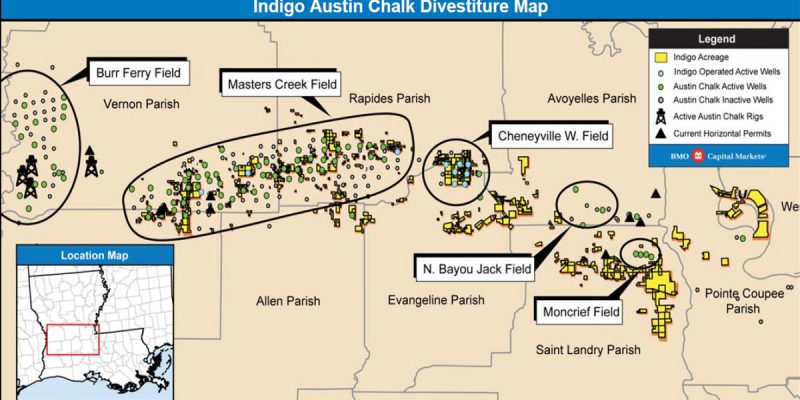 A few weeks ago, LOGA President Don Briggs posted here at The Hayride about the presence of a nascent shale oil play in the central part of Louisiana called the Austin Chalk…

Between the oil-and-gas-barren lands of south Louisiana and the epicenter of activity in north Louisiana, there is new life. It has been over 20 years since the Austin Chalk has seen any leasing activity, but that all has changed. It is estimated that over 400,000 acres are leased up in the hottest area of the Chalk.

So what is the Austin Chalk?

The Austin Chalk formation stretches from the Sabine River at the Louisiana Texas border, tracking south east across Louisiana and eventually to the Gulf. The chalk lies between 800 to 1,200 feet above the Tuscaloosa Marine Shale and mirrors a similar path as the shale formation. This layering of formations can provide a producer with a possible multilayer play.

In 1996, the Austin Chalk was a driver of economic, infrastructure development and a source of much drilling in Louisiana. It is too early to tell if this formation will be the hot Louisiana chalk play it once was, or will rival the great Eagle Ford Shale, but it seems that there is a reason for optimism for Louisiana’s future.

Briggs wrote that in late February. At the time there was only one major player who had been doing large-scale oil leases in the area of the Austin Chalk – EOG Resources, which has issued leases for well over 200,000 acres on the eastern side of the play in southeastern Avoyelles Parish and northern St. Landry Parish (that’s an area called the North Bayou Jack field). EOG has a fairly bullish view of the Austin Chalk…

The Austin Chalk formation, which sits right on top of the Eagle Ford formation, was a hot play in the mid-1900s, mid-1970s and 1990s. However, it was all but forgotten during the shale boom when the Eagle Ford formation took front and center. With the majority of shale plays still on the shelf, the Austin Chalk is back on the radar and stronger than ever, proving a prominent contender in the ever-growing oilfield category.

“Discussing the Austin Chalk again is very much a surprise to us,” said William R. Thomas, chairman and CEO of EOG Resources, Inc., during a recent energy conference.

EOG is one of the largest operators in both the Eagle Ford and Austin Chalk plays.

“We, probably like the rest of the industry, had kind of written off the Austin Chalk,” Thomas said. “But we have discovered a new geologic concept in an existing play in the Eagle Ford. Our team has cracked the code on how to make our particular footprint in the Austin Chalk – a top-tier horizontal play, earning returns on par with the Eagle Ford, Permian and Bakken plays.”

Two of EOG’s wells, the Leonard AC Unit 101H and the Denali Unit 101H, produced an average of 2,175 and 3,130 barrels of oil equivalent per day over 30-day and 20-day periods, respectively. Its Kilimanjaro 101H well produced 675,000 barrels of oil and 1.2 billion cubic feet of gas in just nine months. The wells are located in the Giddings Field – the largest field in the Austin Chalk – in southeast Texas.

Noting that other operators have wells in the Austin Chalk that have produced 300,000 to 400,000 barrels of oil in their first years, David W. Trice, EOG executive vice president of Exploration & Production, called the discoveries “substantial.” “Based on the data we have, we think they are repeatable,” he said in a statement to stakeholders last year.

Well, EOG is getting some company from another major player. This development hit yesterday…

ConocoPhillips, the largest U.S. shale driller, announced Tuesday plans to sell of some of its acreage in Texas and expand its operations in Louisiana and Canada.

The company is working to sell about $250 million in assets, including several small holdings in the Permian Basin in West Texas and parcels of mostly undeveloped land in South Texas. The Permian sales closed during the first quarter, and the South Texas transactions are expected to close by the end of the second quarter.

The acquisition follows ConocoPhillips’ February purchase of about 245,000 acres, mostly in the Austin Chalk basin in central Louisiana. The company said it plans to drill several exploration wells there this year.

When ConocoPhillips gets involved in a shale play, that shale play is a real thing.

We’re told that the Austin Chalk is likely going to have a fairly slow rollout in Louisiana, starting on the eastern side of the play in and around that North Bayou Jack field. EOG has drilled a few test wells in that area and late this year expects to drill a few real ones, while ConocoPhillips’ participation will go more slowly.

It may be years before the full effect of Austin Chalk on Avoyelles, St. Landry and Pointe Coupee Parishes – not to mention the other potentially hot areas of the play, like southern Rapides Parish and into Vernon Parish – is felt. It’s unrealistic to expect any wholesale exploration activity in the state until the oil and gas industry believes Louisiana’s politicians and lawyers won’t descend on them with lawsuits and predatory regulation and taxes, which would necessitate a sea change from the current environment.

But ConocoPhillips’ news indicates there might be the thought that Louisiana’s political and economic winds could be changing, at least in the intermediate term. Let’s hope they know something most of the rest of us don’t, because the central part of the state is desperate for some semblance of an economic growth driver. The Alexandria metropolitan area, after all, lost jobs at a minus-one percent rate last year.

Interested in more news from Louisiana? We've got you covered! See More Louisiana News
Previous Article Maybe Denise Marcelle Ought To Run For District Attorney In Baton Rouge…
Next Article It Happened: What Is Hillary Clinton Complaining About Now?