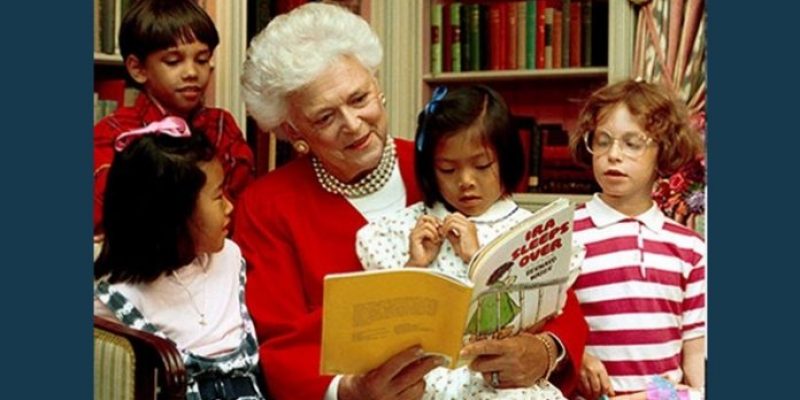 In a remarkable turn of events, the mainstream media is glorifying a First Lady it never consistently held in esteem. Listening to mourners and family members laud the Bush matriarch’s kindness was nauseating. Doesn’t anyone remember what Barbara Bush said about Donald Trump? President Trump was right to not attend her funeral, especially after the shameful manner in which the Bushes treated him and his family. Is it any wonder that a self-made billionaire would be criticized by a prideful and elitist New England family who believe they are entitled to have three members of their family be president of the United States?

Did she or the Bushes ever apologize to Trump? Nope. Instead, George W. Bush publicly states his opposition to Trump policies, breaking away from the tradition of former presidents not commenting on current presidential policy.

Is it kind to support killing children? Have Barbara Bush supporters completely forgotten that she always supported Planned Parenthood, population control, and “family planning”? She promoted early childhood learning and literacy, but what about her support for killing children?

Have Barbara Bush supporters forgotten her efforts to try and exclude abortion from the Republican Party Platform? In August 1992, the Republican Party was debating whether or not to advocate for a Constitutional amendment that would mandate a “fundamental individual right to life” for “the unborn child” in its party platform. Barbara Bush told reporters that she disagreed with this, in a rare move speaking publicly about her personal political position. “I’m not being outspoken or pro or con abortion,” she told The New York Times. “I’m saying abortion should not be in there, either pro or con.” As a “personal thing,” she explained, the issue had no place in party platforms or conventions.

Seriously? Killing children is a personal decision and murder isn’t a political issue?

George H.W. Bush and Barbara Bush openly supported Planned Parenthood– even when Texas elected him into Congress in 1967.

Have Christians forgotten that condoms were first introduced into public schools under the Bush presidency? There is a reason why– the Bushes supported the use of birth control, so much so that Bush Sr.’s nickname in congress was “Rubbers.” The couple were both influenced by his father, Prescott Bush, who was the treasurer of Planned Parenthood when it launched its first fundraising campaign in 1947. In Congress, H.W. Bush supported Title X—a federally-funded family planning program—and the United Nations Population Fund—designed to prevent overpopulation in the Third World. Their granddaughter, the matriarch’s namesake, Barbara Pierce Bush, is only following in their footsteps by continuing to openly support Planned Parenthood and running an organization designed to curtain population control in the poorest regions of the world.

She, like her grandfather, went to Yale where the ideology of eugenics was first championed. Advocating for the culling of the lower classes, the weaker races, and the poorest people in the world, Yale actively promoted birth control as the scientific process of the survival of the fittest. Eugenics first materialized in the advocacy of birth control that targeted the over-populated ghettos of the inner city overrun by immigrants and minorities. Later, by promoting abortion. It is a public service to reduce the population, which is why Planned Parenthood locations are primarily found in the poorest neighborhoods.

The Bushes represent the Blue Bloods of the Northeast more than they ever will salt-of-the-earth Texans. A carpetbagger from New York, Barbara Bush may have promoted childhood literacy efforts– but only to children that had escaped the death trap of Planned Parenthood, an organization she championed long before anything else.