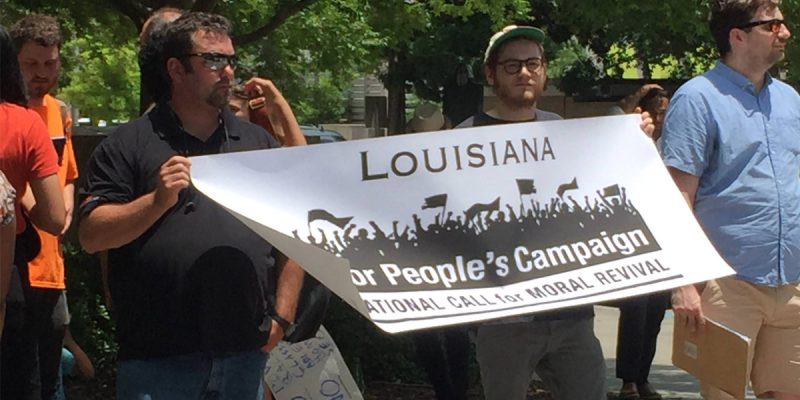 There was something of a minor disturbance in downtown Baton Rouge today, as an organization called the “Poor People’s Campaign” set up a demonstration at 4th Street and North Street to complain about the state budget and to demand a budget that “remembers poor people.”

As though a $3 billion increase in the outlay for Medicaid forgets poor people. Louisiana has the most generous Medicaid program in the South, if not the nation, and somehow these layabouts think the state government pinata doesn’t have enough candy in it.

And we have video of the arrests…

HAPPENING NOW: Protesters are being taken away in restraints at the intersection of North and Fourth. Traffic moving again. pic.twitter.com/lmyFxOanYr

These were people complaining about the treatment of the poor by protesting in the middle of the day on a Monday.

Meanwhile the people not protesting and not poor were doing something else in the middle of the day on a Monday – namely, working a job. Which is positively the best possible way to insure that one is not negatively affected by the state budget’s treatment of the poor.

What is all this? It’s a deliverable. There’s a website for the Poor People’s Campaign, and there you’ll learn that “A National Call for Moral Revival is uniting tens of thousands of people across
the country to challenge the evils of systemic racism, poverty, the war economy, ecological devastation and the nation’s distorted morality.”

There weren’t tens of thousands of people protesting in Baton Rouge today. There were tens of people. And most of them didn’t look poor – they looked like the union sent them there.

Or else they took off work at Starbucks.

Nationally, this campaign is being put on by Union Theological Seminary, which is a leftist “liberation theology” indoctrination camp disguised as a religious school. What’s almost certainly behind this is left-wing foundation grant money which is being distributed to community organizers in search of a justification for a paycheck. Getting eight morons arrested for being out in the middle of the street blocking traffic, which is what happened on the corner of North Street and 4th Street in Baton Rouge today, is enough to get this small gaggle of people some local news coverage and therefore check a box in order to get paid.

And that’s how left-wing advocacy works.

The question is whether you hear of this protest again. If it qualifies as successful, you’ll hear some Democrat from the Louisiana legislature, or perhaps even the governor when he gives his speech in Lafayette tomorrow, reference the protest in claiming that the public is on board with higher taxes so as to Take Care Of The Poors. But since these people showed up last week to gripe about the Senate passing the budget John Bel Edwards vetoed on Friday and nobody seemed to care, the guess is this group won’t get any official recognition.

Because 50 people standing out in the middle of the street who can’t even spout the mindless chants the paid organizers are trying to gin them up for just isn’t likely to qualify as a hit. As a deliverable, this was a poor show. Thumbs down.