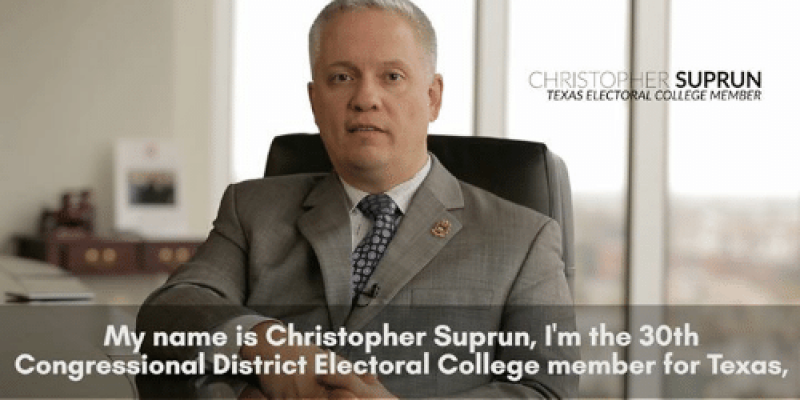 Christopher Suprun, a Texas Electoral College member who refused to vote for Donald Trump for president, is one of nine candidates running to fill the vacated seat by former Congressman Blake Farenthold. Farenthold resigned after a sex scandal became public right before the House Ethics Committee was about to rule on his misconduct. He has yet to repay the U.S. Treasury Department $84,000 of taxpayer money used to settle the claim.

Suprun is an independent who lives in Dallas, an area nowhere near the Coastal Bend-based 27th Congressional District of Texas. He made national headlines after Trump won the election when he wrote in a New York Times op-ed that he wouldn’t vote for Trump as a member of the Electoral College.

In it he claimed: “Fifteen years ago, as a firefighter, I was part of the response to the Sept. 11 attacks against our nation.”

But the local Dallas television station WFAA looked into his claim, reporting that no records could be found to support it.

According to USA Today, Suprun told the news network that he volunteered for the volunteer fire department in Dale City, Virginia, near Washington, D.C. However, there are no records to prove his claim.

USA Today contacted the Dale City department, and discovered a December 16, 2016 Facebook post that stated, “Suprun was an active member in good standing” on 9/11. However, the department also stated that no firefighters were on duty from 6 a.m. to 6 p.m. on Sept. 11.

Suprun told USA Today, “Let’s put it this way. I’m not sure how to prove I was somewhere doing what I was supposed to be doing because I didn’t take a selfie.”

On Suprun’s campaign website he reiterates his dislike for Trump:

“In December 2016, I warned America that Donald Trump would be a burden to us as President. Like others who had been involved in politics, it was clear that he did not have the temperament or judgment to serve in that capacity.”

Suprun is a paramedic. He has zero political experience.

After the May 22 runoff election the winners will be added to the November 6 ballot. Whoever wins will serve a two-year term beginning in January 2019.