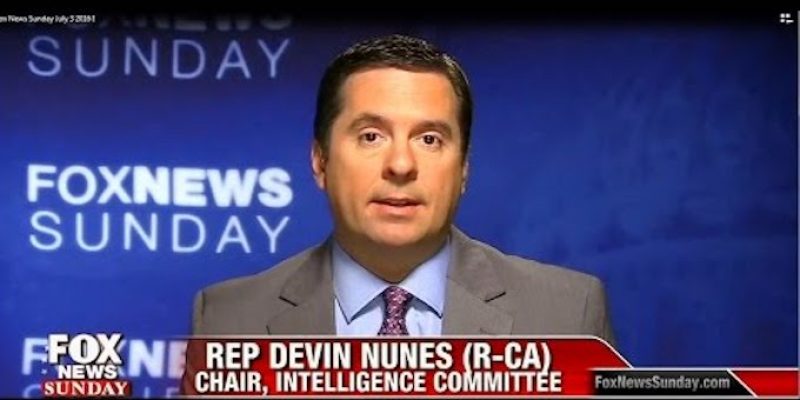 The House Permanent Select Committee on Intelligence Chairman, Rep. Devin Nunes (R-CA), is seeking to hold in contempt Attorney General Jeff Sessions for not complying with a subpoena.

Nunes sent a letter to the Justice Department requesting classified information for the committee’s investigation into abuses of the Foreign Intelligence Surveillance Act and counterintelligence inquiries, specifically the targeting of former Trump campaign official Carter Page. The Justice Department ignored the letter and will not comply with the subpoena.

Nunes told Fox News on Sunday: “We have to move quickly to hold the attorney general of the United States in contempt, and that’s what I want to press for this week.”

Nunes has to go to court to enforce the committee’s subpoena.

In a letter sent to Nunes signed by the Assistant Attorney General Stephen E. Boyd, the Justice Department stated that it would not comply with a request for information about a specific person, after conferring with the Office of the Director of National Intelligence, the White House and the FBI, who had all evaluated the committee’s request. It states: “Disclosure of responsive information to such requests can risk severe consequences, including potential loss of human lives, damage to relationships with valued international partners, compromise of ongoing criminal investigations, and interference with intelligence activities.”

Nunes said their reply isn’t good enough. Handing over the information has nothing to do with “national security.” He argued:

“How many times have we heard that argument? This just can’t continue where we don’t get information in a timely manner.”

President Trump has expressed disappointment that the Attorney General Sessions recused himself from the Russia investigation and didn’t really pursue reviewing the inquiry into Hillary Clinton’s use of a private email server. Trump tweeted last week:

“A Rigged System – They don’t want to turn over Documents to Congress. What are they afraid of? Why so much redacting? Why such unequal “justice?” At some point I will have no choice but to use the powers granted to the Presidency and get involved!”

Congress recently voted to hold two appointed officials in contempt. Lois G. Lerner, the former Internal Revenue Service executive, was held in contempt in 2014 after targeting conservative tea party groups. Two years prior, Attorney General Eric H. Holder Jr. was held in contempt for not complying with the investigation into the Obama debacle of “Fast and Furious”, and operation of gun trafficking across the border. More than 1,000 guns went missing; two were found at a crime scene where one Border Patrol agent was killed.

Eric Holder, who was tasked with covering up the debacle, was the first time a sitting attorney general in U.S. history to be held in contempt of Congress.

Of course, Obama’s Justice Department (run by Holder) declined to prosecute him.

Interested in more national news? We've got you covered! See More National News
Previous Article Dallas paramedic running for Congress can’t prove claim that he was a 9/11 Responder
Next Article SICK: School mural depicts Trump’s severed head on top of spear, no one has been fired