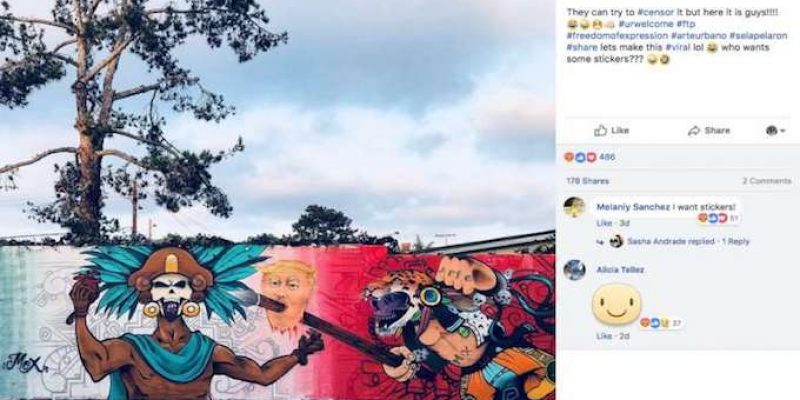 Why the principal of this Chula Vista MAAC Community Charter School in the Sweetwater Union High School District hasn’t been fired remains a mystery.

A mural was displayed on the school’s wall of a bloody, severed head of President Donald Trump spiked on top of a spear. When people complained. They covered it up. They didn’t remove it. Instead, they issued a statement stating the artist would alter the painting.

By attaching the body to the beheaded head of Donald Trump?

What is wrong with these people?

This is a school– with minors– who should not be exposed to any beheading– let alone the President of the United States.

Worse still– the mural was painted for an annual scholarship fundraiser.

A director at the school said in a statement:

The fundraiser was supposed to highlight “urban art” and invited students and artists to paint murals portraying this theme.

So the them of urban art in California now is beheadings? Was the artist or student a Muslim?

According to the San Diego Tribune, the nonprofit that oversees the school is “looking into questions raised about the mural, including whether anyone knew of its content before it was painted and when school officials first became aware of it.”

Again, what did the school do? Nothing. They covered the mural with black plastic, then plywood, then a vehicle.

The San Diego County District Attorney should prosecute the artist Sasha Andrade and the school for inciting violence and committing a hate crime.

The mural, and the artist’s mind who created it, is sick.

It depicts warriors: one is holding a human heart; one is wearing a leopard headdress holding a spear with the severed head of Trump spiked on top of it protruding from the warrior’s mouth. 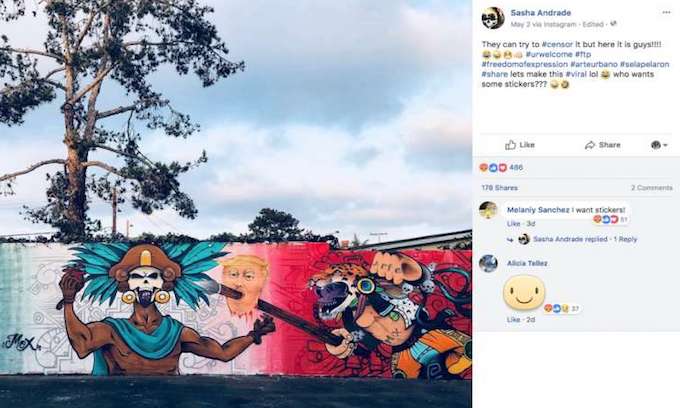 Andrade is reportedly defiant and proud of her work, posting images of it on Facebook. She wrote on May 2: “They can try to #censor it but here it is guys!!!! ” Hashtags in the message included “#urwelcome” “#freedomofexpression.”

Andrade does not understand that hate speech and hate crimes are not protected speech under the First Amendment. Her school obviously did not teach her about the Constitution or about civics.

Her mural can also be considered a credible threat, and she can (and should be) investigated by Secret Service.

Taxpayers, parents, and students should be boycotting and pulling their children out of the Sweetwater Union High School District.

Roughly 300 students aged 14-24 are enrolled in through the Sweetwater Union High School District. The school in question was founded in 2001 by MAAC (Metropolitan Area Advisory Committee) on Anti-Poverty of San Diego County, Inc.

“Our school has a focus on critical thinking; our students learn their academic curriculum by examining current issues,” read the statement issued by the school. “We expect that this, and other murals, will give cause for conversation among our student population and are ready to help them reflect on it and formulate their own opinions about its message and implications.”

Again, whoever issued this statement should be fired.

Critical thinking does not including supporting hate speech or hate crimes.

It most certainly does not include advocating beheadings, unless of course they are teaching Islam.