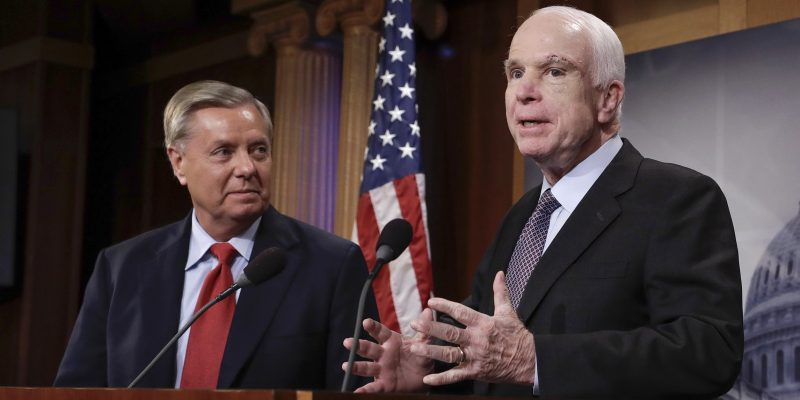 US Senator Lindsey Graham (R-SC) said in a Sunday interview on CBS that the White House should apologize over an aide’s comment about Sen. John McCain (R-AZ).

Graham told the “Face The Nation” host that he is unsatisfied at how the White House has reacted to the comment:

“It’s a pretty disgusting thing to say. If it was a joke, it was a terrible joke. I just wish somebody from the White House would tell the country that was inappropriate, that’s not who we are in the Trump administration.”

Meghan McCain, the outspoken daughter who endorsed Hillary Clinton for

The comment in question was made my White House special advisor Kelly Sadler who in an private meeting quipped, “He’s dying anyway” in response to the Arizona Senator’s opposition to President Trump’s nominee to the CIA, Gina Haspel. The Hayride covered McCain’s recent opposition to that appointment here.

Senator Graham expressed his disappointment with the administration’s silence over the comment before saying:

“Most Americans would like to see the Trump administration do better in situations like this… It doesn’t hurt you at all to do the right thing and to be big. If somebody in my office said such a thing about somebody, I would apologize on behalf of the office.”

Graham’s outspoken defense of Senator McCain comes as no surprise as the two are among the closest of friends in the entire US Senate. In fact, Senator Graham was one of the select individuals to spend time with McCain during his ongoing final days at his ranch in Arizona where the duo spent two days together. Both of the Senators were reluctant supporters of then-candidate Trump in 2016.

White House Press Secretary Sarah Huckabee Sanders refused to comment on the “leak” but referred to the quote as a “bad joke” and reportedly scolded White House staff, calling the remark “unacceptable”. Reports indicate that Sanders was more concerned with the leak than the comment itself.