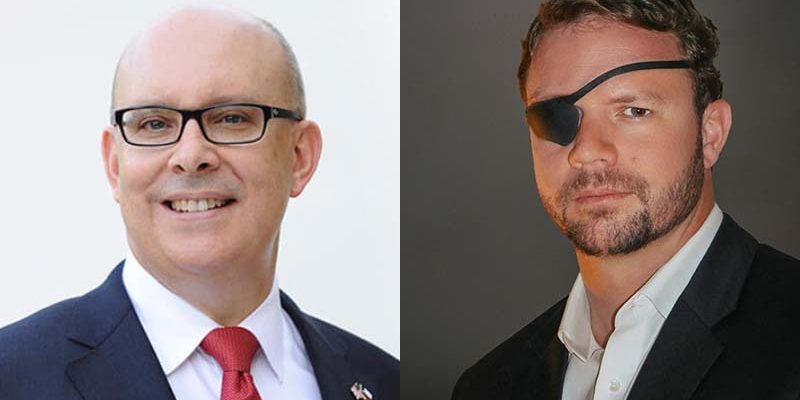 Houston, Texas – What was a cordial primary has turned into a dirty runoff with Roberts likening his fellow Republican opponent, Crenshaw to Barack Obama and Bernie Sanders.

In the race to replace retiring conservative stalwart Ted Poe, the retired Navy SEAL was an unlikely runoff contender. Crenshaw shocked the political establishment by securing a runoff spot by beating the most well-funded candidate by less than 200 votes. State Representative Kevin Roberts received the most primary votes with 33% to Crenshaw’s 27%.

Unfortunately, and as often happens in politics, the runoff has gotten dirty with Roberts accusing Crenshaw of not having “real world experience”. The retired Lt. Commander took offense to that statement, accusing the State Rep. of demeaning his military record and that of other veterans.

Additionally, the Roberts campaign sent out a distasteful attack mailer depicting Dan Crenshaw side by side with former President Barack Obama and self-proclaimed socialist Senator Bernie Sanders. Former Lt. Governor David Dewhurst effectively came out of retirement to endorse Crenshaw, he had the following to say via Twitter:

Has Kevin Roberts no shame sending me a mailer likening Crenshaw to @SenSanders & @BarackObama, saying brave Americans who serve in the U.S. military have no real life experience? As a conservative veteran, I proudly endorse @DanCrenshawTX for U.S. Congress District 2. #VoteEarly

The momentum appears to be on Crenshaw’s side and has been so since the final days of the primary when his campaign increased their cut of the vote in every stage of voting from absentee voting, to early voting, to election day.

That considered, the attacks from Roberts are no surprise as they are an act of desperation but someone should have advised him that attacking a war hero would only make matters worse.