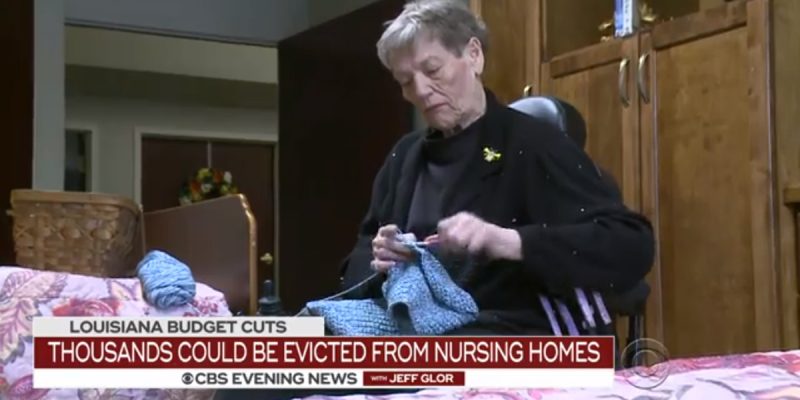 For years Rush Limbaugh has characterized the legacy media as the “drive-by media,” a reference to shallow coverage of events with no follow through and an almost complete failure to tell the whole story. Limbaugh’s judgement is that news reporting on events is quite a bit like a drive-by shooting – after the deed is done the perpetrator is long gone from the suffering at the scene of the crime.

And “drive-by” is a pretty good description of the CBS News report on John Bel Edwards’ eviction notice idiocy which aired last night – a two minute segment mostly taken up with the sad story of an octogenarian polio survivor faced with the prospect of being packed off for parts unknown because of state budget cuts, interspersed with former Republican House Speaker and current nursing home executive Jim Tucker exclaiming that the notices would “literally kill” his patients.

1: No elderly residents are going to be evicted and the governor knows it.
2: This is a reckless political scare tactic by this administration to pressure us into raising taxes before the process is half way over.
3: Even if the governor decides to prioritize Medicaid expansion (we’re almost to 40% of our residents on Medicaid) over seniors, it would have to be approved by the federal government, which could take months and isn’t going to happen – and they haven’t even started the process.

The report does note that the feds, in the person of CMS, would have to approve those evictions. That came in the final 10 seconds of a two minute segment playing up how the budget cuts were going to kill old people.

We all know none of this is going to happen. It’s obvious it’s a dirty trick on the part of the governor, done for the precise reason that he can call down CBS News, like a trained seal, to put on a show for a national audience. Which is exactly what CBS did for him yesterday.

It’s enough to make one wonder if a recall effort against Edwards isn’t a good idea. Obviously a recall is a near-impossible thing to do, and to do it less than 18 months before he comes up for election anyway is something of a waste of time. But if we’re into political stunts in Louisiana, and clearly we are, that’s a high-profile one – and what’s good about a recall is it’s a bit like the space program in that a recall spins off lots of side benefits. You don’t get Tang, for example, but you do identify people who become experienced campaign workers, and you identify passionate voters who believe in a certain way and can be motivated to get out and vote for candidates friendly to those beliefs. Not to mention you get to throw mud all over a governor who richly deserves it and won’t get that experience from the drive-by media.