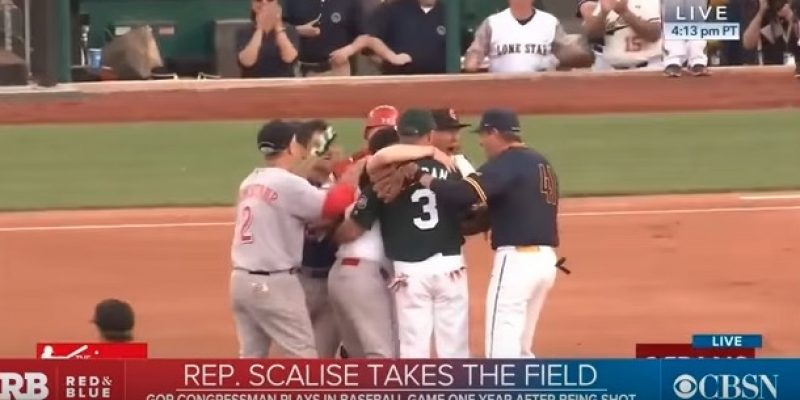 Last night at the annual Congressional Baseball Game for Charity, Majority Whip Steve Scalise returned to Second Base to where he was shot one year ago by a deranged shooter who opened fire on Republican players.

“Steve is a fighter. He is a man of great courage,” said Rep. Chuck Fleischmann, R-Tennessee. “I knew Steve would be back, but to see him starting tonight was inspirational.”

The first pitch was hit directly to Scalise and although he’ll never be able to walk again without a limp, the Louisiana Republican made the play and made the first out by throwing to First Base. Scalise was mobbed by everyone on the infield with hugs and cheers.

Scalise underwent nine surgeries over the last year and missed months of work in Congress. Several of the doctors at George Washington Hospital didn’t think he would make it through the night. In the days after he was shot, doctors said he was incredibly lucky to survive.
“To see him back here and to start and play was great,” said Rep. Nanette Diaz Barragan, D-California. “We can’t forget what happened and not have this just be one night of coming together, but to renew this conversation and continue the camaraderie that is built through baseball.”

The game is a long-standing tradition that raises money for a number of charities. Last year the game raised $1.5 million. This year, a portion of the proceeds will go to the United States Capitol Police Memorial Fund in gratitude to the officers who  defended lawmakers last year. Were it not for Scalise’s security detail, Officers David Bailey and Crystal Griner, the shooting may have been much worse.

Scalise recalled what happened after he was shot and he lost the energy to crawl away from the direction of the shooter. He said on Fox News’ Fox & Friends, “I just started crawling, you know and then my arms gave out and couldn’t do anything at that point, so just started to pray and said a lot of prayers and through the grace of God and the marvels of medicine, I’m here.”

Scalise wore a Capitol Police hat to pay tribute to people who saved his life and many others’ lives. He said, “if David and Crystal didn’t literally risk their lives while being shot at, none of us would be here today; I wouldn’t as well as all my Republican colleagues that were on that ball field.”

Scalise told Fox News, “You know just the prayers, the warmth of people all across the country.  Back home in my district in southeast Louisiana, the prayer vigils that people held, but then to hear stories from my colleagues around the country of people that were praying for me that I don’t even know.  That really lifts you up, I got a chance to speak with President Trump yesterday, we talked a little bit about this and he was wonderful throughout the whole thing, just you know coming to the hospital, calling to check on me.”

The Democrats beat the Republicans 21 to 5.

Interested in more national news? We've got you covered! See More National News
Previous Article The Eddie Jordan Fiasco Might Be The Stupid-Criminal Moment Of The Year
Next Article Black Unemployment at Lowest Level Since 1972 thanks to Trump [video]