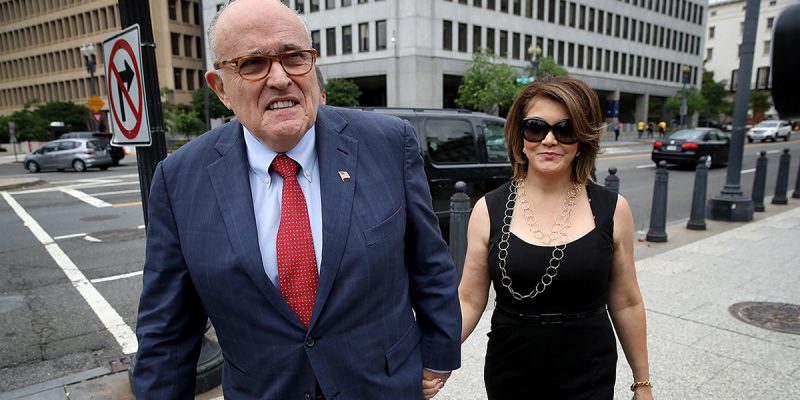 Our readers might have noticed the mini kerfuffle that the political media has spun up over the fundraising event former New York mayor and current Trump attorney Rudy Giuliani is headlining in Lafayette next week on behalf of congressional candidate Josh Guillory. POLITICO had a story on it yesterday…

In a move that blindsided the West Wing and sent Hill Republicans into a tizzy, the president’s personal attorney is throwing his support behind an obscure House candidate in Louisiana trying to take out incumbent GOP Rep. Clay Higgins. But the bizarre tale of Giuliani’s interest in an off-the-radar congressional race only begins there.

It turns out the ex-New York mayor’s new girlfriend, GOP fundraiser Jennifer LeBlanc, is working for the Republican challenger in the race, Josh Guillory. LeBlanc had been on Higgins’ payroll until late last year when she abruptly parted ways with the congressman.

“We have a National Enquirer-type situation going on down in Louisiana’s 3rd Congressional District,” said state Attorney General Jeff Landry, a Higgins backer who hails from the area.
Giuliani’s involvement, Landry added, is “ridiculous.”

The former mayor’s foray into the race has infuriated senior party officials, who are convinced Giuliani is acting at his girlfriend’s behest. At a time when the president is aggressively working to sway GOP primaries in conservative areas where he’s popular, Republican leaders worry that Giuliani will give Guillory the imprimatur of Trump’s blessing, even though the president hasn’t endorsed in the race. The president remains highly popular in the Lafayette-area district: An internal poll conducted by the Guillory campaign this spring found Trump’s approval at over 64 percent.

“I just think this is not the proper place for him to come down and challenge an existing congressman,” said Charlie Buckels, a longtime Republican activist in Louisiana and member of the state party finance committee. “It seems quite odd to me, and I’m just disappointed.”

It turns out Jennifer LeBlanc is a friend of ours over at The Hayride, and here was the statement she gave us…

This will be the only comment I make on my relationship with the two GOP candidates in this race , and any interaction that has to do with my personal life , at this time.

To be certain, I ended work with Congressman Higgins, and later began work with Josh Guillory, well before I began spending part of my social life with Mayor Rudy Giuliani. These three decisions in my life were made for very different reasons, and are independent of each other. When I began supporting Josh Guillory, it was because I believed he brought a valuable perspective for GOP voters to consider in this race . I want as many people as possible to hear what he has to say and then make an informed decision.

My professional relationship with Mayor Giuliani began in 2007 when I served as his finance chairman for LA during his Presidential bid, and the Mayor’s appearance in the district was one way of helping Josh connect with voters. Like many of my friends around the state and around country, he was happy to come down and lend his support to help Josh . At such a critical point in our nation’s history, our voters deserve to have more than one GOP view point when considering their representation in Washington.

Some perspective here – LeBlanc did fundraising for Higgins back in 2016, and for whatever reason that relationship went sour. She does fundraising for lots of political candidates – her main client is Agriculture Commissioner Mike Strain, for example. Guillory is an attorney in Lafayette who, we understand, is relatively well connected with the social set there, and that’s a group among which LeBlanc has lots of contacts, so it’s not a major surprise that she would end up on his team.

Nor is it a surprise that LeBlanc, who has appeared in a number of high-profile social events with Giuliani and has some sort of personal relationship brewing with the former mayor beyond the business contact they’ve had for a decade, the extent of which is none of our business, would be able to reel Giuliani in for a fundraising event for her client. That’s the kind of thing a good fundraising consultant with connections can do for her political client.

Nothing here is out of the ordinary. Including the negative reaction to Giuliani’s appearance by the folks who support Higgins, like for example Scalise and Landry, who would rather not see an internecine Republican fight in a congressional race this fall when Louisiana appears to be a nice, quiet place amid what nationally looks like a highly contentious midterm election. And also including the state GOP, which finds itself caught in the middle between supporting an incumbent in Higgins whose time in Congress can best be described as a pleasant surprise so far – but also not wanting to come down unnecessarily on a candidate who might be worth supporting in a different race, or even this one.

At the end of the day, at this point in that LA-03 race, there is little reason to believe much of a war is coming. Guillory certainly scored a nice attention-getter with Giuliani’s appearance on his behalf Monday, but whether that moves the needle much remains to be seen. Higgins is still a colossal favorite in the race, but Guillory might turn into a candidate worthy of regard in the 2019 legislative races as he gains some seasoning (he might want to avoid doing interviews with Lamar White in the future if he wants to gain credibility among conservatives, however).