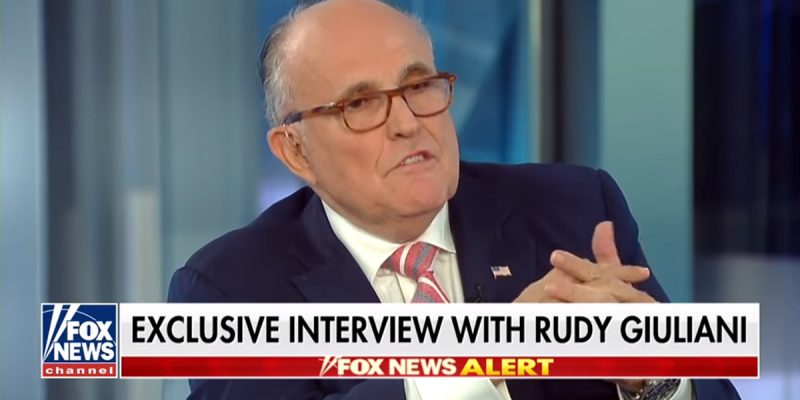 From a message going out to Republican donors in Lafayette today…

One hour Roundtable vip with photo and priority reserved seating at luncheon is $2700. If already maxed for primary and general ($5400 pp), then a runoff max of $2700 will be collected and escrowed. VIP photo with luncheon reserved seating is $1000 pp. 3rd tier: Luncheon with guest speaker Rudy Giuliani, general seating is $500pp.

Mon June 25. Petroleum Club of Lafayette, beginning with roundtable at 9:15 am. Official email to follow soon.

EDIT: We’re told an official endorsement is not actually in the offing, but effectively it doesn’t appear as though there’s much difference.

That’s a pretty high-end fundraiser for a first-time candidate nobody has given much shot of knocking out the popular Higgins, though it isn’t all that surprising a price for something Giuliani is involved with.

So who is Josh Guillory? Here’s his bio from his website…

“The greatest threat to our Constitution is our own ignorance of it.”  – Jacob Roecker

It is these 12 words that have prompted Josh Guillory to announce his candidacy for Congress in the 3rd District of Louisiana. A respected Constitutional and Family Law attorney from Lafayette, LA and a lifelong Republican, Josh is running to bring common sense, conservative values to Washington.   A fiscal conservative, Josh will fight for a balanced budget and tax code reforms that make sense for Louisiana families.  A former officer in the U.S. Cavalry, Josh was deployed during Operation Iraqi Freedom and believes veterans benefits are a promise America owes the men and women, who proudly wore its uniform.  A believer in the wildcatter spirit that built South Louisiana, Josh understands the importance of our oil and gas industry and will stand up to any legislation that will interrupt the rebuilding of this vital bayou state economic engine.  And a true outdoorsman, Josh knows the vital role the Louisiana coast plays in the economy and safety of our state and country. He will be a loud voice in the continuing fight for coastal restoration.  Josh is pro-life and, being a lifetime member of the NRA, he is an adamant defender of the 2nd Amendment.

Josh has owned his own small-firm law practice since 2011.  He has fought for families throughout Southwest Louisiana while lecturing on Constitutional Law across multiple venues for several years.  He is admitted to practice in front of the US Supreme Court, The US District Courts in the Middle and Western Districts of Louisiana and before the Louisiana Bar.

Josh is passionate about our Acadiana culture and believes in giving back to our community. He has served as a proud voluntary youth football coach for several years.  Josh and his wife Jamie work together and raise their three children in Lafayette.

That’s a pretty similar persona to Higgins’, if you change out Higgins’ law enforcement background for that of a military veteran.

We haven’t seen any polling on the race, so we have no idea if this Giuliani fundraiser is the harbinger of some budding challenge to Higgins. We’ve seen no indication recently that Higgins is in any trouble. That said, two years ago there wasn’t much indication at this point Scott Angelle was in danger of losing the LA-3 seat, and he did.

More as it develops.

Interested in more national news? We've got you covered! See More National News
Previous Article SEABAUGH: What Really Happened At The End Of The Special Session On Monday
Next Article RAINEY: Louisiana Lost One Of Its Best With Randy Piedrahita’s Passing