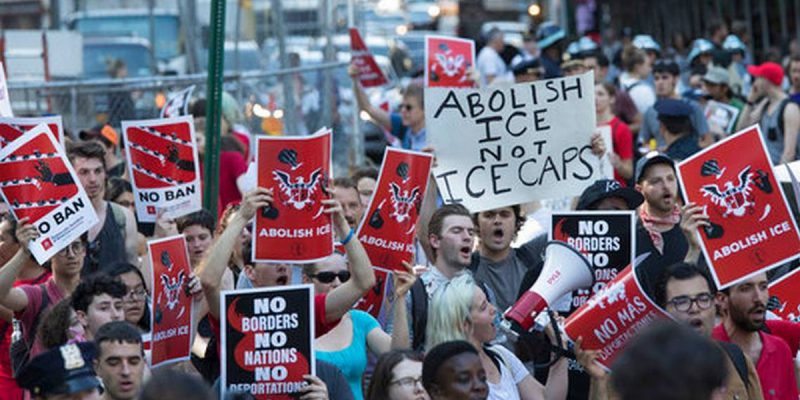 Many years ago, Democrats were known for their staunch support of peaceful protests and our First Amendment rights guaranteeing free speech. Today, party activists have become intolerant, hateful and, in too many cases, violent.

It seems that almost every week a Trump administration official or supporter is being badgered by leftist protesters. It happened to Homeland Security Secretary Kirstjen Nielsen at a restaurant and at her home. Both Senior White House Policy Advisor Stephen Miller and former EPA Administrator Scott Pruitt were recently harassed at restaurants. Of course, White House Press Secretary Sarah Huckabee Sanders and her family were not allowed to eat dinner at the Red Hen Restaurant in Lexington, Virginia because of her support for the President’s policies.

Even movie theaters are not save havens for Trump supporters. Florida Attorney General Pam Bondi, a staunch Republican and supporter of the President, was hounded by a menacing group as she was trying to attend a movie celebrating the life of the iconic television personality Mr. Rogers, an opponent of unfair treatment and bullying. Presumably, the leftist mob learned nothing about manners from the life of Mr. Rogers.

All of this mistreatment has been encouraged by some far-left activists and Democrat Party leaders like Congresswoman Maxine Waters (D-CA). At a June 23 rally in Los Angeles, Waters urged her supporters to continue the abuse. She said, “Let’s make sure we show up wherever we have to show up. And if you see anybody from that Cabinet in a restaurant, in a department store, at a gasoline station, you get out and you create a crowd. And you push back on them. And you tell them they’re not welcome anymore, anywhere.”

These incendiary comments are being taken literally by progressive agitators throughout the nation. This week, at a Whataburger restaurant in San Antonio, TX, Kino Jimenez, 30, attacked Hunter Richard, a 16-year-old Donald Trump supporter who was wearing an iconic “Make America Great Again” hat. Jimenez threw a drink in the teenager’s face, ripped off his hat and pulled out some of Richard’s hair in the process. Jimenez left the restaurant with Richard’s hat, showing no remorse for his violent behavior. In fact, he boasted that the hat was “going right in my f*** fireplace b***.” Fortunately, this was captured on video and police later arrested him for felony theft.

This type of insanity is happening throughout the country. According to liberal professor Alan Dershowitz, a woman at a party in Martha’s Vineyard threatened to “stab him through the heart.” The threat was issued because Dershowitz does not support the impeachment of Donald Trump. As Dershowitz correctly noted, “The Democrat Party has been taken over by radicals who have no interest in due process…. they don’t want any dissent, they don’t want any argument.”

What Democrats demand is total unity in their campaign to stop Donald Trump. To accomplish this goal, they encourage harassing Trump officials, supporters and average citizens. In too many instances, this campaign of persecution is morphing into actual violence.

It happened in Boynton Beach, Florida on Independence Day. Trump supporter Jeff Good was enjoying a fireworks presentation from his driveway. He also proudly displayed a Donald Trump flag on his lawn; however, this was unacceptable to a couple driving by in a vehicle. They demanded Good remove his flag, but he refused. As a result, Good was punched by the driver and dragged thirty feet in his car when his arm became caught in the door. Fortunately, he was able to escape with minor bruises, scrapes and cuts. At the current time, the local police are still investigating, and no arrests have been made.

Ever since Donald Trump was elected, this leftist violence has been escalating. Last summer, a deranged Bernie Sanders supporter tried to kill Republican congressmen at a baseball practice. Majority Whip Steve Scalise was seriously injured in the attack. U.S. Senator Rand Paul (R-KY) was attacked by his liberal Democrat neighbor while he was mowing the yard and last week his family was threatened by a Berkeley man who vowed to “kill” Paul and “chop up” his family “with an axe.”

At this point, it would be helpful if Democratic Party leaders issued a strong and unified statement condemning not only the violence, but also the hateful rhetoric and harassment. Until then, we should expect more of this dangerous behavior from the unhinged mob on the left. Let’s hope and pray no one is injured or killed for committing the “offense” of supporting Donald Trump.