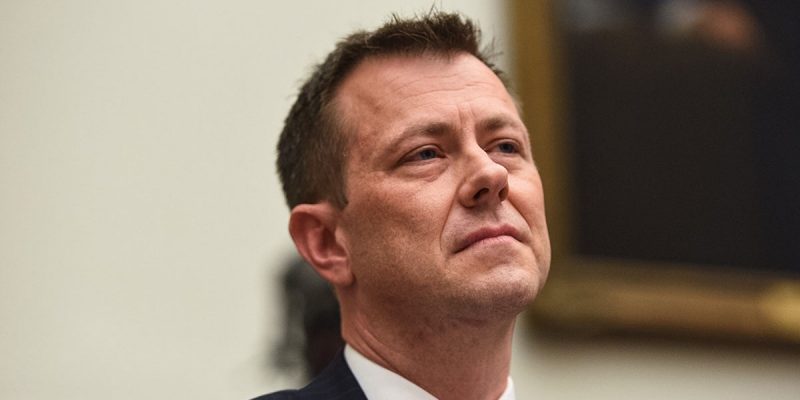 …had to do with his conduct of the Clinton e-mail investigation, and Strzok’s failure to run out all of its ground balls.

Last night during a Fox News appearance Rep. Louie Gohmert (R-Texas), who put on the biggest show of the entire Strzok hearing circus when he referenced Strzok’s extramarital affair with colleague Lisa Page which was the source of all of those embarrassing text messages on Strzok’s government-issued phone calling into question his impartiality, said he was sorry for the fireworks which ensued because they obscured something real which came out of the hearing.

The Intelligence Community Inspector General (ICIG) found an “anomaly on Hillary Clinton’s emails going through their private server, and when they had done the forensic analysis, they found that her emails, every single one except four, over 30,000, were going to an address that was not on the distribution list,” Republican Rep. Louie Gohmert of Texas said during a hearing with FBI official Peter Strzok.

“It was going to an unauthorized source that was a foreign entity unrelated to Russia,” he added.

Gohmert said the ICIG investigator, Frank Rucker, presented the findings to Strzok, but that the FBI official did not do anything with the information.

Strzok acknowledged meeting with Rucker, but said he did not recall the “specific content.”

“The forensic examination was done by the ICIG and they can document that,” Gohmert said, “but you were given that information and you did nothing with it.”

He also said that someone alerted the Department of Justice Inspector General Michael Horowitz to the issue.

“Mr. Horowitz got a call four times from someone wanting to brief him about this, and he never returned the call,” Gohmert said.

The ICIG previously caught problems regarding Clinton’s server that the FBI missed. The bureau didn’t notice that some emails were openly marked classified with a “(C)” when they were sent. (RELATED: FBI Missed Clinton Emails Openly MARKED Classified, Wanted To Conclude Probe Before IG Caught Mistake)

The ICIG spotted the oversight after the FBI missed it, texts between Strzok and his mistress, former FBI lawyer Lisa Page, show.

“Holy cow,” Strzok wrote, “if the FBI missed this, what else was missed? … Remind me to tell you to flag for Andy [redacted] emails we (actually ICIG) found that have portion marks (C) on a couple of paras. DoJ was Very Concerned about this.”

In late 2017, ICIG Chuck McCullough — who was appointed by former President Barack Obama —  took the unusual step of coming forward publicly to say that he perceived pushback after he began raising the alarm about issues with Clinton’s servers to then-Director of National Intelligence James Clapper.

He said he found it “maddening” that Democrats, including Sen. Dianne Feinstein of California, were underselling the amount of classified information on the server.

McCullough said he “expected to be embraced and protected,” but was instead “chided” by someone on Capitol Hill for failing to consider the “political consequences” of his investigative findings, Fox News reported.

If you’ll remember, when former FBI director James Comey (who was Strzok’s boss) conducted his media tour exonerating Clinton for the e-mail scandal, one of the assertions Comey made was that there was no evidence those e-mails on that private server had been accessed or that U.S. national security had been compromised.

That was an assertion which would have to be made were there to be any hope of maintaining the government’s position that Clinton’s conduct wasn’t prosecutable. The Espionage Act provision under which Clinton should have been indicted for her shoddy handling of classified information calls for gross negligence, rather than willful conduct, as the standard; Strzok and Comey concocted a description of “extreme carelessness” surrounding the operation of that private server. The only way that semantic, yet highly consequential, difference could survive is with an assertion that no harm was done.

But based on the ICIG’s findings it’s quite difficult to say no harm was done. A foreign entity, not Russia (China or Pakistan would be decent candidates) was able to gain access to American state secrets because of Clinton’s decision to leave documents unprotected.

And Strzok, who spent the entire day yesterday claiming that his vituperative anti-Trump exchanges with Page were irrelevant because his actions in conducting those investigations of Clinton’s e-mails and the Trump-Russia business were “without bias,” was flat-out lying. He can’t say that the record indicates his conduct met a high standard, not when he had available to him evidence of harm in the Clinton e-mail matter and did nothing about it.

Gohmert extracted this information, but couldn’t exploit it because he lost his cool and ripped into Strzok over the extramarital affair. That’s unfortunate, if to some degree excusable – Strzok did spend the entire day posing as a man of integrity and honesty, when all the while what underlay his testimony was the fact that he was a philanderer lying to the person he was closest to on the planet. That should have been enough to set any red-blooded member of that committee to apoplexy; it certainly did to Gohmert.

Interested in more national news? We've got you covered! See More National News
Previous Article LANDRY: In Combating Government Mismanagement and Medicaid, Trust But Verify
Next Article HVEEM: Believe It Or Not, The UN Is Actually Defending Free Speech Online