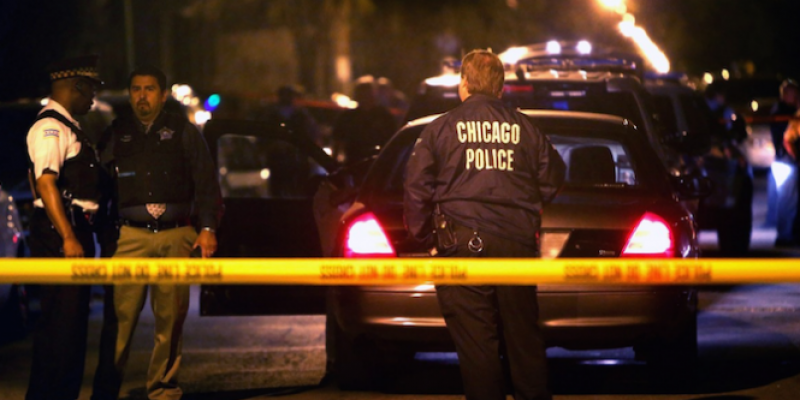 And this is good news … apparently because the number of shootings is down from last year by 30 percent; murders are down by 25 percent.

Yet the streets of Chicago are still like a war zone.

Most of the shooting occurred on Sunday, with at least 30 people shot between midnight and 3am. In one 2.5 hour time period, 25 people were hit in five different incidents.

“This is the worst I’ve ever seen it,” one police officer who was stationed outside a hospital told the Chicago Sun Times. “It’s hot right now. There’s a lot of tension … and it might get worse.”

According to news reports:

Police said in some of the cases shooters sprayed bullets indiscriminately into crowds in rival territories. The Tribune counted a total of more than 70 people shot between Friday evening and early Monday morning.

Giuliani supports Garry McCarthy, a former Chicago Police superintendent who is currently running to unseat mayor Rahm Emanuel. Many have demanded that Emanuel resign for his failure to keep the streets safe.

Since the end of July, the Tribune reports that 1,607 people were shot in Chicago in 2018.

In 2011 Kanye West’s song, “Murder to Excellence,” highlights the black-on-black violence in Chicago. He asks, “Is it genocide?”

“And I’m from the murder capital where they murder for capital. … It’s a war going on outside we ain’t safe from, I feel the pain in my city wherever I go, three hundred and fourteen soldiers died in Iraq, Five hundred and nine died in Chicago.”