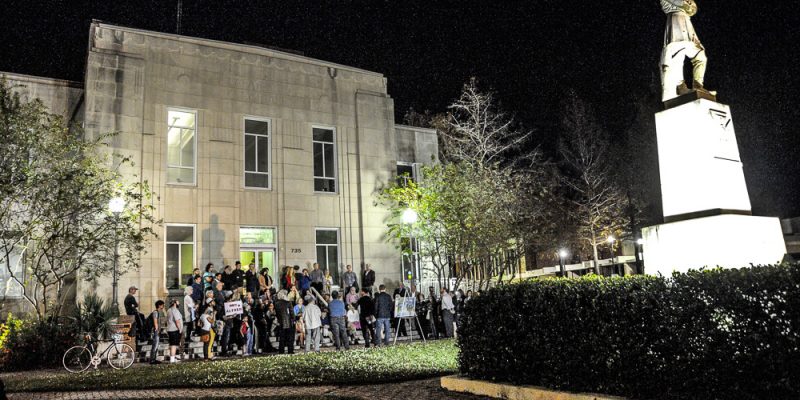 Anti-Confederate monument activists rallied in Lafayette tonight to call for the removal of a statue of Confederate General Alfred Mouton. The rally is billed as a commemoration of the 55th anniversary of Dr. Martin Luther King Jr.’s “I Have A Dream” speech.

Tonight, area pastors and community leaders will be in Lafayette to honor Dr. Martin Luther King, Jr. by calling for the removal of a Confederate-era monument.

The rally, organized by New Beginnings Christian Church in Lafayette, is planned as a commemoration of the 55th anniversary of Dr. King’s “I Have A Dream” speech.

Starting at 6:00 pm the “I Still Have a Dream” rally will take place near the statue of Confederate General Alfred Mouton located on the corner of Jefferson Street and Lee Avenue in Downtown Lafayette. Organizers say that participants will offer prayers, sing songs, and ask city leaders and residents to unite around the removal of the monument.

Speakers will include Fred Prejean with Move the Mindset and Ms. Marja Broussard of the NAACP, among others.

The monument was erected in 1922 by the Daughters of the Confederacy. The push to remove Confederate monuments has gathered steam since the removal of four monuments in New Orleans under then-Mayor Mitch Landrieu.

Who was Alfred Mouton?

“Alfred Mouton was the grandson of the man who is acknowledged as the founder of Lafayette, Jean Mouton,” according to Dr. Michael Martin, Director of the Center of Louisiana Studies at the University of Louisiana at Lafayette.

He was born into a family of ‘substance’ as Dr. Martin says. Alfred’s father, Alexander, was the Governor of Louisiana, U.S. Senator, and the largest landholder in Lafayette Parish. Alfred went to college at West Point in the 1840’s, and spent a couple of years in the U.S. Army. He went back to follow in his father’s footsteps as a planter after working as an engineer on the railroads. Then in the 1850’s he joined the Vigilante Committee, where he was second in command.

In 1860, when Abraham Lincoln was elected President, there was an immediate backlash throughout the entire South, which led to the movement of several southern states toward secession in 1861.

“After the Union arrives in Louisiana, Mouton is involved in trying to protect the area of his home, which is along Bayou Teche and along the Vermilion River,” said Martin.

When the Civil War began in 1861, Alfred commanded the 18th infantry regiment under General Richard Taylor. He died in the Battle of Mansfield in Louisiana at a young age of 35-years-old.

Now some of you may say that we shouldn’t “honor traitors” by having their monuments in public places. But according to the understanding of citizenship at the time, Mouton was not a traitor because they took up arms on behalf of their home states. This article from attorney Joe Ryan, which would you should read in full, explains it (bold and underline emphasis his).

The sovereignty in the United States is in the people of the States. And, thus, when, in 1860-1861, the people of the States, in convention assembled, agreed upon ordinances of secession from the Union, they did so in their sovereign capacity and upon the basis of the exercise of their sovereignty, never given up to the Federal Government in relation to their domestic affairs, their ordinances were legitimate. All true citizens of such a State, therefore, were duty bound to defend the State against the invasion of any foreign power, the rump of the United States included. This is just the simple legal and political truth of the matter as the founders understood the Constitution they framed for the Union.

These monuments were erected in the South to honor men who believed they were fighting an invasion from a foreign power. They should stay up to honor those who died for their home states.

Interested in more news from Louisiana? We've got you covered! See More Louisiana News
Previous Article FINALLY, There’s A U.S. Attorney Confirmed In The Eastern District Of Louisiana
Next Article APPEL: Respecting The Office Of The President, And Other Offices We Elect People To Fill