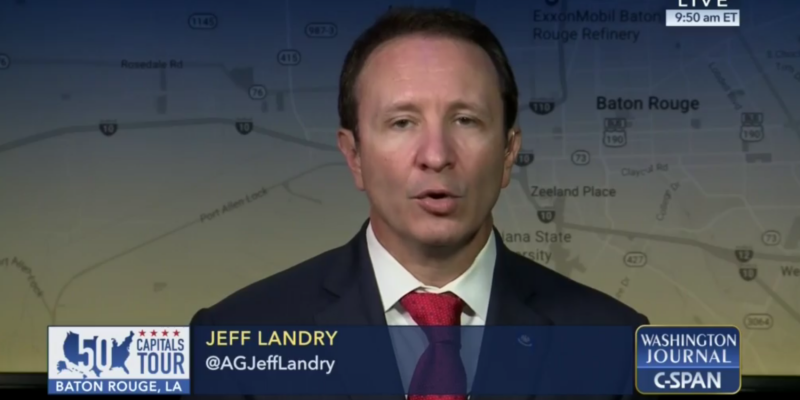 Increasing Medicaid costs, including through fraud, were at the heart of state budget battles in nearly every state this year, including Louisiana.

In 2017, 22 states faced budget shortfalls and at least 10 could not agree on a new budget before the start of their next fiscal year. Critics point out that legislators have been willing to cut funding to education, infrastructure, police and fire protection, but rarely to Medicaid. And while costs escalate, local politics prevent fraud from being adequately prosecuted, they argue.

In 2017, Medicaid’s annual cost nationwide was $595 billion, according to MACPAC, an agency the advises Congress on Medicaid policy. If current spending continues, its cost is projected to surpass $1.1 trillion by 2026. A mostly federally funded program offering limited free healthcare coverage to low-income citizens, Medicaid payments are distributed to about 20 percent of the population. Of these payments, states pay roughly 38 percent of the costs.

The U.S. Department of Health and Human Services states that 12 percent of total Medicaid spending in 2017 accounted for improper payments. In Louisiana, 12 percent translates to $1 billion, with the state footing $380 million of the bill, Baton Rouge CPA and Medicaid reform advocate Steve Gardes told Watchdog.org.

Louisiana’s annual Medicaid cost was $1.7 billion in 2008, about one third of its annual $3.3 billion cost today. If current spending continues, its projected cost would surpass $6.1 billion by 2026, Gardes said.

The Louisiana Legislative Auditor’s Office (LAO) recently identified $2.4 billion worth of Medicaid payments that were fraudulent and mismanaged. Its chief auditor, Darryl Purpera, characterized the Louisiana Department of Health’s (LDH) inability to manage the program as “willy-nilly, loosey-goosey oversight.”

The LAO calculated that roughly 208,000 applicants under Medicaid expansion “are possibly not eligible.” If that’s the case and with the average estimated Medicaid benefits per person annually at $4,900, that totals potentially $1 billion in erroneous or fraudulent payments.

The LDH also said that only 39 percent of adults on Medicaid in Louisiana filed a federal tax return – meaning there could be far more recipients who are disqualified. But by not sharing tax information among state agencies, detecting fraud becomes moot.

State Attorney General Jeff Landry stated that the Attorney General’s Medicaid Fraud Control Unit (MFCU) “found dozens of people who were unaware that according to LDH payments, they had received healthcare services.” The MFCU also identified some claims that were denied but were still paid in full. In other cases, managed care organizations (MCO’s) paid people who are not Louisiana residents, and others who are dead. One unlicensed MCO billed the Medicaid program, and was paid by taxpayers $6.9 million over 10 months.

Dr. Nick Oberheiden, managing partner of the Dallas-based national law firm Oberheiden and McMurrey, said that the primary fraud laws that apply to Medicaid providers are the False Claims Act, the Anti-Kickback Statute, and the Stark Law. Medicaid fraud involves “any method (either intentional or unintentional) of obtaining funds from Medicaid where (i) the funds are not properly owed, or (ii) the funds are used for an improper purpose (such as payment of referral fees).” Fraud can be charged as a civil or criminal violation, with potential penalties including “recoupments, fines, jail time, program exclusion.”

Purpera told Watchdog.org that in addition to the Attorney General, district attorneys and U.S. attorneys can prosecute Medicaid fraud under these laws.

Specific prohibitions and penalties vary by state, and three recent attempts made by Republican legislators never made it to a committee vote. Rep. Sherman Mack, R-Albany, introduced HB 163 to create a Medicaid Recipient Fraud Unit within the Attorney General’s Office and establish a process enabling the state to be reimbursed 50 percent of the cost.

Rep. Tony Bacala, R-Prairieville, introduced HB 156 and 480. The first would have extended the Task Force on Coordination of Medicaid Fraud Detection and Prevention Initiatives into 2019. The second would have required interagency sharing of taxpayer information.

The only bill that was signed into law by Gov. John Bel Edwards was Mack’s HB 88, which identified Medicaid fraud as a crime that includes recipient fraud.

As a result, Gardes said that the Attorney General’s Office has been “handcuffed” from pursuing Medicaid fraud on three fronts.

First, from pursuing provider fraud because of the LDH’s mismanagement of the program. Landry argues that once fraud is detected, the LDH “does not follow the rules to root out the waste. Rather than conduct on-site visits as required by policy, they settle for self-attestations – promises from the subjects that all is well. LDH does not even require the MCO’s to report whom they are contracting to provide services – making it impossible to verify if they are qualified and licensed.”

Second, because of a policy change under the Obama administration that only specifies Medicaid fraud as provider fraud, not recipient fraud. The federal government will reimburse states a partial amount for costs associated with pursuing provider fraud, but not recipient fraud. Mismanagement also resulted in only 18 cases out of more than 200,000 being referred for prosecution.

Third, not everyone in state government is “on the same page.” According to minutes from the Task Force’s October 2017 meeting, the governor’s office and LDH are not on “the same page” as the MFCU, LAO and Attorney General’s Office. The former is preventing the prosecution of Medicaid fraud, while the latter was working with the legislature to craft legislation to make it easier to prosecute fraud. Targeting recipients and sharing tax information in some respects, targets voters, which is a political quagmire for Democrats who claim they rely on low-income voters for support.

“Unfortunately, State Senate Democrats have killed in committee every proposal to reduce Medicaid spending,” Gardes told Watchdog.org. “Democrats say they are protecting the poor and elderly; a closer look indicates they are only protecting those who are fraudulently claiming to be poor, those who are poor because they don’t want to work, and political donations from the Nursing home lobby.”

“For the last two and a half years, John Bel [Edwards] and his allies have tried to guard the taxpayers’ hard-earned money” and “refused to solve the problem, instead choosing to play politics and ‘the blame game,’” Landry said. The governor has “all but accused us of waging war on the poor. These false attacks are coming from the same failed politicians who threatened LSU football, scared the sick in nursing homes, and used every bully tactic known to man in order to raise our taxes to fund their unsustainable government growth.”

Purpera expressed some level of hope toward fixing the problem, telling Watchdog.org, “I’m looking forward to working with management of the Department of Health in correcting the deficiencies within internal processes that have allowed billions of dollars in Medicaid claims, paid by state contractors, to be accepted without adequate data to support the claims.”

Edwards’ office did not respond to requests for comment from Watchdog.org.