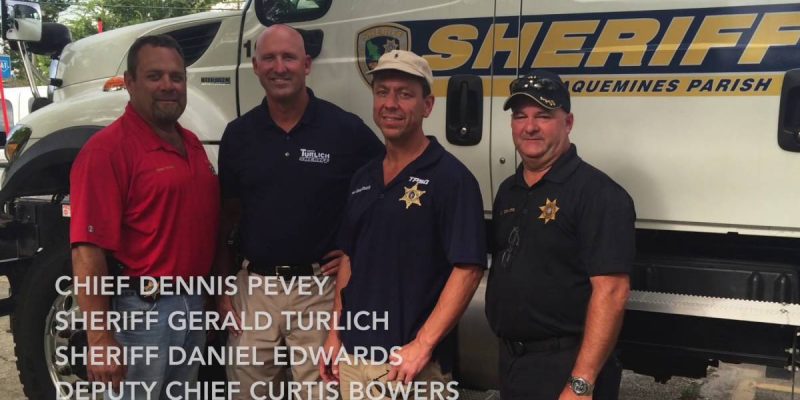 …for being a member of the Proud Boys. So much for freedom of association in Plaquemines Parish.

The Plaquemines Parish Sheriff’s Office on Thursday (Aug. 16) terminated Brian Green, the deputy said to be a member of the Proud Boys, a far-right organization that some have categorized as a hate group.

Green was fired after an internal affairs investigation determined that he violated the department’s social media policy, according to a statement released by the Sheriff’s Office.

Under the policy, Sheriff’s Office personnel cannot engage in social media activity that “negatively affects the public perception of the Plaquemines Parish Sheriff’s Office” or engage in speech “that would reasonably be considered reckless or irresponsible,” the statement said.

Internal affairs began investigating on Aug. 8 after receiving Facebook screenshots and other images purportedly showing Green’s affiliation with the Proud Boys, a conservative, men-only group whose members describe themselves as “Western Chauvinists.”

According to the Proud Boys’ website and social media pages, the group eschews racial guilt and extolls gun rights, closed borders, minimal government and the “veneration of the housewife.”

Not to put too fine a point on yesterday’s developments, but this is bullshit.

Do you want to know who the Proud Boys are? Here’s Gavin McInnes, who founded the organization – it’s a men’s club, not a gang or a hate group, for crying out loud – talking about what it is…

McInnes isn’t some white supremacist. He’s a conservative commentator whose focus is the culture, and he’s an opponent of the cultural Marxists who are trying to silence speech which 20 years ago was completely mainstream (and generally still is once you get away from the conventional wisdom of the academic and cultural elites).

As for the Proud Boys, they’re being labeled “alt-right” or “far right” because on a few occasions members of that fraternal organization have been in street fights with Antifa. Like, for example, when McInnes was scheduled to give a speech at New York University and Antifa thugs attempted to start a riot to deplatform him – it was Proud Boys members who jumped in to keep McInnes from being beaten to a pulp.

But somehow, proclaiming that you like Western culture and society while living in the United States, which is the epicenter of it, makes you unacceptable – and Brian Green, who’s never had a single disciplinary issue while working as a Plaquemines sheriff’s deputy, loses his job for that sin.

Jerry Turlich is the sheriff of Plaquemines Parish, and his bio at his office’s website is profuse with his boasting about what a paragon of Western culture he is (he can’t even get two lines in before bragging of his “Christian values,” and then launches into what a bad-ass athlete he was in high school, blah blah blah). But Turlich fired Green because he says the Proud Boys are inconsistent with the values of the Plaquemines sheriff’s department.

What values are those?

Turlich was, after all, in the inner circle of disgraced former sheriff Jiff Hingle, who was taken down on a bribery charge. Turlich also made a nice chunk of change in oil spill contracts due to that association. Does that indicate Turlich is a crook? Who can say? Plaquemines has had almost nothing but crooks in public office since the Perez family ruled it as a fiefdom for most of the 20th century.

So be it. You can’t hold a government job if you’re a member of the Proud Boys. That’s today’s lesson.

If that’s the case, I have a suggestion. From my American Spectator column this morning…

So here’s what should happen from now on. From now on it’s time to scour the Facebook and Twitter accounts of every public employee we can find, and any one of them — teachers, librarians, bureaucrats, cops, sanitation workers, bus drivers — who show themselves to be members of Antifa or Black Lives Matter ought to be named and shamed, and hounded out of their jobs.

Because if we don’t have the First Amendment right to belong to what clubs we want, when those clubs aren’t “racist” or “supremacist” or “bigoted” — the only people calling the Proud Boys a “hate” group are the scam artists at the Southern Poverty Law Center, for crying out loud, and any credibility the SPLC ever had was gone long ago, and the cyberfascists who run Twitter — then what’s sauce for the goose is appropriate for the gander. Let’s have a little Social Justice for everyone, and let’s see how the other side likes it.