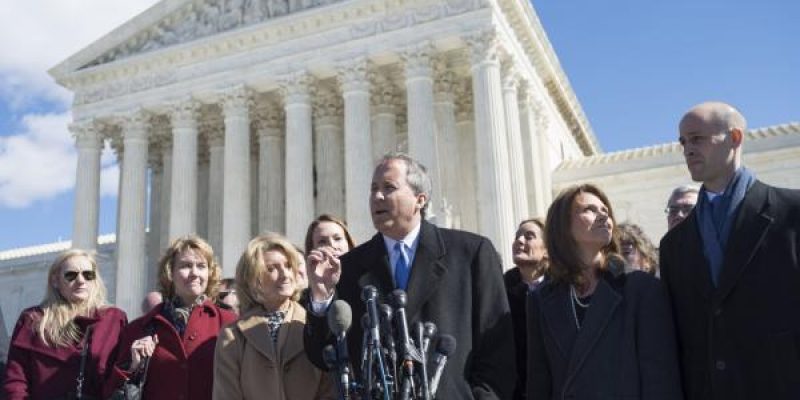 Texas Attorney General Ken Paxton, who sued in February, is leading a 20-state coalition along with Wisconsin Attorney General Brad Schimel to fight against the Affordable Care Act (ACA), otherwise known as Obamacare.

The ACA was enacted in March 2010, which was advertised as providing affordable and accessible health insurance for households with incomes between 100 to 400 percent of the federal poverty level. However, it hasn’t done that. Instead, millions of people who had health insurance lost their health insurance. Everyone with a reportable income who earned enough money was required to purchase health insurance through a marketplace system. Those who didn’t were required to pay a hefty fine.

Those whose incomes fell below the required threshold were put onto state Medicaid programs, if they qualified, and if the state accepted extended Medicaid enrollees.

Paxton, who filed the lawsuit in February, is leading a 20-state coalition along with Wisconsin Attorney General Brad Schimel, argues that the ACA violates the Tenth Amendment, and requires people to purchase a healthcare plan that they don’t want or need, which is unconstitutional. Additionally, those who already had health insurance were forced to lose it or pay for more money for less coverage; some losing doctors and treatment they’d had for years.

“From the outset, Obamacare’s individual mandate caused countless Americans to purchase insurance they don’t need or enroll in programs that put a tremendous financial burden on Texas and other states,” Paxton said. “The sooner Obamacare is enjoined, the better, so that states and individuals can prepare to operate freely again without the stranglehold of a failed Obama-era social experiment.”

The Washington Post argues that the “ACA lawsuit could jeopardize 52 million Americans’ access to health care.” But this is not true. It would reduce the burden on the taxpayer and limit federal spending on programs, which at a minimum 20 percent are wasted to fraudulent claims.

Medicaid expansion under the ACA, for example, has crippled state budgets and required the taxpayer on multiple fronts to pay for reduced and inferior services for recipients who are not required to work, and who in many cases are illegal aliens and or do not qualify to receive benefits but do because of failed state oversight.